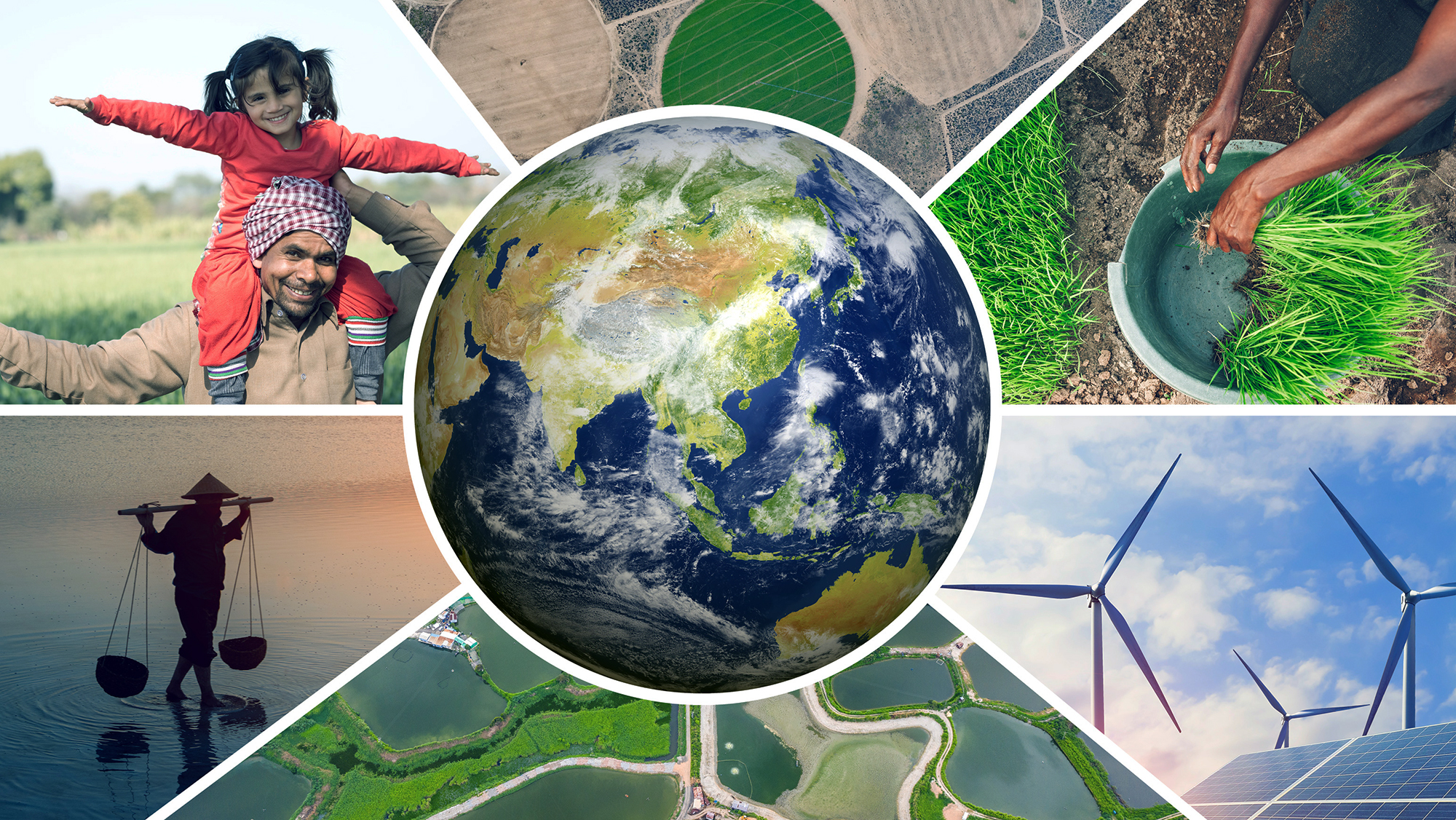 This article originally appeared on MIT News on July 30, 2020.

With a founding $25 million gift from King Philanthropies, MIT’s Abdul Latif Jameel Poverty Action Lab (J-PAL) is launching a new initiative to solve problems at the nexus of climate change and global poverty.

The new program, the King Climate Action Initiative (K-CAI), was announced today by King Philanthropies and J-PAL, and will start immediately. K-CAI plans to rigorously study programs reducing the effects of climate change on vulnerable populations, and then work with policy makers to scale up the most successful interventions.

“To protect our well-being and improve the lives of people living in poverty, we must be better stewards of our climate and our planet,” says Esther Duflo, director of J-PAL and the Abdul Latif Jameel Professor of Poverty Alleviation and Development Economics at MIT. “Through K-CAI, we will work to build a movement for evidence-informed policy at the nexus of climate change and poverty alleviation similar to the movement J-PAL helped build in global development. The moment is perhaps unique: The only silver lining of this global pandemic is that it reminds us that nature is sometimes stronger than us. It is a moment to act decisively to change behavior to stave off a much larger catastrophe in the future.”

K-CAI constitutes an ambitious effort: The initiative intends to help improve the lives of at least 25 million people over the next decade. K-CAI will announce a call for proposals this summer and select its first funded projects by the end of 2020.

“We are short on time to take action on climate change,” says Robert King, cofounder of King Philanthropies. “K-CAI reflects our commitment to confront this global crisis by focusing on solutions that benefit people in extreme poverty. They are already the hardest hit by climate change, and if we fail to act, their circumstances will become even more dire.”

There are currently an estimated 736 million people globally living in extreme poverty, on as little as $1.90 per day or less. The World Bank estimates that climate change could push roughly another 100 million into extreme poverty by 2030.

As vast as its effects may be, climate change also presents a diverse set of problems to tackle. Among other things, climate change, as well as fossil-fuel pollution, is expected to reduce crop yields, raise food prices, and generate more malnutrition; increase the prevalence of respiratory illness, heat stress, and numerous other diseases; and increase extreme weather events, wiping out homes, livelihoods, and communities.

With this in mind, the initiative will focus on specific projects within four areas: climate change mitigation to reduce carbon emissions; pollution reduction; adaptation to ongoing climate change; and shifting toward cleaner, reliable, and more affordable sources of energy. In each area, K-CAI will study smaller-scale programs, evaluate their impact, and work with partners to scale up the projects with the most effective solutions.

Projects backed by J-PAL have already had an impact in these areas. In one recent study, J-PAL-affiliated researchers found that changing the emissions audit system in Gujarat, India, reduced industrial-plant pollution by 28 percent; the state then implemented the reforms. In another study in India, J-PAL-affiliated researchers found that farmers using a flood-resistant rice variety called Swarna-Sub1 increased their crop yields by 41 percent.

In Zambia, a study by researchers in the J-PAL network showed that lean-season loans for farmers increased agricultural output by 8 percent; in Uganda, J-PAL affiliated researchers found that a payment system to landowners cut deforestation nearly in half and is a cost-effective way to lower carbon emissions.

Other J-PAL field experiments in progress include one providing cash payments that stop farmers in Punjab, India, from burning crops, which generates half the air pollution in Delhi; another implementing an emissions-trading plan in India; and a new program to harvest rainwater more effectively in Niger. All told, J-PAL researchers have evaluated over 40 programs focused on climate, energy, and the environment.

By conducting these kinds of field experiments, and implementing some widely, K-CAI aims to apply the same approach J-PAL has directed toward multiple aspects of poverty alleviation, including food production, health care, education, and transparent governance.

A unique academic enterprise, J-PAL emphasizes randomized controlled trials to identify useful poverty-reduction programs, then works with governments and nongovernmental organizations to implement them. All told, programs evaluated by J-PAL affiliated researchers and found to be effective have been scaled up to reach 400 million people worldwide since the lab’s founding in 2003.

“J-PAL has distinctive core competencies that equip it to achieve outsized impact over the long run,” says Kim Starkey, president and CEO of King Philanthropies. “Its researchers excel at conducting randomized evaluations to figure out what works, its leadership is tremendous, and J-PAL as an organization has a rare, demonstrated ability to partner with governments and other organizations to scale up proven interventions and programs.”

K-CAI aims to conduct an increasing number of field experiments over the initial five-year period and focus on implementing the highest-quality programs at scale over the subsequent five years. As Starkey observes, this approach may generate increasing interest from additional partners.

“There is an immense need for a larger body of evidence about what interventions work at this nexus of climate change and extreme poverty,” Starkey says. “The findings of the King Climate Action Initiative will inform policy makers and funders as they seek to prioritize opportunities with the highest impact.”

King Philanthropies was founded by Robert E. (Bob) King and Dorothy J. (Dottie) King in 2016. The organization has a goal of making “a meaningful difference in the lives of the world’s poorest people” by developing and supporting a variety of antipoverty initiatives.

J-PAL was cofounded by Duflo; Abhijit Banerjee, the Ford International Professor of Economics at MIT; and Sendhil Mullainathan, now a professor at the University of Chicago’s Booth School of Business. It has over 200 affiliated researchers at more than 60 universities across the globe. J-PAL is housed in the Department of Economics in MIT’s School of Humanities, Arts, and Social Sciences.
Last fall, Duflo and Banerjee, along with long-time collaborator Michael Kremer of Harvard University, were awarded the Nobel Prize in Economic Sciences. The Nobel citation observed that their work has “dramatically improved our ability to fight poverty in practice” and provided a “new approach to obtaining reliable answers about the best ways to fight global poverty.”

K-CAI will be co-chaired by two professors, Michael Greenstone and Kelsey Jack, who have extensive research experience in environmental economics. Both are already affiliated researchers with J-PAL.

Greenstone is the Milton Friedman Distinguished Service Professor in Economics at the University of Chicago. He is also director of the Energy Policy Institute at the University of Chicago. Greenstone, who was a tenured faculty member in MIT’s Department of Economics from 2003 to 2014, has published high-profile work on energy access, the consequences of air pollution, and the effectiveness of policy measures, among other topics.

Jack is an associate professor in the Bren School of Environmental Science and Management at the University of California at Santa Barbara. She is an expert on environment-related programs in developing countries, with a focus on incentives that encourage the private-sector development of environmental goods. Jack was previously a faculty member at Tufts University and a postdoc at MIT between 2010 and 2011, working on J-PAL’s Agricultural Technology Adoption Initiative.

Climate Action
Give to MIT