A New Home for the MIT Museum 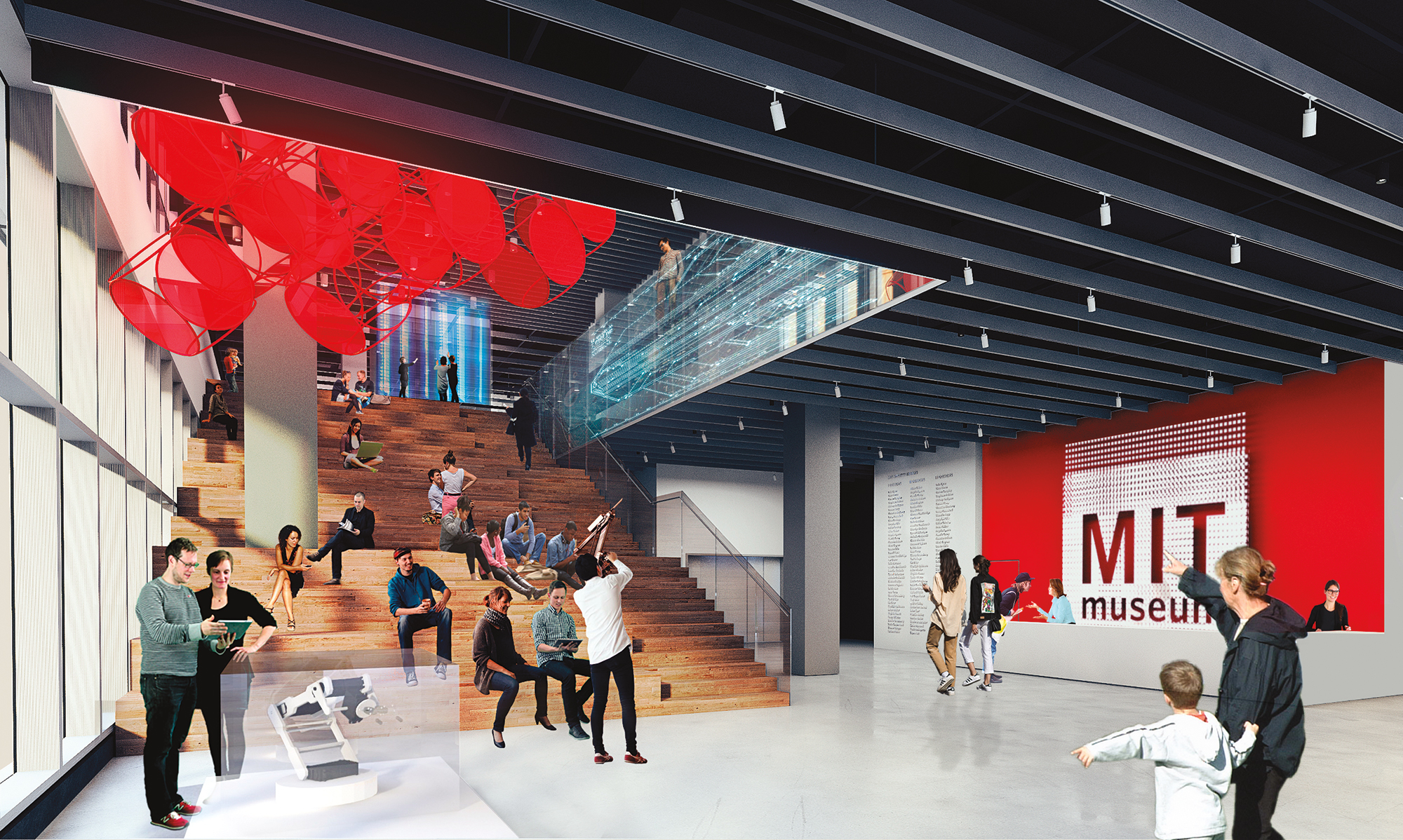 A few years ago, while they were drafting a strategy to renovate the MIT Museum’s nearly 50-year-old home on Massachusetts Avenue, J. Meejin Yoon and Eric Höweler were invited to tour the museum’s warehouse on Tyler Street in Boston. The warehouse is a repository for the many holdings not on display at its public headquarters across the river.

“They brought us there to give us a sense of the depth and breadth of the collection,” says Yoon, who became head of MIT’s Department of Architecture in 2014 (she departed MIT in January 2019 to become dean of the College of Architecture, Art and Planning at Cornell University). “And it worked. There was a vast array of objects across all scales. Hundreds of slide rules. Decades of scientific instruments. Incredible drawings. Mainframe computers. Aircraft models. It was like experiencing the continuum of innovation and MIT’s contribution to it.”

Future visitors to MIT will be able to share that exhilaration—“we have very ambitious plans for what we’re going to exhibit,” says John Durant, the Mark R. Epstein (Class of 1963) Director of the MIT Museum—but it won’t be at the original location. Today, Höweler and Yoon are designing the interior architecture for a new MIT Museum, a 57,000-square-foot medley of galleries, classrooms, and state-of-the-art program spaces scheduled to open to the public in late 2021 on Main Street in bustling Kendall Square.

The new MIT Museum will be a magnet for local community members, for academics and prospective students, and for visitors from around the world. In addition to showcasing MIT’s unique contributions to technologies of all stripes and sizes—from engineering to architecture to aeronautics—the Kendall Square venue will also present current work from MIT students and faculty and include open education and research spaces that will expose the public to the unique spirit of innovation that powers MIT. “We think of the museum as a meeting ground,” says Durant—“a place for being stimulated by galleries and then having a chance to discuss and exchange ideas. That fundamental role will be reflected in the layout of the new space.”

Yoon is intimately familiar with the nuances of creating spaces that convey MIT’s culture. She designed the on-campus memorial for Officer Sean Collier, an MIT police officer who was slain in April 2013 in the aftermath of the Boston Marathon bombings. That project culminated in a solemn five-way arch built out of 32 massive granite blocks. The monument is intended to represent an open hand, a gesture that symbolizes MIT’s commitment to a culture of accessibility, and to its community ties.

“So many of our current innovations aren’t tangible,” says Neumann. “We need to design spaces in the museum that can serve as platforms for interchangeable and faster-paced stories.”

The MIT Museum project was less emotionally charged, but no less delicate. The architects had to shape a space that could transmit a sense of the Institute and its mission, this time not as a memorial, but as a threshold. Working closely with the MIT Museum staff, and in even closer collaboration with Höweler, who earlier in his career had helped design Boston’s Institute of Contemporary Art, Yoon eventually crafted a design that reflects not only MIT’s values, but its feel. “I began thinking about one of MIT’s most significant spaces—the Infinite Corridor. It is a space that runs through so much of the MIT campus, touches so many departments, and connects Massachusetts Ave. with Kendall Square,” says Yoon. “And that led me to think about how we might bring that element of MIT-ness—the element of circulation and connectedness—to the museum.”

In Höweler and Yoon’s plan for the new museum, the Infinite Corridor is transposed into a spiral that connects the ground level with gallery spaces, performance spaces, and curatorial and administrative offices above. Glass walls will mute the barrier between museum and street.

While the museum staff will be able to control the illumination in the exhibition areas, there will be ample daylight streaming into every corner.

“These elements erase the sharp distinctions between public and private, between visitors and curators, and between MIT and the surrounding community,” says Yoon. “The new space will be organized in a way that makes sense for a 21st-century museum. It will enable the museum to be visionary, adaptable, and generous in telling the MIT story in a way that the current space cannot do.”

Telling that story—an amalgam of many stories—will animate every aspect of the MIT Museum’s new home, from its architecture to its programming to its temporary and permanent exhibitions. “We intend to present objects and achievements in the context of a narrative that will illustrate key moments of MIT,” says Ann Neumann, director of galleries and exhibitions at the MIT Museum. “Through these narratives, we can begin to chart the discoveries made at MIT that are changing our understanding of ourselves, and of the world.”

Neumann, who came to MIT three years ago specifically to develop an exhibition program for the new museum, concedes that MIT’s breadth will compel her staff to be quite agile. “From one era, we can display robots and airplane wings, technologies we can see and touch,” she explains.

“But so many of our current innovations aren’t tangible, in areas like artificial intelligence, life sciences, or nanotechnologies. We need to design spaces in the museum that can serve as platforms for interchangeable and faster-paced stories. We don’t want to be constrained by traditional museum forms or themes.”

Along with illustrating MIT’s past, present, and future, Neumann intends for the new museum to serve as a center of learning and debate about the role of innovation and technology. “We aspire to be much more than a series of exhibition spaces,” she says. “Our educational and public assembly spaces will offer a venue for visiting students and the general public to examine the impact of some of these technologies that MIT is helping to develop, and to ask what kinds of choices we as citizens need to make to create a better future.”