At Home With Fusion Research 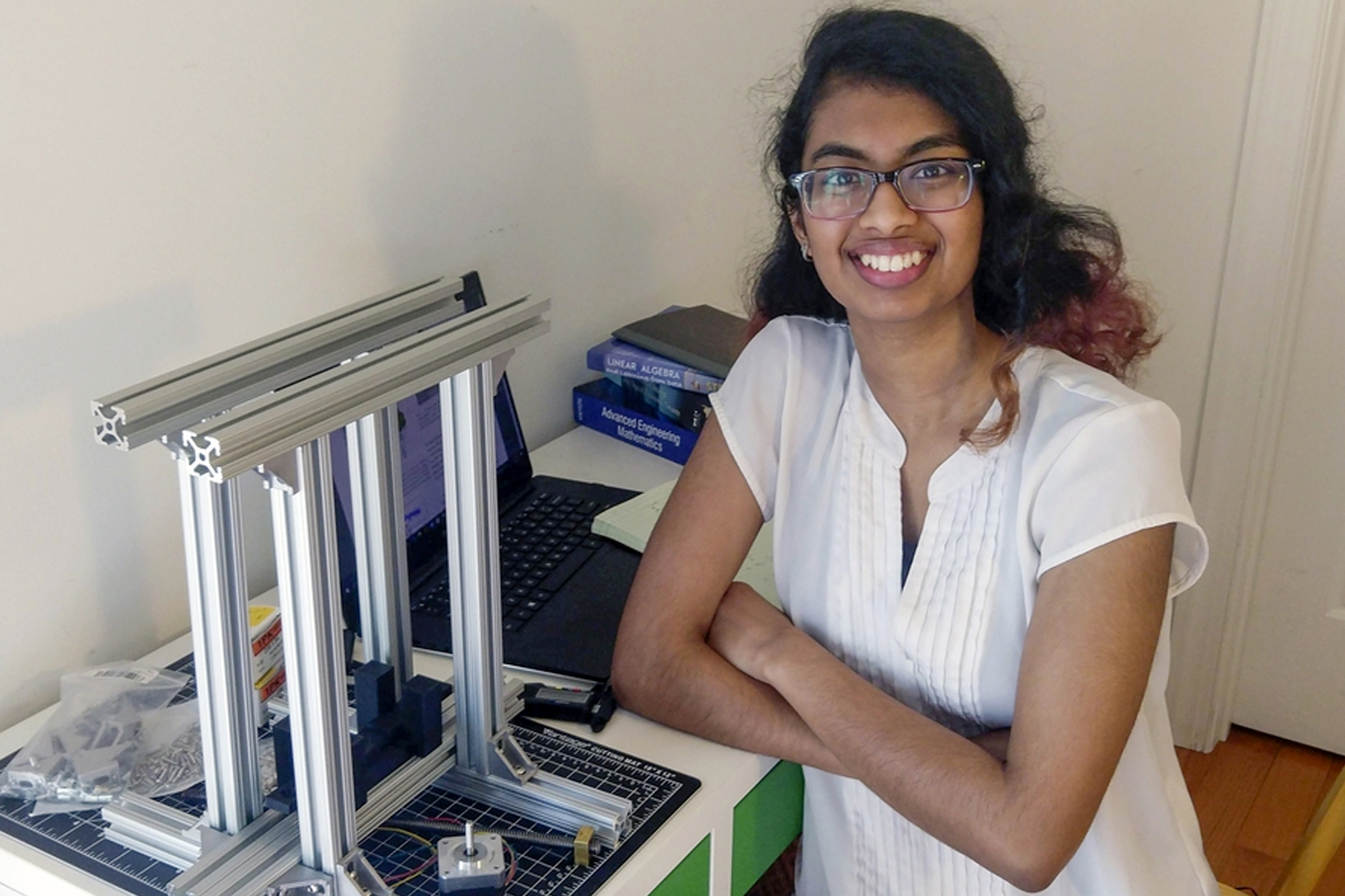 This article originally appeared on MIT News on July 8, 2020.

Sreya Vangara was ready to get her hands dirty. In February, the sophomore was starting her first Undergraduate Research Opportunity Program (UROP) project at the MIT Plasma Science and Fusion Center (PSFC), having spent two semesters more theoretically occupied writing algorithms for self-driving cars. Now she would be working on MIT’s latest fusion experiment, SPARC. Under the guidance of PSFC Director Dennis Whyte and Commonwealth Fusion Systems (CFS) Chief Scientific Officer Brandon Sorbom PhD ’17, she would be developing a data acquisition and testing system for its new superconducting magnet technology.

But in March, when concerns about the coronavirus forced her to leave MIT, she found herself 450 miles from campus, and needing to reorient her approach to the project for both the spring and summer sessions.

Vangara had been intrigued by the PSFC ever since a field trip with her Maryland middle school class introduced her to the Alcator C-Mod tokamak, a fusion experiment that was retired in 2016 after 20 years of operation. She credits the experience with launching her interest in physics.

“There are photos of me in the eighth grade, absolutely tiny, with a neon baseball cap just looking up at Alcator C-Mod,” she remembers. “I thought, ‘This is so cool. I want to be here when I’m in college.’ This got me crazy into nuclear science.”

After this visit to MIT, her middle and high school trajectory expanded to include the physics team and theoretical physics club. She focused on physics-themed projects for the local science fair, in the process receiving an award from the Nuclear Regulatory Commission (NRC), and later winning a sub-competition allowing her to present a nuclear evacuation plan she designed to the NRC commissioner. Her interest in engineering also grew, prompting her to join the robotics team, eventually becoming its captain.

“I loved being able to make things with my hands, to design something and see it brought to life.”

It was this interest that motivated the electrical engineering and computer science major to contact Whyte about a UROP, expressing an enthusiasm for nuclear physics, but confessing she knew little of the subject. As she interviewed with PSFC research staff she became certain this was the laboratory for her.

Mid-semester, Vangara was entering the most hands-on portion of her UROP project, which sought to develop a testing system for short lengths of the high-temperature superconducting (HTS) tape that would be used to create magnets for the SPARC tokamak. Electromagnetic testing of this hardware required a data acquisition and control system capable of handling data inputs on the order of 100 to 1,000 samples per second, as well as precise measurement of low voltages.

She was beginning work on a testing box that contained various sensors, microcontrollers, and power supplies that would be hooked up to different testing systems, including a reel-to-reel procedure to measure the properties of the magnetic tape samples. Because she drove home to Maryland, she was able to take many of the materials she needed with her, and have other parts shipped.

“I was able to complete a lot of the testing box by myself with the tools I brought—soldering iron, power drill, and screwdriver. But I wasn’t able to test it with HTS samples because I wasn’t in the lab.”

As a result, she pivoted to working on the data acquisition software—adding different kinds of functionality, like improving the simulated data system so she could work on it by herself, adding automated data backup to the server, and including different kinds of sensor suites in the software so it could record more types of data with a single experiment.

“That’s one of the big reasons I love computer science,” she admits. “You can do it anywhere, anytime. My goal by the end of summer, though, is to actually produce a working data acquisition system, along with a prototype reel-to-reel apparatus that will automate the testing of multiple samples along one long spool of HTS tape. You can imagine that’s kind of hard to do in a bedroom.”

But Vangara looks on the bright side, noting her situation has allowed her to focus on mining the experience of other researchers, like Jessica Cheng, who, as PSFC visiting scientist and CFS high-temperature superconductor engineer, directly oversees the project.

“Being able to have their expertise applied to the problems I’m working on is definitely one way to mitigate not being able to run the experiments in person. Because I might not know how the material will react under certain conditions, but I can ask a material scientist who knows significantly more about that than I do, who can help me come up with a better solution.”

Vangara’s maintained this flexibility and optimism in other areas of her student life. As an undergraduate teaching fellow in MIT’s Terrascope program, an environmental engineering first-year learning community, she was overseeing one of several groups tasked with examining aspects of infrastructure rehabilitation and rebuilding in Puerto Rico after hurricanes.

Working with the Boys and Girls Club of a town in Puerto Rico, Vangara’s group was designing and beginning to build an emergency tent for people displaced by natural disasters, when they were sent home.

“My students’ goal was to actually build this tent; it was made out of wood and PVC,” she says. “It was huge. Five of us could fit in it. Now, you can’t really make a five-person tent by yourself.”

But Vangara was intent that the students should end the semester feeling they had gained skills that would help them during their engineering journey at MIT. And she wanted their client to feel they had come up with an implementable solution. She guided her students toward different computer-aided design (CAD) workshops and softwares, emphasizing the importance of being able to verify a design before building, and enabling them to model their entire design.

“At the very least, the students were able to send these CAD engineering diagrams and models to the clients and community members to show here is a product you can build. We’ve put it together virtually; you might be able to put it together physically.”

The tent project, conceived in fall 2019, has had some unexpected applications this summer. Members of the class are now working with representatives from Puerto Rico to adapt the tent as a Covid-19 emergency shelter.

“So many people in Puerto Rico are still displaced. Keeping lots of people together in one area is dangerous and unhealthy. So, if you have these standalone structures that can fit a family or a few people, it dissipates the effects of being close to others while still providing shelter.”

Vangara is also working remotely with Mexico this summer. In past summers, she has been involved with the MIT International Science and Technology Initiative (MISTI), teaching in Kazakhstan, Hong Kong, and Mexico. With the program on hiatus, Vangara is still finding time to connect virtually with the Mexican schools and local teachers she has worked with, hoping to further the STEM education of the girls she taught last summer.

Her work as events chair on the board of the MIT Brain Trust, and her activities for the MIT Medical Consumers’ Advisory Council, have also gone virtual, as well as her stint as WMBR radio host. She notes that her only MIT activity that did not translate to a virtual setting was pistol team practice.

“I’m trying to get a taste of everything,” she laughs. “But there really is no way to practice pistol at home.”

Like the MIT students she has mentored, Vangara has proven skilled at adapting to circumstances beyond her control, an ability that is preparing her for the vicissitudes of fusion research. Despite the challenges she and the PSFC have experienced, she remains adamantly optimistic about the future of MIT’s new tokamak experiment.

“SPARC is going to bring us net energy fusion,” she says. “Not ‘hopefully.’ It will!”