Building on the MIT Experience 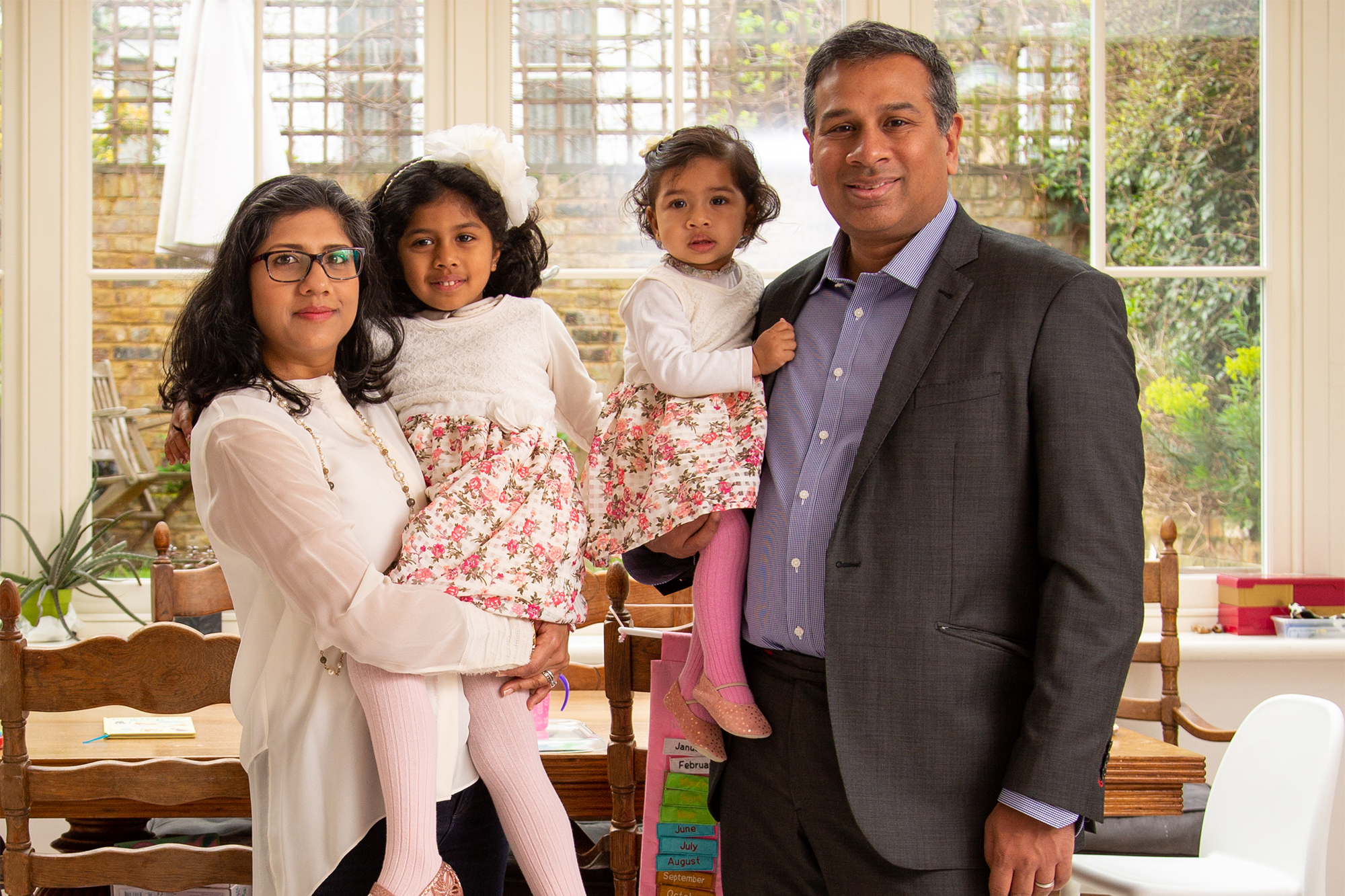 For Pappudu Sriram ’96 and Rajesh Venkataramani MBA ’00, PhD ’00, MIT provided the skills and experiences that would lead them into exciting careers. Years later, the MIT community remains a central point of connection in their lives for friendships, shared values, and ever-expanding interests.

The couple, who go by Pop and Raj, were introduced by friends in the MIT South Asian Association of Students (SAAS). Both grew up in the US, in families that emigrated from South India in the 1960s. Today they reside in London, where Raj is a partner at Goldman Sachs, and Pop, who spent nearly 20 years with the Boston Consulting Group (BCG), is devoting her days to the care of their daughters, ages 4 and 1. Raj completed his doctorate under the mentorship of Klavs F. Jensen, Warren K. Lewis Professor of Chemical Engineering, and also earned an MBA from MIT Sloan. The combination, he says, has served him incredibly well, from the first “burst” of professional achievement when he drew directly on his PhD research, to professional growth supported by communication and problem-solving skills.

The skills Pop acquired at MIT (and later at Harvard Business School) fueled her success at BCG, where she was made partner. “I loved my time at MIT,” she says. “It was a period of huge growth in many different dimensions.” Her fondest memories include a course from the late Hartley Rogers Jr., math professor, champion rower, and renaissance man; and the challenges and skill-building opportunities she learned as a team leader in the seminal 2.70 (now 2.007) Introduction to Design and Manufacturing class taught by Woodie Flowers SM ’68, MEng ’71, PhD ’73, who is now the Pappalardo Professor Emeritus of Mechanical Engineering. Pop also credits extracurricular activities, like the women’s rowing team and her Kappa Alpha Theta sorority, with cultivating vital skills.

“All my MIT experiences helped me develop a problem-solving mindset that I really enjoyed and was good at, and that segued into my career at BCG.”

To extend MIT education to a new generation, Pop and Raj have created an unrestricted scholarship fund at MIT. “We want MIT to be able to get the best people without any constraints and provide others the opportunities that we had.”

“Education is the best investment you can make in anybody,” Pop adds. “That’s at the core of our family values.” At the Alumni Leadership Conference she attended in spring 2017, Pop was impressed with MIT’s efforts to build strengths and address critical challenges. “It’s clear that the financial environment for institutions like MIT is increasingly challenging,” she says. Through their scholarship fund, they hope to be part of the solution.

With their daughters, Pop and Raj are enjoying the abundant offerings of London, including museums, cultural institutions, parks, and family-friendly events around the city. They are also active in the MIT Alumni Club of Great Britain, and they helped to host a London-based celebration of the MIT Campaign for a Better World in 2017.

For Pop and Raj, the words “better world” speak to a core MIT quality: what Pop describes as “an intrinsic interest in the world, and in doing things for the good of the planet and other people.” She adds, “I can’t imagine a world without MIT.”