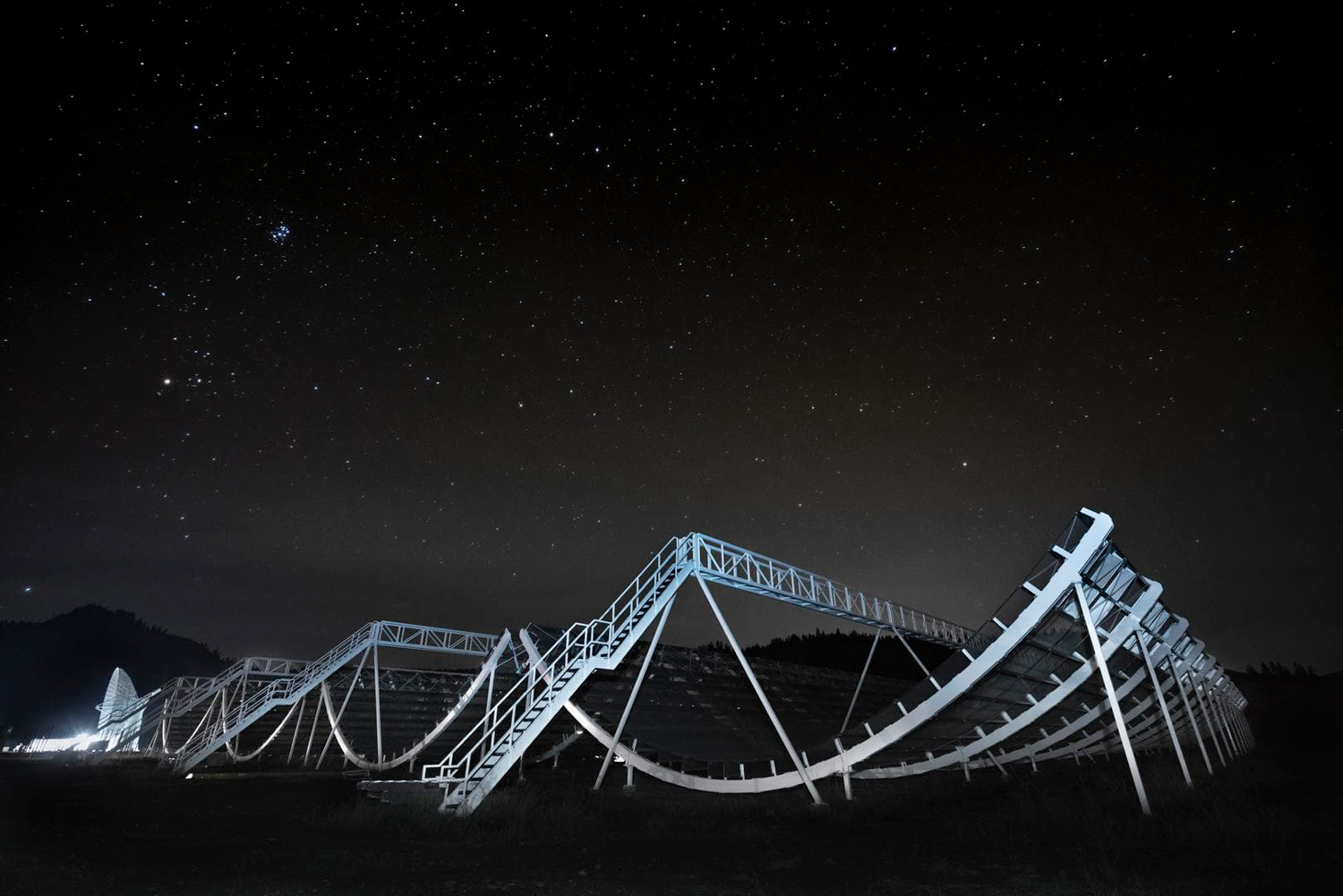 To catch sight of a fast radio burst is to be extremely lucky in where and when you point your radio dish. Fast radio bursts, or FRBs, are oddly bright flashes of light, registering in the radio band of the electromagnetic spectrum, that blaze for a few milliseconds before vanishing without a trace.

These brief and mysterious beacons have been spotted in various and distant parts of the universe, as well as in our own galaxy. Their origins are unknown, and their appearance is unpredictable. Since the first was discovered in 2007, radio astronomers have only caught sight of around 140 bursts in their scopes.

Now, a large stationary radio telescope in British Columbia has nearly quadrupled the number of fast radio bursts discovered to date. The telescope, known as CHIME, for the Canadian Hydrogen Intensity Mapping Experiment, has detected 535 new fast radio bursts during its first year of operation, between 2018 and 2019.

Scientists with the CHIME Collaboration, including researchers at MIT, have assembled the new signals in the telescope’s first FRB catalog, which they will present this week at the American Astronomical Society Meeting.

The new catalog significantly expands the current library of known FRBs, and is already yielding clues as to their properties. For instance, the newly discovered bursts appear to fall in two distinct classes: those that repeat, and those that don’t. Scientists identified 18 FRB sources that burst repeatedly, while the rest appear to be one-offs. The repeaters also look different, with each burst lasting slightly longer and emitting more focused radio frequencies than bursts from single, nonrepeating FRBs.

These observations strongly suggest that repeaters and one-offs arise from separate mechanisms and astrophysical sources. With more observations, astronomers hope soon to pin down the extreme origins of these curiously bright signals.

“Before CHIME, there were less than 100 total discovered FRBs; now, after one year of observation, we’ve discovered hundreds more,” says CHIME member Kaitlyn Shin, a graduate student in MIT’s Department of Physics. “With all these sources, we can really start getting a picture of what FRBs look like as a whole, what astrophysics might be driving these events, and how they can be used to study the universe going forward.”

CHIME comprises four massive cylindrical radio antennas, roughly the size and shape of snowboarding half-pipes, located at the Dominion Radio Astrophysical Observatory, operated by the National Research Council of Canada in British Columbia, Canada. CHIME is a stationary array, with no moving parts. The telescope receives radio signals each day from half of the sky as the Earth rotates.

While most radio astronomy is done by swiveling a large dish to focus light from different parts of the sky, CHIME stares, motionless, at the sky, and focuses incoming signals using a correlator—a powerful digital signaling processor that can work through huge amounts of data, at a rate of about 7 terabits per second, equivalent to a few percent of the world’s internet traffic.

“Digital signal processing is what makes CHIME able to reconstruct and ‘look’ in thousands of directions simultaneously,” says Kiyoshi Masui, assistant professor of physics at MIT, who will lead the group’s conference presentation. “That’s what helps us detect FRBs a thousand times more often than a traditional telescope.”

Over the first year of operation, CHIME detected 535 new fast radio bursts. When the scientists mapped their locations, they found the bursts were evenly distributed in space, seeming to arise from any and all parts of the sky. From the FRBs that CHIME was able to detect, the scientists calculated that bright fast radio bursts occur at a rate of about 800 per day across the entire sky—the most precise estimate of FRBs overall rate to date.

“That’s kind of the beautiful thing about this field—FRBs are really hard to see, but they’re not uncommon,” says Masui, who is a member of MIT’s Kavli Institute for Astrophysics and Space Research. “If your eyes could see radio flashes the way you can see camera flashes, you would see them all the time if you just looked up.”

As radio waves travel across space, any interstellar gas, or plasma, along the way can distort or disperse the wave’s properties and trajectory. The degree to which a radio wave is dispersed can give clues to how much gas it passed through, and possibly how much distance it has traveled from its source.

For each of the 535 FRBs that CHIME detected, Masui and his colleagues measured its dispersion, and found that most bursts likely originated from far-off sources within distant galaxies. The fact that the bursts were bright enough to be detected by CHIME suggests that they must have been produced by extremely energetic sources. As the telescope detects more FRBs, scientists hope to pin down exactly what kind of exotic phenomena could generate such ultrabright, ultrafast signals.

Scientists also plan to use the bursts, and their dispersion estimates, to map the distribution of gas throughout the universe.

“Each FRB gives us some information of how far they’ve propagated and how much gas they’ve propagated through,” Shin says. “With large numbers of FRBs, we can hopefully figure out how gas and matter are distributed on very large scales in the universe. So, alongside the mystery of what FRBs are themselves, there’s also the exciting potential for FRBs as powerful cosmological probes in the future.”

This article was written by Jennifer Chu and originally appeared on MIT News on June 9, 2021. Image courtesy of CHIME.

Basic Research School of Science
Give to MIT