On Monday, MIT announced five multiyear flagship projects in the first-ever Climate Grand Challenges, a new initiative to tackle complex climate problems and deliver breakthrough solutions to the world as quickly as possible. This article is the first in a five-part series highlighting the most promising concepts to emerge from the competition, and the interdisciplinary research teams behind them.

With improvements to computer processing power and an increased understanding of the physical equations governing the Earth’s climate, scientists are continually working to refine climate models and improve their predictive power. But the tools they’re refining were originally conceived decades ago with only scientists in mind. When it comes to developing tangible climate action plans, these models remain inscrutable to the policymakers, public safety officials, civil engineers, and community organizers who need their predictive insight most. 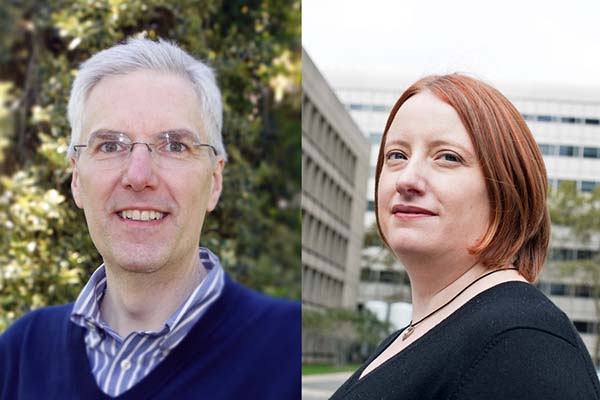 The two leads on the Climate Grand Challenge flagship project “Bringing Computation to the Climate Challenge" are Raffaele Ferrari (left) and Noelle Selin.

“What you end up having is a gap between what’s typically used in practice, and the real cutting-edge science,” says Noelle Selin, a professor in the Institute for Data, Systems and Society and the Department of Earth, Atmospheric and Planetary Sciences (EAPS), and co-lead with Professor Raffaele Ferrari on the MIT Climate Grand Challenges flagship project “Bringing Computation to the Climate Challenge.” “How can we use new computational techniques, new understandings, new ways of thinking about modeling, to really bridge that gap between state-of-the-art scientific advances and modeling, and people who are actually needing to use these models?”

Using this as a driving question, the team won’t just be trying to refine current climate models, they’re building a new one from the ground up.

This kind of game-changing advancement is exactly what the MIT Climate Grand Challenges is looking for, which is why the proposal has been named one of the five flagship projects in the ambitious Institute-wide program aimed at tackling the climate crisis. The proposal, which was selected from 100 submissions and was among 27 finalists, will receive additional funding and support to further their goal of reimagining the climate modeling system. It also brings together contributors from across the Institute, including the MIT Schwarzman College of Computing, the School of Engineering, and the Sloan School of Management.

When it comes to pursuing high-impact climate solutions that communities around the world can use, “it’s great to do it at MIT,” says Ferrari, EAPS Cecil and Ida Green Professor of Oceanography. “You’re not going to find many places in the world where you have the cutting-edge climate science, the cutting-edge computer science, and the cutting-edge policy science experts that we need to work together.”

The climate model of the future

The proposal builds on work that Ferrari began three years ago as part of a joint project with Caltech, the Naval Postgraduate School, and NASA’s Jet Propulsion Lab. Called the Climate Modeling Alliance (CliMA), the consortium of scientists, engineers, and applied mathematicians is constructing a climate model capable of more accurately projecting future changes in critical variables, such as clouds in the atmosphere and turbulence in the ocean, with uncertainties at least half the size of those in existing models.

To do this, however, requires a new approach. For one thing, current models are too coarse in resolution — at the 100-to-200-kilometer scale — to resolve small-scale processes like cloud cover, rainfall, and sea ice extent. But also, explains Ferrari, part of this limitation in resolution is due to the fundamental architecture of the models themselves. The languages most global climate models are coded in were first created back in the 1960s and ’70s, largely by scientists for scientists. Since then, advances in computing driven by the corporate world and computer gaming have given rise to dynamic new computer languages, powerful graphics processing units, and machine learning.

For climate models to take full advantage of these advancements, there’s only one option: starting over with a modern, more flexible language. Written in Julia, a part of Julialab’s Scientific Machine Learning technology, and spearheaded by Alan Edelman, a professor of applied mathematics in MIT’s Department of Mathematics, CliMA will be able to harness far more data than the current models can handle.

“It’s been real fun finally working with people in computer science here at MIT,” Ferrari says. “Before it was impossible, because traditional climate models are in a language their students can’t even read.”

The result is what’s being called the “Earth digital twin,” a climate model that can simulate global conditions on a large scale. This on its own is an impressive feat, but the team wants to take this a step further with their proposal.

“We want to take this large-scale model and create what we call an ‘emulator’ that is only predicting a set of variables of interest, but it’s been trained on the large-scale model,” Ferrari explains. Emulators are not new technology, but what is new is that these emulators, being referred to as the “Earth digital cousins,” will take advantage of machine learning.

“Now we know how to train a model if we have enough data to train them on,” says Ferrari. Machine learning for projects like this has only become possible in recent years as more observational data become available, along with improved computer processing power. The goal is to create smaller, more localized models by training them using the Earth digital twin. Doing so will save time and money, which is key if the digital cousins are going to be usable for stakeholders, like local governments and private-sector developers.

When it comes to setting climate-informed policy, stakeholders need to understand the probability of an outcome within their own regions — in the same way that you would prepare for a hike differently if there’s a 10 percent chance of rain versus a 90 percent chance. The smaller Earth digital cousin models will be able to do things the larger model can’t do, like simulate local regions in real time and provide a wider range of probabilistic scenarios.

“Right now, if you wanted to use output from a global climate model, you usually would have to use output that’s designed for general use,” says Selin, who is also the director of the MIT Technology and Policy Program. With the project, the team can take end-user needs into account from the very beginning while also incorporating their feedback and suggestions into the models, helping to “democratize the idea of running these climate models,” as she puts it. Doing so means building an interactive interface that eventually will give users the ability to change input values and run the new simulations in real time. The team hopes that, eventually, the Earth digital cousins could run on something as ubiquitous as a smartphone, although developments like that are currently beyond the scope of the project.

The next thing the team will work on is building connections with stakeholders. Through participation of other MIT groups, such as the Joint Program on the Science and Policy of Global Change and the Climate and Sustainability Consortium, they hope to work closely with policymakers, public safety officials, and urban planners to give them predictive tools tailored to their needs that can provide actionable outputs important for planning. Faced with rising sea levels, for example, coastal cities could better visualize the threat and make informed decisions about infrastructure development and disaster preparedness; communities in drought-prone regions could develop long-term civil planning with an emphasis on water conservation and wildfire resistance.

“We want to make the modeling and analysis process faster so people can get more direct and useful feedback for near-term decisions,” she says.

The final piece of the challenge is to incentivize students now so that they can join the project and make a difference. Ferrari has already had luck garnering student interest after co-teaching a class with Edelman and seeing the enthusiasm students have about computer science and climate solutions.

“We’re intending in this project to build a climate model of the future,” says Selin. “So it seems really appropriate that we would also train the builders of that climate model.”

This story was originally written by Paige Colley and published in MIT News on April 13, 2022.