Did Our Early Ancestors Boil Their Food in Hot Springs?

Some of the oldest remains of early human ancestors have been unearthed in Olduvai Gorge, a rift valley setting in northern Tanzania where anthropologists have discovered fossils of hominids that existed 1.8 million years ago. The region has preserved many fossils and stone tools, indicating that early humans settled and hunted there.

Now a team led by researchers at MIT and the University of Alcalá in Spain has discovered evidence that hot springs may have existed in Olduvai Gorge around that time, near early human archaeological sites. The proximity of these hydrothermal features raises the possibility that early humans could have used hot springs as a cooking resource, for instance to boil fresh kills, long before humans are thought to have used fire as a controlled source for cooking.

“As far as we can tell, this is the first time researchers have put forth concrete evidence for the possibility that people were using hydrothermal environments as a resource, where animals would’ve been gathering, and where the potential to cook was available,” says Roger Summons, the Schlumberger Professor of Geobiology in MIT’s Department of Earth, Atmospheric and Planetary Sciences (EAPS).

In 2016, Sistiaga joined an archaeological expedition to Olduvai Gorge, where researchers with the Olduvai Paleoanthropology and Paleoecology Project were collecting sediments from a 3-kilometer-long layer of exposed rock that was deposited around 1.7 million years ago. This geologic layer was striking because its sandy composition was markedly different from the dark clay layer just below, which was deposited 1.8 million years ago.

“Something was changing in the environment, so we wanted to understand what happened and how that impacted humans,” says Sistiaga, who had originally planned to analyze the sediments to see how the landscape changed in response to climate and how these changes may have affected the way early humans lived in the region. 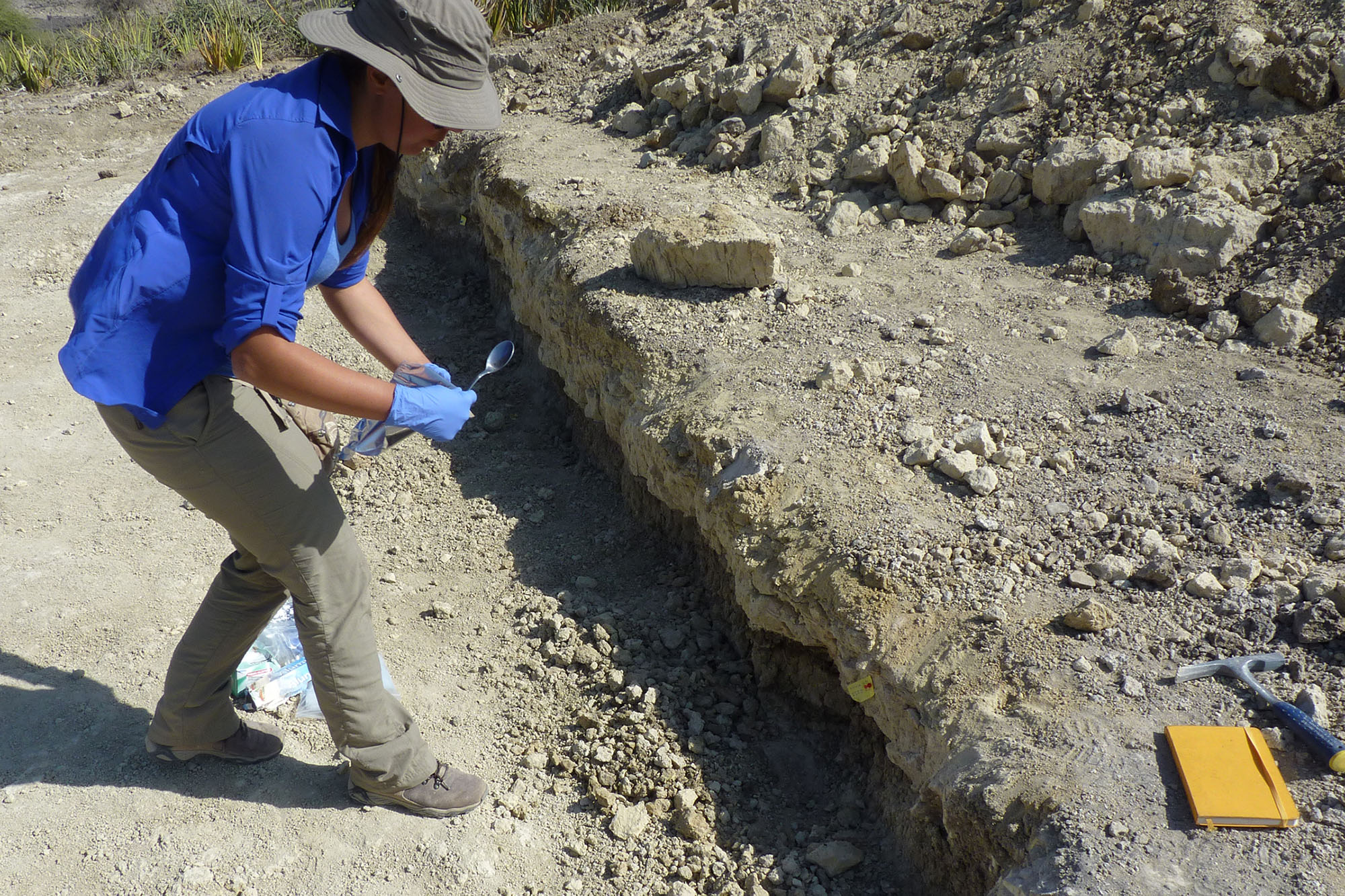 It’s thought that around 1.7 million years ago, East Africa underwent a gradual aridification, moving from a wetter, tree-populated climate to dryer, grassier terrain. Sistiaga brought back sandy rocks collected from the Olduvai Gorge layer and began to analyze them in Summons’s lab for signs of certain lipids that can contain residue of leaf waxes, offering clues to the kind of vegetation present at the time.

“You can reconstruct something about the plants that were there by the carbon numbers and the isotopes, and that’s what our lab specializes in, and why Ainara was doing it in our lab,” Summons says. “But then she discovered other classes of compounds that were totally unexpected.”

Within the sediments she brought back, Sistiaga came across lipids that looked completely different from the plant-derived lipids she knew. She took the data to Summons, who realized that they were a close match with lipids produced not by plants, but by specific groups of bacteria that he and his colleagues had reported on, in a completely different context, nearly 20 years ago.

The lipids that Sistiaga extracted from sediments deposited 1.7 million years ago in Tanzania were the same lipids that are produced by a modern bacteria that Summons and his colleagues previously studied in the United States, in the hot springs of Yellowstone National Park.

One specific bacterium, Thermocrinis ruber, is a hyperthermophilic organism that will only thrive in very hot waters, such as those found in the outflow channels of boiling hot springs.

“They won’t even grow unless the temperature is above 80 degrees Celsius [176 degrees Fahrenheit],” Summons says. “Some of the samples Ainara brought back from this sandy layer in Olduvai Gorge had these same assemblages of bacterial lipids that we think are unambiguously indicative of high-temperature water.”

That is, it appears that heat-loving bacteria similar to those Summons had worked on more than 20 years ago in Yellowstone may also have lived in Olduvai Gorge 1.7 million years ago. By extension, the team proposes, high-temperature features such as hot springs and hydrothermal waters could also have been present.

“It’s not a crazy idea that, with all this tectonic activity in the middle of the rift system, there could have been extrusion of hydrothermal fluids,” notes Sistiaga, who says that Olduvai Gorge is a geologically active tectonic region that has upheaved volcanoes over millions of years—activity that could also have boiled up groundwater to form hot springs at the surface.

The region where the team collected the sediments is adjacent to sites of early human habitation featuring stone tools, along with animal bones. It is possible, then, that nearby hot springs may have enabled hominins to cook food such as meat and certain tough tubers and roots.

“The authors’ comprehensive analyses paint a vivid picture of the ancient Olduvai Gorge ecosystem and landscape, including the first compelling evidence for ancient hydrothermal springs,” says Richard Pancost, a professor of biogeochemistry at the University of Bristol, who was not involved in the study. “This introduces the fascinating possibility that such springs could have been used by early hominins to cook food.”

“If there was a wildebeest that fell into the water and was cooked, why wouldn’t you eat it?” Sistiaga poses.

While there is currently no sure-fire way to establish whether early humans indeed used hot springs to cook, the team plans to look for similar lipids, and signs of hydrothermal reservoirs, in other layers and locations throughout Olduvai Gorge, as well as near other sites in the world where human settlements have been found.

“We can prove in other sites that maybe hot springs were present, but we would still lack evidence of how humans interacted with them. That’s a question of behavior, and understanding the behavior of extinct species almost 2 million years ago is very difficult,” Sistiaga says. “I hope we can find other evidence that supports at least the presence of this resource in other important sites for human evolution.”

This research was supported, in part, by the European Commission (MSCA-GF), the NASA Astrobiology Institute, and the Government of Spain.

This article was written by Jennifer Chu and originally appeared on MIT News on September 15, 2020 (photo: Tom Björklund).