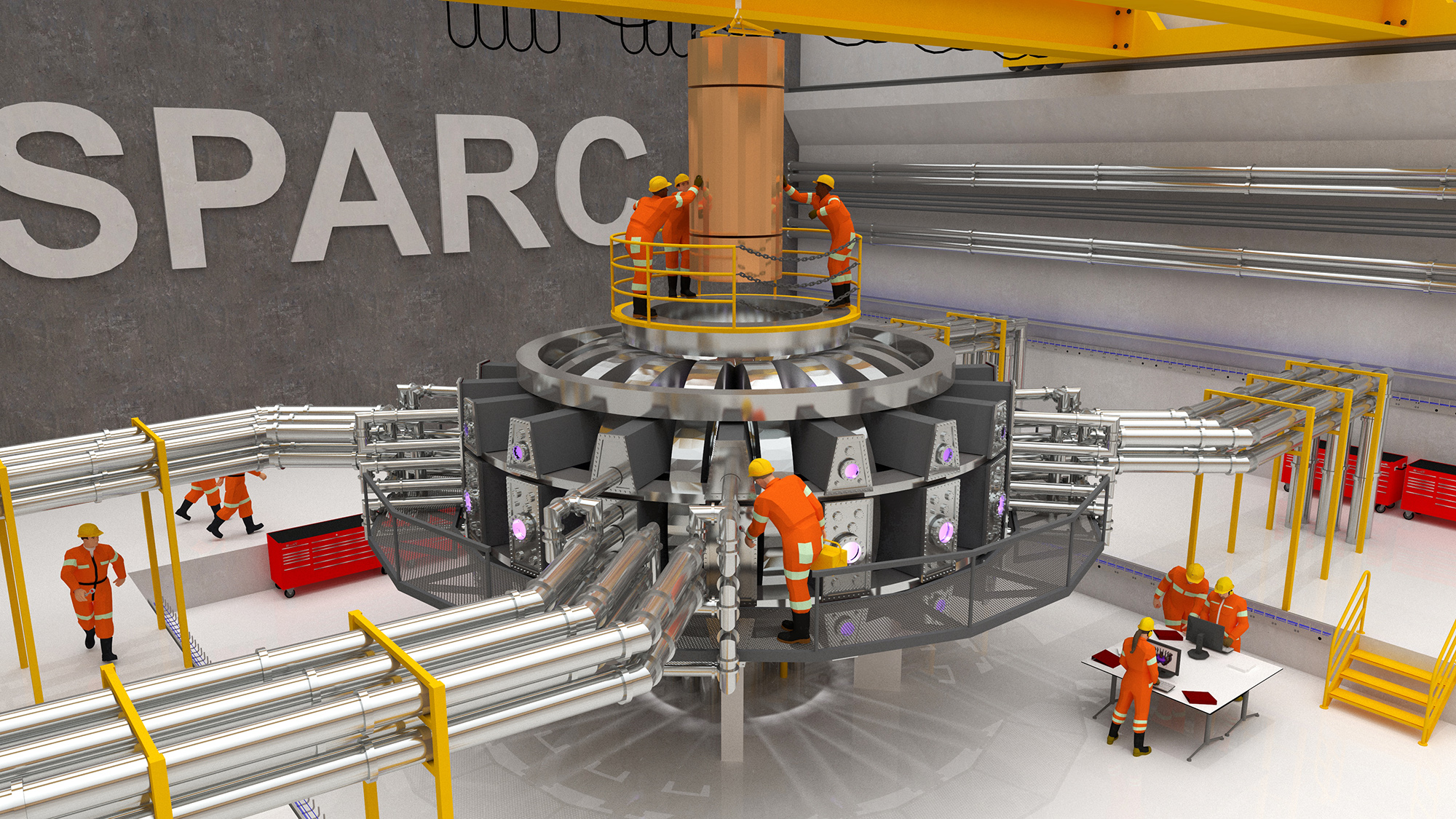 MIT is taking fusion energy from distant idea to bold action with SPARC, which aims to be the first fusion device to produce more energy than it consumes—on a timescale that is relevant to climate change. This long-awaited goal will be a historic moment for mankind and is on the fast track toward realization, thanks to a collaboration between MIT and a new private company created by former MIT researchers and students, Commonwealth Fusion Systems (CFS).

Fusion is the process that powers the sun and stars. It involves abundant light elements smashing together to form heavier elements and releasing prodigious amounts of carbon-free energy in the process. MIT’s pathway to fusion energy couples proven physics with the drive of an innovative university-industry collaboration to unlock fusion’s potential. The ultimate goal is to rapidly commercialize fusion energy and establish a new industry. CFS, headed by Robert Mumgaard SM ’15, PhD ’15, will sponsor research at MIT and collaborate with the team at MIT’s Plasma Science and Fusion Center (PSFC) led by Zach Hartwig PhD ’14, John C. Hardwick Assistant Professor of Nuclear Science and Engineering, on the research program leading to SPARC.

The goal of SPARC is to demonstrate net energy in 7 years. This will be the key technical milestone needed to propel fusion from the research center to the power grid. SPARC’s success could lead to the construction of a power plant scaled up to roughly twice SPARC’s diameter capable of producing commercially viable net power output—making fusion a major contributor of carbon-free energy.

SPARC’s success could lead to the construction of a power plant capable of producing commercially viable net power output.

The first step to building SPARC is to refine the magnet technology that will be central to its operation. The fusion process produces net energy only at extreme temperatures of tens of millions of degrees Celsius, too hot for any solid material to withstand. To get around that, fusion researchers use magnetic fields to hold in place the hot plasma—a kind of gaseous soup of subatomic particles—keeping it from coming into contact with any part of the device’s chamber. A technology breakthrough plays a critical enabling role: a class of materials known as high-temperature superconductors (HTS) have recently become commercially available with sufficient performance and quantity for fusion applications. These materials will enable MIT and CFS to substantially increase the performance of superconducting fusion magnets, the principal initial focus of the research collaboration. These magnets will lead to dramatically smaller, lower-cost fusion devices, like SPARC, that can produce net energy of up to several hundred megawatts of power. Successful development of this new generation of fusion magnets is set to be complete in 2021 and will directly lead to the design and operation of SPARC.

“The path to fusion energy has never been as clear as it is right now, and SPARC is the vital first step,” says Dennis Whyte, director of PSFC and the Hitachi America Professor of Engineering. “I am confident that by engaging our MIT students, who are so adept at innovation, we will change the course of humanity by making abundant clean energy available to everyone.”

Energy Health of the Planet Innovation and Entrepreneurship School of Engineering