A Campus for the Next 100 Years 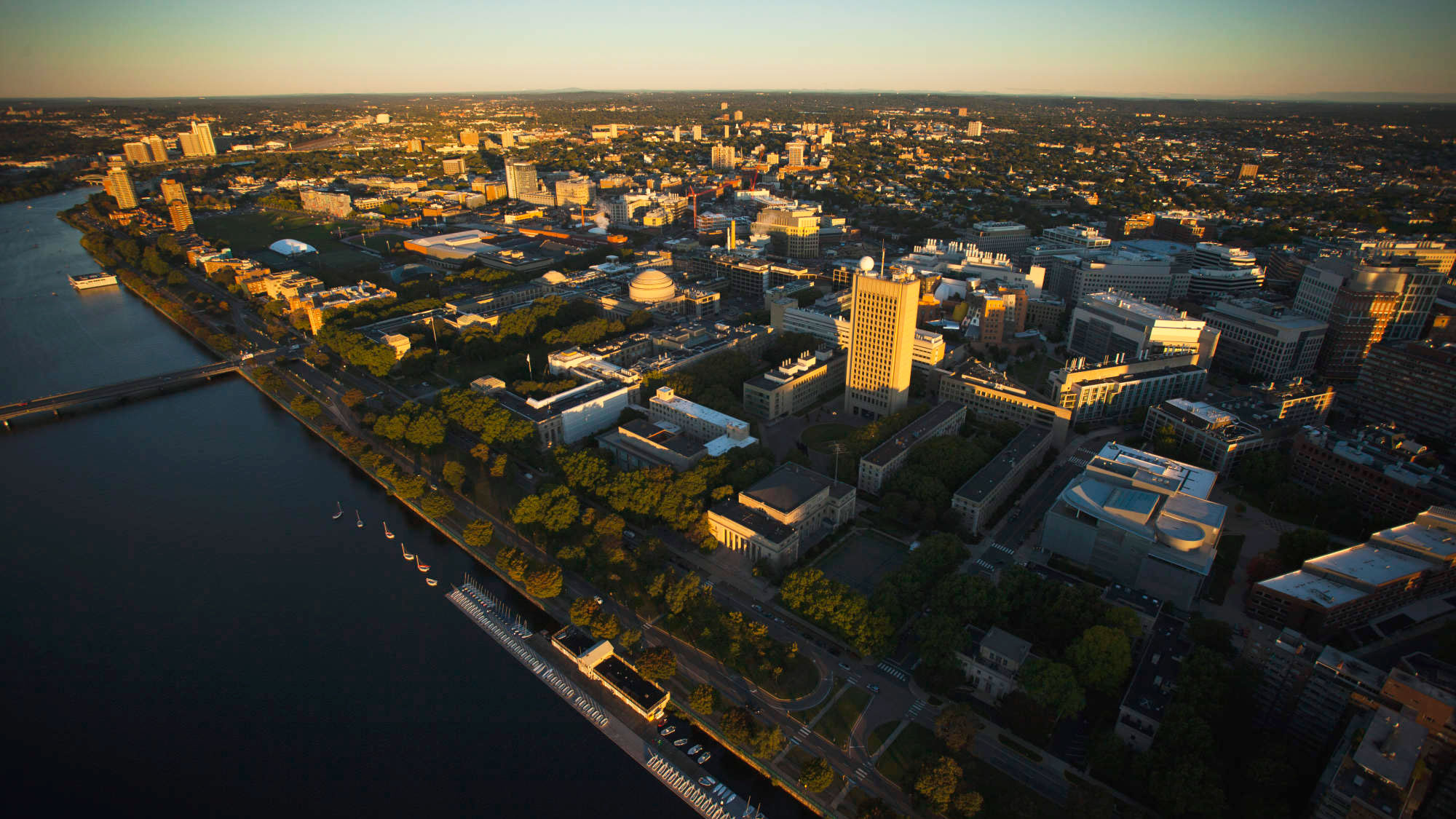 When MIT moved to East Cambridge from Boston’s Back Bay in 1916, the area was still an active seaport, with a busy network of canals linking manufacturers with merchants.

Today, those canals are long buried, and MIT and its newly invigorated and connected campus are the epicenter of a far more dynamic network with a far broader reach.

“MIT is at the heart of 21st-century revolutions in technology, research, and innovation,” says Martin A. Schmidt  SM ’83, PhD ’88, MIT provost and the Ray and Maria Stata Professor of Electrical Engineering and Computer Science. “Cambridge is delivering transformation to the world.”

With support from alumni and friends in the Campaign for a Better World, MIT’s physical campus has undergone a major evolution, from the nanoscale to the grandest scale. “Today, the campus is more equipped than ever to help MIT’s students, faculty, and staff rise to humanity’s ongoing challenges,” says Joe Higgins, vice president for campus services and stewardship at MIT.

“MIT asked itself what new expertise it would need to continue to lead,” says Higgins. “How can we renew and maintain our infrastructure to the highest standard? How can we establish key strategic partnerships? How can we support our community? These are the questions that drove our efforts.”

Over the life of the Campaign, the campus has added a dedicated facility to foster groundbreaking collaborative work in nanotechnology. New student housing has been built and old residence halls reconfigured to enrich contemporary student life. Existing structures have been refitted to drive cutting-edge research and libraries revamped for the digital age. A portal between academia and industry—and a new gateway to MIT—has been established in Kendall Square. Long-postponed maintenance has been performed to usher historic buildings into the modern age. New and renovated homes for music, design, computing, and earth and environmental sciences have started to take shape.

14 buildings were LEED certified during the Campaign.

Since 2011, the MIT campus has welcomed six new buildings. It has seen 10 major renovations including historic restorations of Kresge Auditorium, the MIT Chapel, and the iconic Great Dome. With the new Vassar Street Residence Hall (Building W46) and the recently completed graduate residence and childcare center (Building E37) in Kendall Square, the campus has added 912 student beds. The MIT campus is also greener than ever, with new and expanded open spaces, dramatically reduced energy use and emissions, and 14 LEED-certified buildings during the Campaign.

The Innovative Face of MIT

Kendall Square is home to hundreds of biotech, pharmaceutical, and technology companies, many of them started and staffed by MIT alumni, faculty, and students. The Kendall Square Initiative, a major reimagining of the area, consolidates MIT’s synergy with the surrounding scientific and business ecosystems. The project has introduced a number of MIT buildings to the landscape, including a 29-story graduate residence, a modernized admissions office, a new welcome center, a hub for innovation and entrepreneurship—MIT InnovationHQ—and a new home for the MIT Museum.

Setting the Arts on Center Stage

Music and Theater Arts is one of the top-five highest enrolled courses for undergraduates at MIT, and music is among the most popular of the Institute’s 42 minors. Reflecting the core place that the arts hold in the lives and well-being of MIT’s students, the Institute in 2017 opened its first dedicated performing arts building (Building W97) in a renovated former warehouse on Vassar Street. The building, which features a distinctive two-story, 180-seat performance space that extends above the existing roof line, has consolidated the thriving Theater Arts program into a single space.

Meanwhile, to best serve the more than 1,500 students who enroll in music courses each year, a brand-new state-of-the-art music building in the heart of West Campus is in the works. Slated for completion by 2024, the 33,000-square-foot facility will expand and enhance music education at MIT and be a unified home for MIT’s dynamic musical community, from conservatory-level musicians to those discovering the power of the arts. 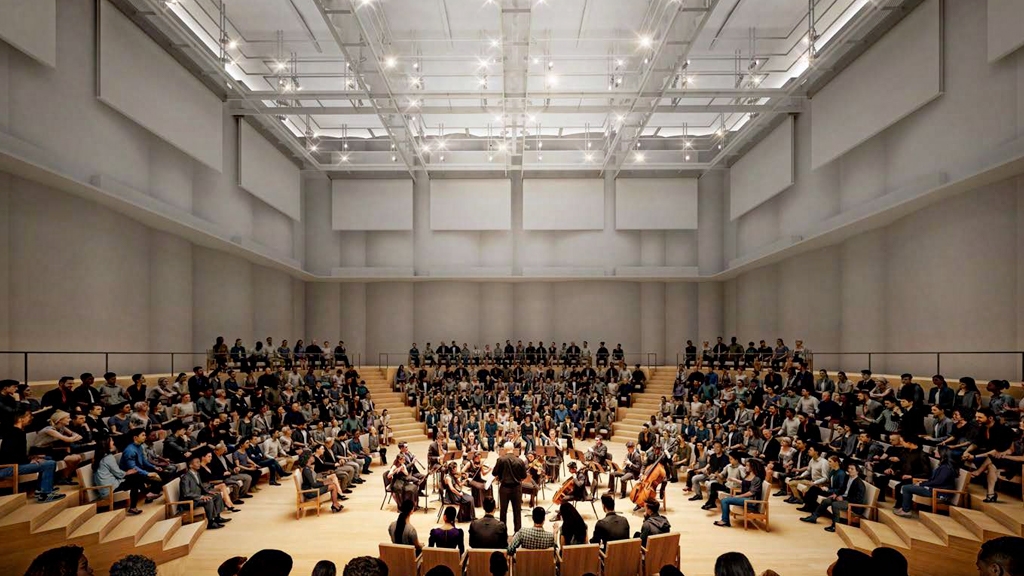 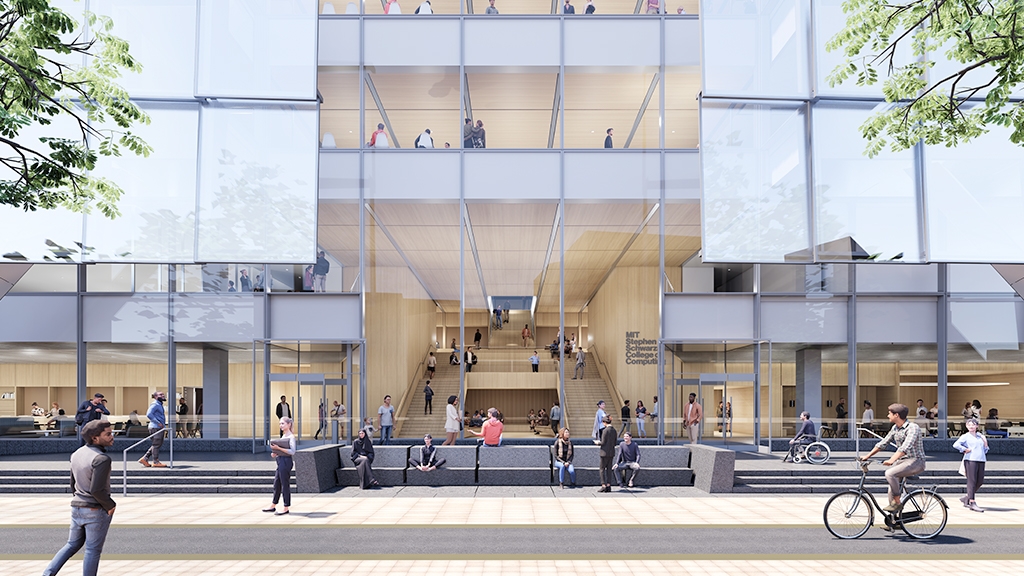 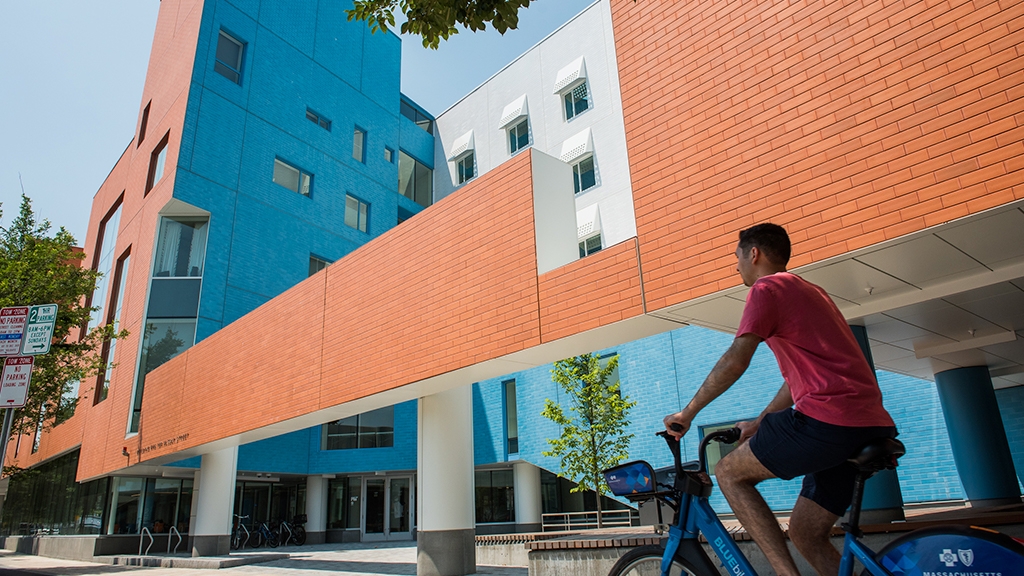 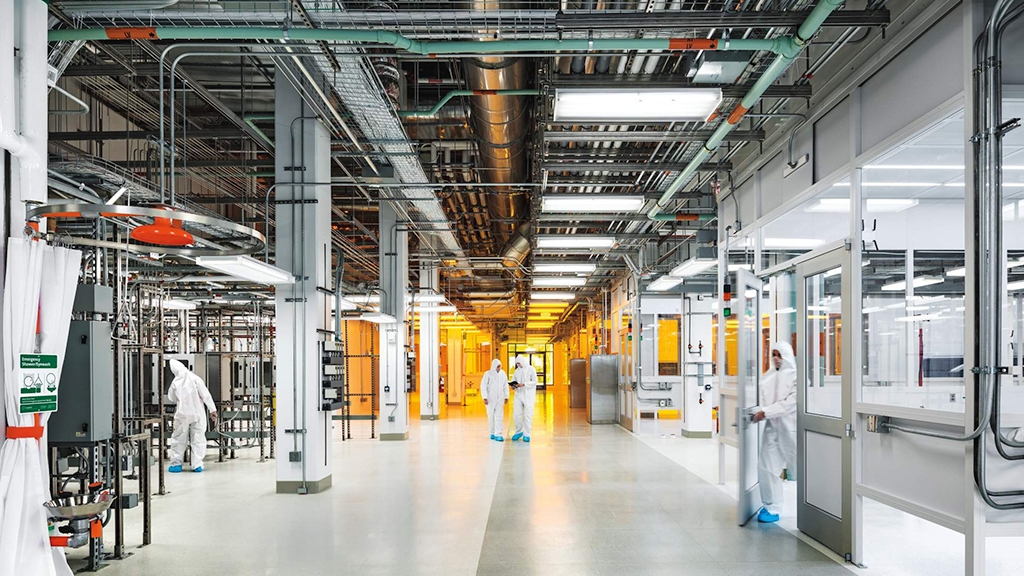 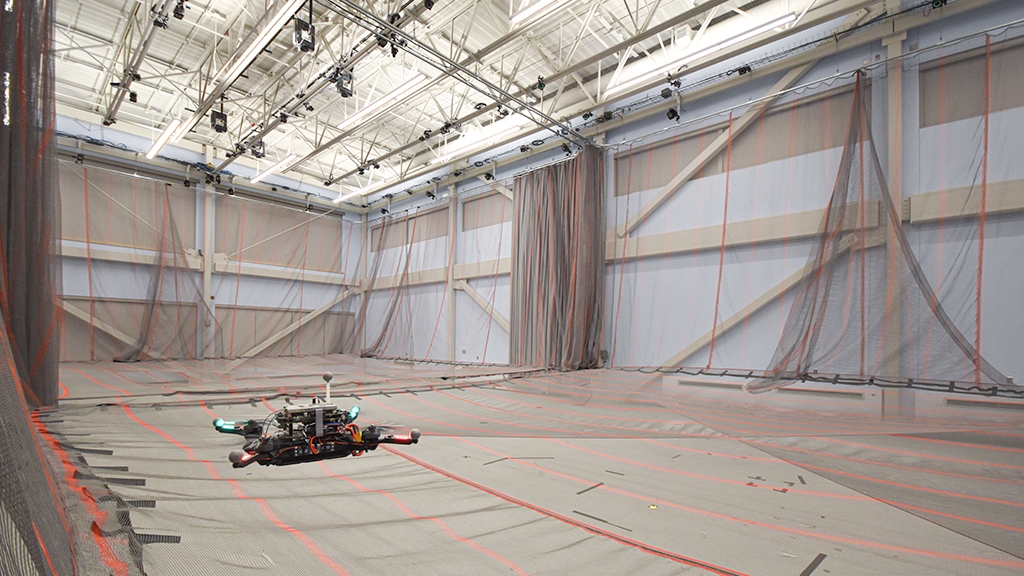 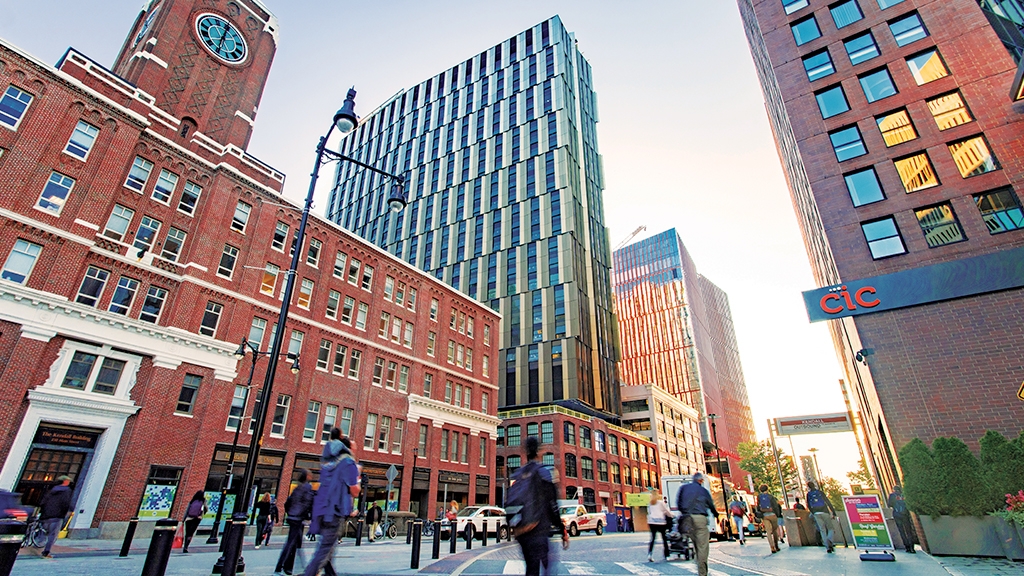 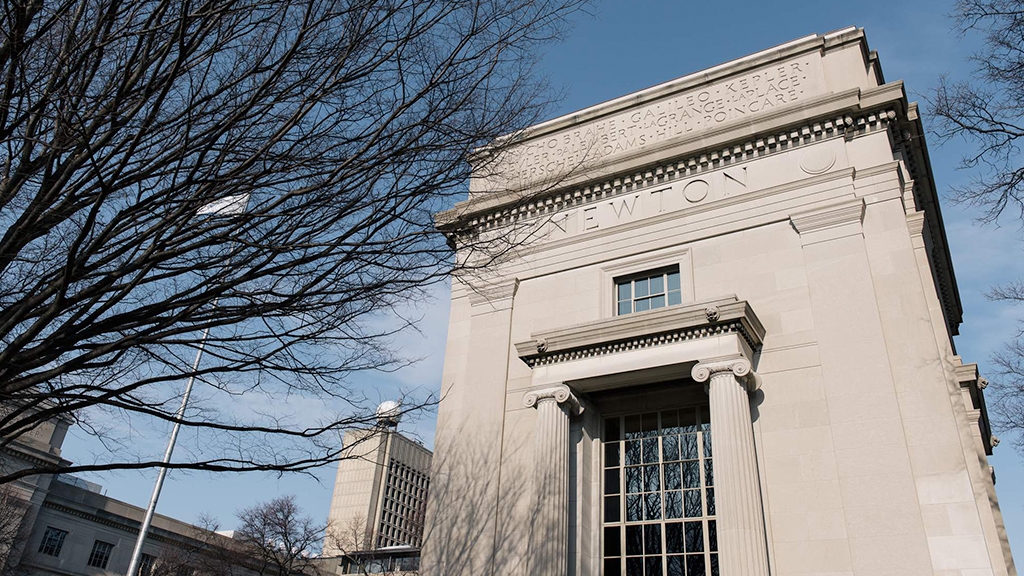 To best serve the more than 1,500 students who enroll in music courses each year, a state-of-the-art music building is in the works.
The MIT Stephen A. Schwarzman College of Computing is slated to move into its new Vassar Street home in 2023.
The Vassar Street residence, completed in 2021, houses 450 undergraduates and 12 graduate resident assistants.
Completed in 2018, MIT.Nano contains 47,000 square feet of clean-room suites.
The Metropolitan Storage Warehouse is being reconfigured as a hub for design research and education and a new home for the MIT School of Architecture and Planning.
Building 31 is refitted for research in fields that include autonomous vehicles, turbomachines, and energy storage.
The Kendall Square Initiative, a major reimagining of the area, consolidates MIT’s synergy with the surrounding scientific and business ecosystems.
In 2012, the School of Science welcomed the renovation of The Simons Building, home to the Department of Mathematics.

MIT.nano supports faculty and researchers from areas of scholarship across MIT who work with materials, devices, and organisms at the nanoscale—one billionth of a meter. Completed in 2018 and situated steps from the Infinite Corridor, the 238,000-square-foot building contains 47,000 square feet of clean-room suites, state-of-the-art electron microscope systems, a cutting-edge reactive-ion etching system, and a two-story virtual reality and visualization space. The building was recently awarded the American Institute of Architects 2021 Committee on the Environment Top Ten Award for excellence in sustainability and design.

The similarly cross-disciplinary MIT Stephen A. Schwarzman College of Computing, launched in 2018 to anticipate and modify the impact of computing and artificial intelligence on society, is slated to move into its new Vassar Street home in 2023. By design, the building will increase opportunities for collaboration, with offices and research labs for new and existing faculty and visiting scholars. A 250-seat lecture hall, a 60-seat classroom, and tutoring suites will host students and visitors from across the Institute. The building will also include MIT’s newest event space, eight stories high, drawing guests from the campus community and beyond.

In 2013, the newly created Institute for Medical Engineering and Science (IMES) reconfigured and modernized labs, offices, and collaborative spaces in Building E25. Included in the renovation was the creation of the IMES Innovation Space, a flexible open area that promotes community and learning.

Home to the Department of Earth, Atmospheric and Planetary Sciences, the 56-year-old Cecil and Ida Green Building (Building 54), a campus landmark, is undergoing a significant remake that will include a new Earth and Environment Pavilion, designed to be a vital center for environmental and climate research. In 2012, the School of Science welcomed the renovation of the Simons Building, home to the Department of Mathematics. The restoration project upgraded vital infrastructure and mechanical systems and added a floor while preserving the esthetics and integrity of the 100+-year-old Beaux Arts building.

Designed in 1929 for research in internal combustion, Building 31 is now refitted for research in fields that include autonomous vehicles, turbomachines, and energy storage. Home to the departments of aeronautics and astronautics and mechanical engineering and reopened in 2017, the facility features the Kresa Center for Autonomous Systems—an indoor space with 25-foot ceilings designed for work with all types of autonomous vehicles.

Nearby, students and faculty are enjoying extensive renovations to Building 17, as well as the construction of a new Wright Brothers Wind Tunnel. The original tunnel, dedicated in 1938, played a role in the design of military aircraft during World War II. More recently, it was used for testing everything from subway station entrances to solar cars. The new facility is the largest and most advanced academic wind tunnel in the United States.

From Warehouse to Design Hub

Ushering in a new era for design, architecture, urban planning, and entrepreneurship at MIT, the iconic Metropolitan Storage Warehouse (Building W41) at the heart of campus is being artfully reconfigured as a modern hub for interdisciplinary design research and education and a new home for the MIT School of Architecture and Planning. The building, which will also feature the largest makerspace on campus—an approximately 17,000-square-foot facility overseen by MIT’s makerspace initiative, Project Manus—will house new academic, research, and gathering spaces. A large glass façade on the structure’s north side will create a new interface between the building, the campus, and the city of Cambridge as the nation’s oldest architecture program is at last consolidated under one roof.

Homes Away from Home

The majority of MIT undergraduates live in residence halls, and 40% remain in the same community for the duration of their four years on campus The Vassar Street residence, built on the West Garage Parking facility site and completed in 2021, houses 450 undergraduates and 12 graduate resident assistants. There are large shared community spaces, a country-style kitchen where students can cook for themselves, and a dining hall open to the MIT community. Sustainable features including a high-performance building envelope and an underground stormwater management system earned the building LEED Platinum status.

“To help our students reach their full potential and solve humanity’s grand challenges, we must approach student life and learning holistically. That includes providing students with living spaces and programs that promote wellbeing and enable the development of strong, supportive communities.”

In 2013, MIT dedicated the David H. Koch Childcare Center, a 14,000-square-foot child care facility that nearly doubled the number of children who could be accommodated on campus.

The Morris and Sophie Chang Building (Building E52) serves as headquarters for the Department of Economics and as the administrative center for the MIT Sloan School of Management. The Art Deco landmark has been reconfigured inside and out—with fresh academic spaces and interior bridges that connect it with surrounding buildings. The highlight of the project is the Samberg Conference Center, a 20,000 square-foot, glass-encased addition on the sixth and seventh floors that offers stunning views of the Charles River and Boston.

Spaces for Mind and Hand

When William Welles Bosworth (Class of 1889) designed a new bold campus for MIT more than 100 years ago, he laid the foundation for MIT’s success in interdisciplinary problem solving. Through a century of incomparable scientific and technological revolutions, Bosworth’s primary idea—that innovation grows when the barriers to collaboration are lowered—has endured and flourished. By reinvesting in and reinvigorating the connected campus Bosworth had in mind, MIT is positioned to “empower the next century of achievement,” says Provost Schmidt. “Innovation is a contact sport that demands the continual interplay of people and ideas. This interplay is the hallmark of MIT.”

To interact with this map and explore capital projects on the MIT campus, use a laptop computer. The map is not interactive on mobile devices.