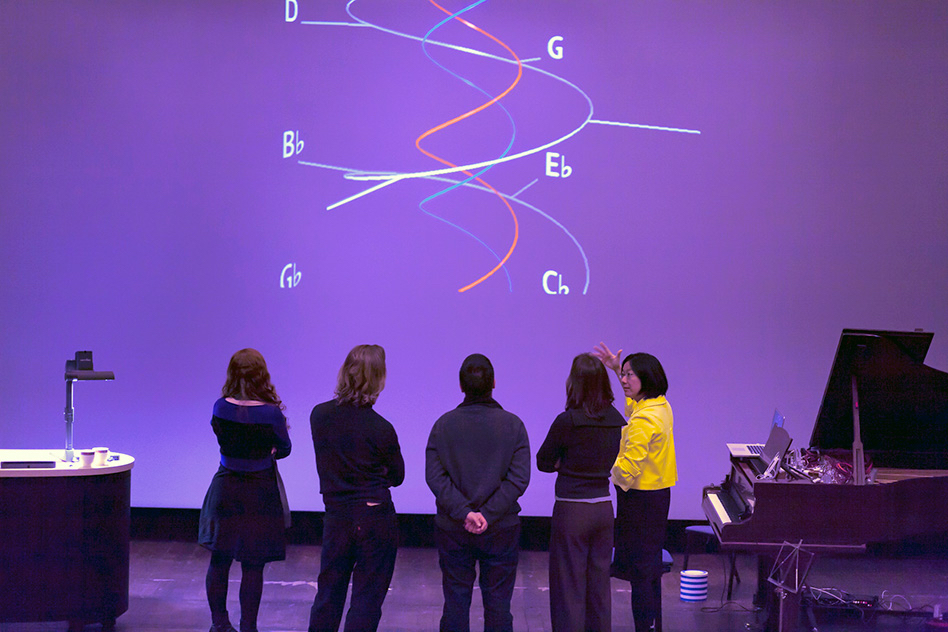 This article was originally published on MIT News on January 12, 2017.

“Here in London, you can feel like you’re part of history and that you’re on the cutting edge at same time—it’s a great fusion,” says Noam Angrist ’13, a Rhodes Scholar who shuttles between the UK and Botswana on behalf of a development nonprofit he launched in 2014. Of London and the city’s immediate environs he says, “It’s where the old and new clash beautifully.”

For MIT graduates like Angrist, whose professional lives span disciplines and continents, greater London proves to be an ideal place to set up shop. Alumni find the city a welcoming place for international projects and for multidimensional endeavors that call on their education in the disciplines of MIT’s School of Humanities, Arts, and Social Sciences (SHASS), along with science and technical fields.

“This is one of the few places in the world where I can do both music and science professionally,” says Elaine Chew SM ’98, PhD ’00, an accomplished pianist and professor of digital media at Queen Mary University of London.

“Being here in London helps me be a global citizen, enabling me to stay in touch with both the East and West,” says Huma Yusuf SM ’08, an associate director at Control Risks, a firm that consults on political and cultural issues in the Middle East and Africa.

London is home to a significant cohort of MIT alumni who are deeply engaged in the MIT mission “to make inspiring progress for the world,” in the words of President L. Rafael Reif, who will soon be visiting London for the next MIT Better World Campaign event, which takes place on January 13.

As Reif emphasizes in conversations around the globe, advancing this vision requires “marrying advanced technical and scientific capabilities with a deep understanding of the world’s political, cultural, and economic complexities.”

It is in just such hybrid domains that Angrist, Yusuf, and Chew conduct their pathbreaking work.

As an economics and math major at MIT, Angrist became engaged in using quantitative tools to alleviate poverty. This focus flowed in part from his work in the Abdul Latif Jameel Poverty Action Lab (J-PAL), a research group founded at the MIT Department of Economics.

Another spur for Angrist came from Amphibious Achievement, an after-school enrichment and rowing program he cofounded that aims to boost educational outcomes for urban high school students.

On track for a PhD in economics, Angrist came to an important realization: “I also wanted to understand firsthand, out in the world, the kinds of problems I was working on in front of a computer screen,” he says. In 2013, he landed a Fulbright Scholarship based at the University of Botswana to explore the impact of age disparity in the classroom, and how to improve high school graduation rates. A pivotal encounter there opened up his path for pursuing real-world applications for economics.

A university colleague in Botswana described a widespread phenomenon whereby “older guys give young girls gifts in exchange for unprotected sex,” Angrist says, explaining that “these ‘sugar daddies’ are a major driver of the HIV epidemic in Botswana, where one-quarter of the adult population has the virus.”

Angrist immediately recalled a decade-old J-PAL paper demonstrating that in Kenya, a one-hour “sugar daddy” awareness class reduced pregnancy rates—and by proxy, unprotected sex and HIV rates—by one-third. “I decided then,” he says, “that it was time to turn research into action that affects real people.”

By the following year, Angrist and three colleagues, Moitshepi Matsheng, Brenda Duverce, and Unami Moatswi, had launched Young 1ove, a nongovernmental organization (NGO) dedicated to testing and scaling up the awareness class program and similar evidence-based efforts across the country. With what he calls a “youth army” of facilitators and a mandate from the government to reach every child, Angrist and his team have rolled out pilot programs, testing how effectively they slash HIV and teen pregnancy rates, as well as boost graduation rates. In this process, Young 1ove has, to date, reached 35,000 young Botswanans.

“I’ve taken an unconventional path,” says Angrist, who is building the NGO while completing his dissertation research on development policy at Oxford University. “But at MIT I learned that I could work at the intersection of data and an organization that responds to the data and that actually helps people. This really is my happy place.”

Information and ethics in conflict-prone regions

In her role at the London headquarters of Control Risk, Yusuf assists groups who invest in conflict-prone regions of South Asia and the Middle East make “speedier, more ethical, legally sound, and politically savvy decisions,” she says.

One recent project enabled a major relief charity to accept significant gifts from wealthy donors while avoiding attempts at corruption, and then deliver desperately needed help to a Middle Eastern war zone.

With such projects, she is “getting the best of both worlds,” says Yusuf, who also serves as a global fellow for the Woodrow Wilson International Center in Washington. “I research how things work on the ground, as well as help organizations work more transparently.”

Comparative Media Studies (CMS), a SHASS program that focuses humanities research on the nexus of media, technology, and civic life, had a large hand in shaping Yusuf’s career. “The Internet and social media were taking off,” she says, “and I wanted to be at the forefront of understanding the implications of different media technologies on the ways power and information flowed.”

Yusuf came to CMS in 2006 after doing investigative reporting on human rights, ethnic conflict, and media law for the Dawn Newspaper Group in her native Pakistan. “CMS was the only program for me because of the freedom MIT affords to take quite disparate approaches, meld them together, and find the right answer to a question.”

With CMS colleagues, Yusuf helped to conceive and secure funding for the MIT Center for Civic Media, a joint venture between CMS and the MIT Media Lab dedicated to new technologies that support and foster civic media and political action around the world.

As one of the first fellows at the center, Yusuf researched the impact of news and cultural media production on political dynamics in Karachi, Pakistan. This work, which became her CMS dissertation, serves as the foundation of a forthcoming book with the working title, Who Controls the News? Media, Power and Identity in Pakistan. Yusuf also continues her work as an international journalist focusing on digital technology and politics for notable publications.

“In the CMS program I gained broad analytical skills, the confidence to work across disciplines, and the understanding of how to use new digital platforms to gather and critique information,” she says. “Rigorous academics combined with a practical orientation is what MIT does best—the real-life application of good ideas.”

Insights at the intersection of music and technology

As a child learning to play the piano, Chew was captivated by classical music and the problem-solving possibilities it presents. Today, her work as a professor and a performer involves “making the music I love and the craft of music making understandable for wider audiences.”

In her classes on music and speech modeling, and in her research lab at the Centre for Digital Music at Queen Mary University of London, Chew uses mathematical and computational modeling to illuminate the nuances that shape musical communication, from modulation of volume and phrasing, to subtle changes of color. “Thinking of musical coherence this way opens up a world of possibilities for performers, listeners, and composers alike,” she says.

In essence, Chew’s research makes the ephemeral experience of music more concrete. “A music performance, especially when it is not recorded, leaves no real trace in the world,” she says. But by deconstructing and visualizing music performance—via computer renderings and concert conversations—Chew aims to bring “a different level of reality, of knowing, to people who are encountering a musical work for the first time.”

Her work in this area reflects the ethos of the MIT music program where she studied. “The MIT mission is to serve humanity,” says Institute Professor Marcus Thompson, “and the arts provide a powerful way for our students to grow in knowledge and understanding of the human condition.”

Chew pursued both music and mathematical sciences through her undergraduate years, and was drawn to MIT by its program in operations research and its conservatory-level music program. Pursuing both music and science at a high level, separately, was challenging, Chew says, but “Jeanne Bamberger [now professor emerita of music] saved me. She pointed me to research applying computer models to music, and I suddenly could see a lifetime of work cut out for me.”

Chew found that her MIT advisors “had a strong belief about the deep connections between fields,” she says. “It was one of the only places in the world where this could have happened, and it was the start of my career.”

“It is a great privilege,” she adds, “to be training the next generation of researchers. For a young, interdisciplinary field like music technology, individuals come with different combinations of subject knowledge and I take inspiration from Jeanne in working with students to develop meaningful research projects that build on what they know.”

These dedicated alumni also savor the pleasures of London. Chew loves London’s music scene and her walks on the towpaths along the city’s canals. After the intensities of shaping plans for fraught regions, Yusuf finds restoration on rambles through the British Museum, where she admires the Japanese art collection especially. Angrist enjoys talking with fellow academics “over a pint in a historic pub where people in the past have produced extraordinary work.” He notes with admiration that, “History in the UK is very palpable.”

For these and dozens of other MIT alumni, London is an extraordinary home for endeavors that inform policy, accelerate international cooperation, generate new forms at the intersection of art and technology, and help advance solutions to the political, economic, and cultural dimensions of today’s global issues.