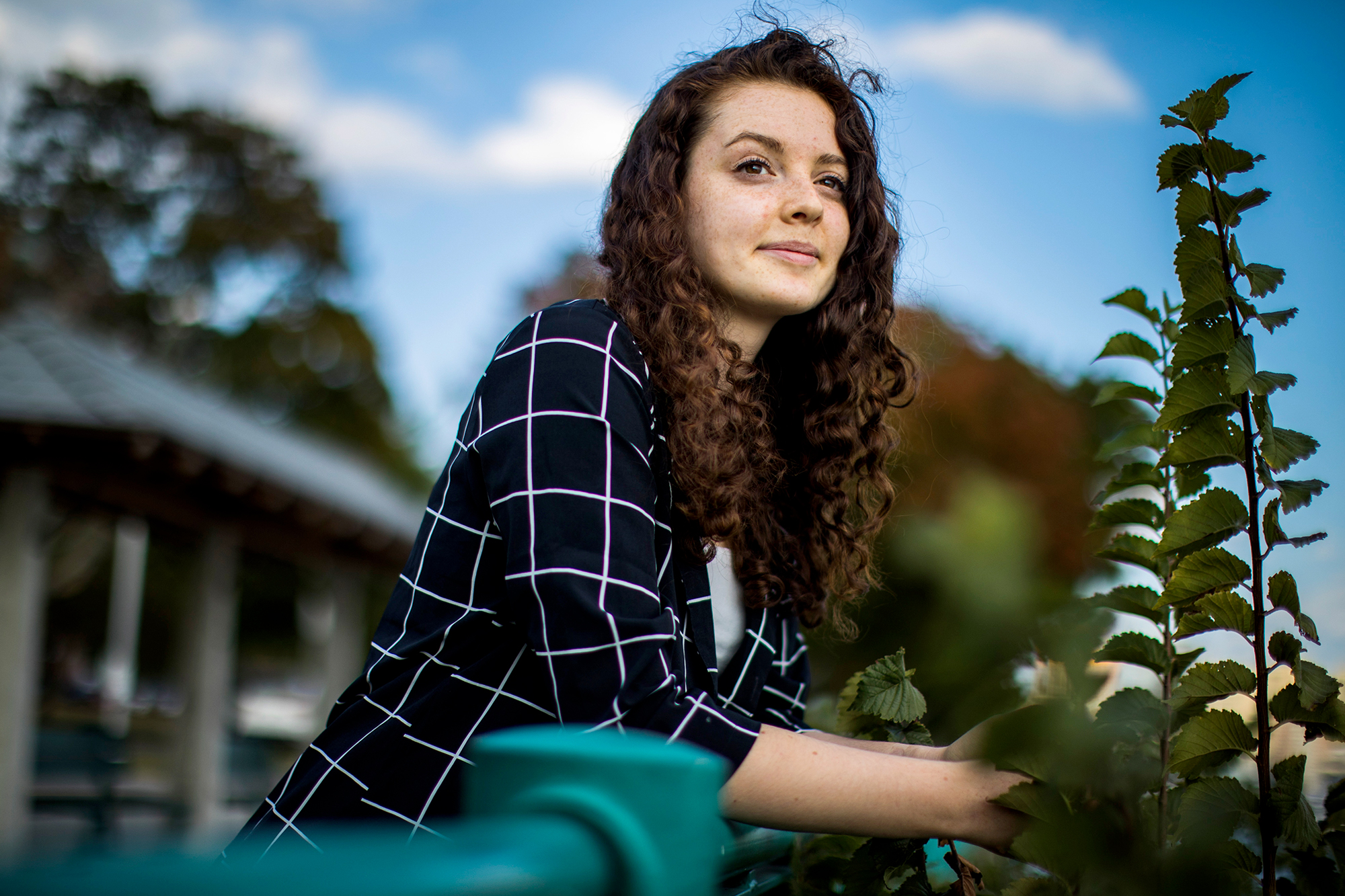 This article was written by Hannah Meiseles and originally appeared on MIT News on October 2, 2020 (photo: Adam Glanzman).

It’s an amazing moment when a topic learned in the classroom comes to life. For senior Darya Guettler, that moment came on a sweltering day while installing solar panels in low-income communities in Los Angeles, alongside workers who had been previously incarcerated.

Guettler was volunteering with an MIT Energy Initiative program called Solar Spring Break, which had partnered with Homeboy Industries, an organization that supports formerly incarcerated individuals through career opportunities in green energy. Drilling the panels into the roofs while sweat dripped down her neck, Guettler finally got a chance to see the utility of solar panels in action. When the volunteers switched on the lights, the members of the community got together and celebrated.

“I’ve never done that before, and it was a very unique experience,” Guettler says, recalling the internship. “As students, we’re usually designing the solar panels. Actually installing them and then turning the power on — it’s like all these families now have power for free and can finally run their air conditioning during the day. It made it all feel real.”

She arrived at MIT with the goal of mitigating climate change through technological innovation, and soon joined the MIT Undergraduate Energy Club, where she says she met inspiring and equally passionate students. Over time, they helped to shape her mindset about what her role could be in helping with the climate crisis. Now the club’s president, Guettler has been working to expand the club’s education outreach programs and encourage kids to get excited about ways they can use engineering to help the planet.

Although Guettler had long understood the need to improve solar technologies, it wasn’t until her Solar Spring Break experience that she made the connection between climate change and the need to involve many different parties in putting together solutions.

“After that, I was kind of hooked on the policy side as well, because I saw that there’s really a space for combining all these things,” she says. “Now all of a sudden it wasn’t just about employing the technology, which I had always been interested in, but also about who was going to be employing it, where it was going to be placed, and how we could make that process as equitable as possible.”

Guettler decided to combine her mechanical engineering major with a degree in political science and has gravitated to classes focused on the intersection of sustainable technologies and climate policy.

“They’re really interesting classes. I’ve got a class about engineering democratic development, one about election modeling, and one in energy storage,” she says. “Honestly, sometimes it’s hard to pick. There’s so many I want to take!”

But of all her classes, one that Guettler is most looking forward to now is her capstone for mechanical engineering, 2.s009 (Explorations in Product Design). The class — which this year challenges students to create social impact projects centered around kindness — begins by placing students into groups and giving them a budget. The groups then design a product and come up with a prototype and a business pitch for it.

“The kindness aspect is pretty much up to the group to decide,” Guettler explains. “It can a project centered around climate change, environmental protection, helping people with disabilities, assisting marginalized communities — I’m super excited to see what people come up with.”

Guttler spent the past summer working in consulting, and in her spare time taught middle and high school students about climate change from her remote cabin in Maine. The classes were taught through MIT Splash, which allows MIT students to teach any topic of their choice to interested younger students.

“It was all online, but it was really fun,” she says. “We just kind of talked about climate models and used this cool tool where you can adjust different policy factors and just see what happens. The kids had so many questions, and I loved getting to build their interest and talk about it with them.”

Talking with people of all ages and backgrounds about ways we can develop a more sustainable future has been a consistent theme throughout Guettler’s experience at MIT. Last year, she visited West Point for the Student Conference on U.S. Affairs, where she spoke with military advisors and generals about the concerns of climate change from a national security perspective.

“I was really interested to see that climate change is also a really big issue to them too, since there’s a lot of bases near coastal waters that will be under threat when sea levels rise,” she says. “There’s definitely been a wide range of people I’ve interacted with about the climate change crisis, but at the end of the day, it’s always the same core concepts. I love hearing people’s different ideas, because more people means more potential solutions, and honestly, at this point, we need any solutions we can get.”

As an elected student to the MIT Committee on Outside Engagements, as well as a founding member of MIT Divest, Guettler hasn’t been shy about the importance of holding political leaders and officials accountable for their decisions.

“I was talking a lot with students to see what they held as important values and what they wanted MIT to represent. Climate action kept on coming up, which led to a bigger discussion of who MIT engages with.”

Her experience so far has been positive overall, and she notes that student representatives have been given a seat on MIT’s Climate Action Advisory Committee, as well as been able to contribute to the MIT Climate Action Plan. The inclusion has allowed students to advocate for ways MIT can take initiative to reduce and offset their energy emissions.

While Guettler recognizes that major institutions have the largest immediate impact on improving the climate crisis, she still wants everyone to recognize the importance of individual actions as well.

“My message to everyone right now is just go and vote, just please go and do that. I’ve been phone banking for different state races right now and people have been hanging up in my face or cursing me out, saying it’s not that serious. I’m like, are you serious?” she laughs. “I honestly think voting right now is the best thing you can do for the climate. Even if you’re feeling overwhelmed, even if you don’t feel like you can make an impact — you have an important decision that you can make. Now just go and vote for it!”