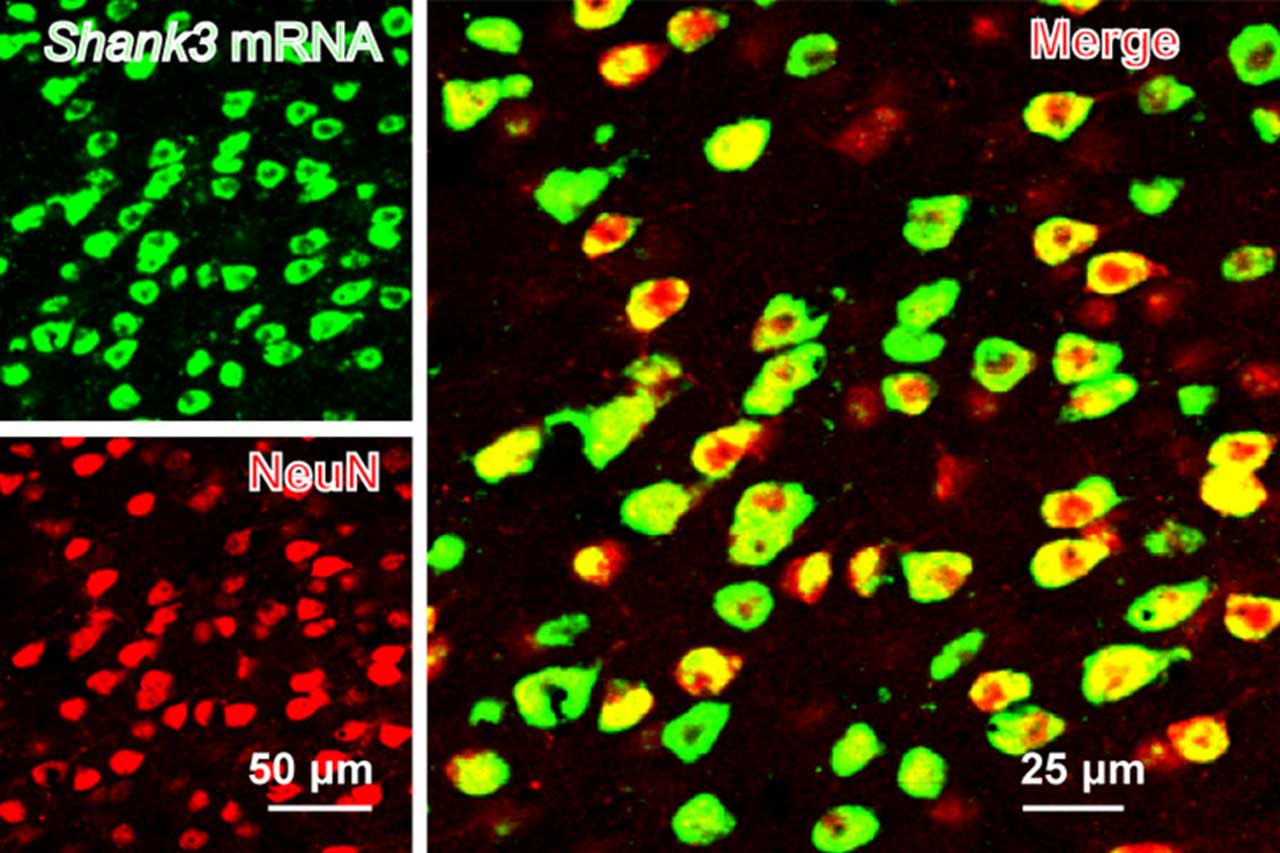 Although psychiatric disorders can be linked to particular genes, the brain regions and mechanisms underlying particular disorders are not well-understood. Mutations or deletions of the SHANK3 gene are strongly associated with autism spectrum disorder (ASD) and a related rare disorder called Phelan-McDermid syndrome. Mice with SHANK3 mutations also display some of the traits associated with autism, including avoidance of social interactions, but the brain regions responsible for this behavior have not been identified.

A new study by neuroscientists at MIT and colleagues in China provides clues to the neural circuits underlying social deficits associated with ASD. The paper, published in Nature Neuroscience, found that structural and functional impairments in the anterior cingulate cortex (ACC) of SHANK3 mutant mice are linked to altered social interactions.

“Neurobiological mechanisms of social deficits are very complex and involve many brain regions, even in a mouse model,” explains Guoping Feng, the James W. and Patricia T. Poitras Professor at MIT and one of the senior authors of the study. “These findings add another piece of the puzzle to mapping the neural circuits responsible for this social deficit in ASD models.”

The Nature Neuroscience paper is the result of a collaboration between Feng, who is also an investigator at MIT’s McGovern Institute and a senior scientist in the Broad Institute’s Stanley Center for Psychiatric Research, and Wenting Wang and Shengxi Wu at the Fourth Military Medical University, Xi’an, China.

In the new study, the authors instead focused on the ACC, a brain region noted for its role in social functions in humans and animal models. The ACC is also known to play a role in fundamental cognitive processes, including cost-benefit calculation, motivation, and decision making.

In mice lacking SHANK3, the researchers found structural and functional disruptions at the synapses, or connections, between excitatory neurons in the ACC. The researchers went on to show that the loss of SHANK3 in excitatory ACC neurons alone was enough to disrupt communication between these neurons and led to unusually reduced activity of these neurons during behavioral tasks reflecting social interaction.

Having implicated these ACC neurons in social preferences and interactions in SHANK3 knockout mice, the authors then tested whether activating these same neurons could rescue these behaviors. Using optogenetics and specfic drugs, the researchers activated the ACC neurons and found improved social behavior in the SHANK3 mutant mice.

“Next, we are planning to explore brain regions downstream of the ACC that modulate social behavior in normal mice and models of autism,” explains Wenting Wang, co-corresponding author on the study. “This will help us to better understand the neural mechanisms of social behavior, as well as social deficits in neurodevelopmental disorders.”

Previous clinical studies reported that anatomical structures in the ACC were altered and/or dysfunctional in people with ASD, an initial indication that the findings from SHANK3 mice may also hold true in these individuals.

This story was written by Sabbi Lall at the McGovern Institute for Brain Research and was published on MIT on July 26, 2019. Image courtesy of Guoping Feng.