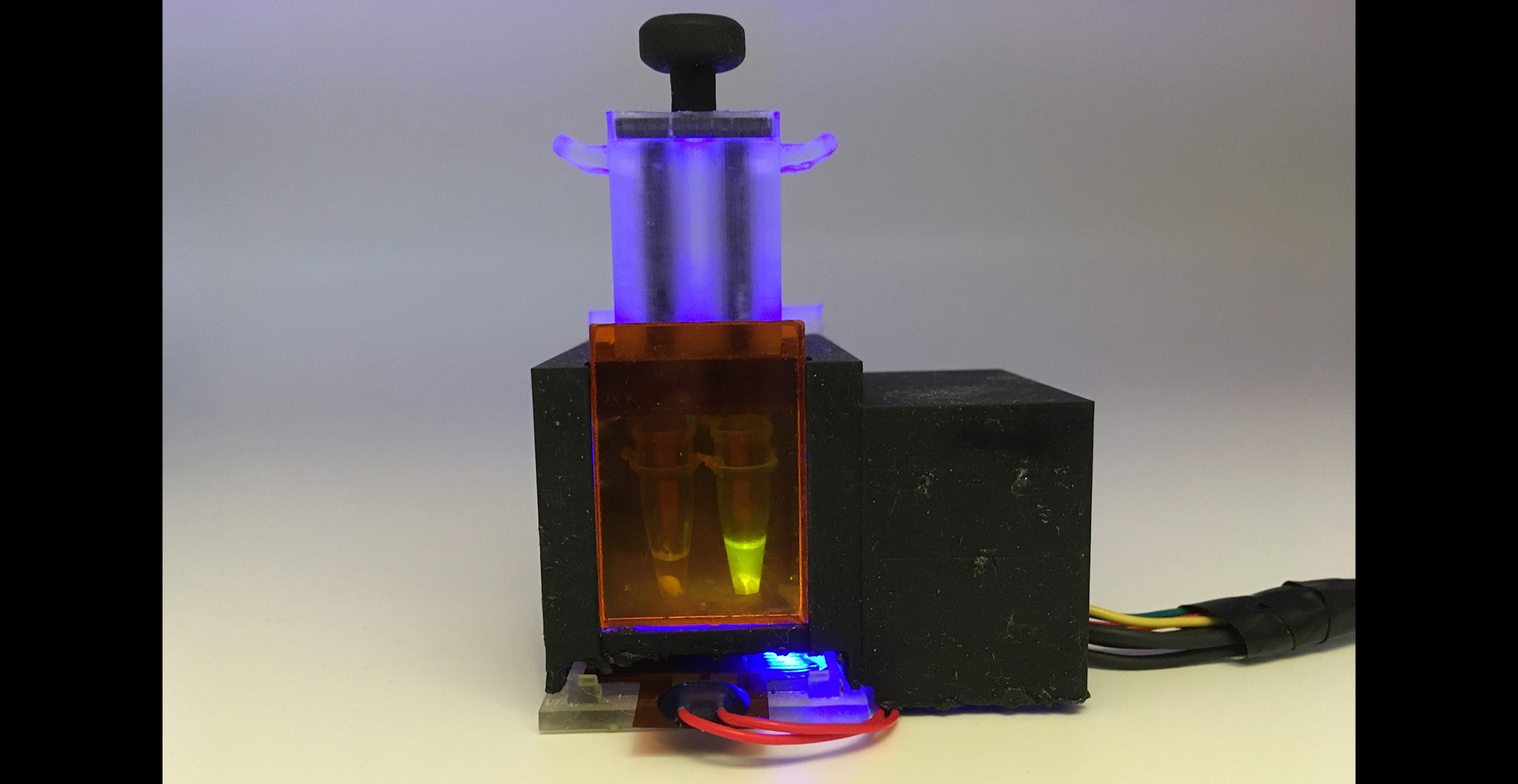 Engineers at MIT and Harvard University have designed a small tabletop device that can detect SARS-CoV-2 from a saliva sample in about an hour. In a new study, they showed that the diagnostic is just as accurate as the PCR tests now used.

The device can also be used to detect specific viral mutations linked to some of the SARS-CoV-2 variants that are now circulating. This result can also be obtained within an hour, potentially making it much easier to track different variants of the virus, especially in regions that don’t have access to genetic sequencing facilities.

“We demonstrated that our platform can be programmed to detect new variants that emerge, and that we could repurpose it quite quickly,” says James Collins, the Termeer Professor of Medical Engineering and Science in MIT’s Institute for Medical Engineering and Science (IMES) and Department of Biological Engineering. “In this study, we targeted the U.K., South African, and Brazilian variants, but you could readily adapt the diagnostic platform to address the Delta variant and other ones that are emerging.”

The new diagnostic, which relies on CRISPR technology, can be assembled for about $15, but those costs could come down significantly if the devices were produced at large scale, the researchers say.

Collins, who is also a member of the Broad Institute of Harvard and MIT, is the senior author of the new study, which appears today in Science Advances. The paper’s lead authors are Helena de Puig, a postdoc at Harvard University’s Wyss Institute for Biologically Inspired Engineering; Rose Lee, an instructor in pediatrics at Boston Children’s Hospital and Beth Israel Deaconess Medical Center and a visiting fellow at the Wyss Institute; Devora Najjar, a graduate student in MIT’s Media Lab; and Xiao Tan, a clinical fellow at the Wyss Institute and an instructor in gastroenterology at Massachusetts General Hospital.

The new diagnostic is based on SHERLOCK, a CRISPR-based tool that Collins and others first reported in 2017. Components of the system include an RNA guide strand that allows detection of specific target RNA sequences, and Cas enzymes that cleave those sequences and produce a fluorescent signal. All of these molecular components can be freeze-dried for long-term storage and reactivated upon exposure to water.

Last year, Collins’ lab began working on adapting this technology to detect the SARS-CoV-2 virus, hoping that they could design a diagnostic device that could yield rapid results and be operated with little or no expertise. They also wanted it to work with saliva samples, making it even easier for users.

To achieve that, the researchers had to incorporate a critical pre-processing step that disables enzymes called salivary nucleases, which destroy nucleic acids such as RNA. Once the sample goes into the device, the nucleases are inactivated by heat and two chemical reagents. Then, viral RNA is extracted and concentrated by passing the saliva through a membrane.

“That membrane was key to collecting the nucleic acids and concentrating them so that we can get the sensitivity that we are showing with this diagnostic,” Lee says.

This RNA sample is then exposed to freeze-dried CRISPR/Cas components, which are activated by automated puncturing of sealed water packets within the device. The one-pot reaction amplifies the RNA sample and then detects the target RNA sequence, if present.

“Our goal was to create an entirely self-contained diagnostic that requires no other equipment,” Tan says. “Essentially the patient spits into this device, and then you push down a plunger and you get an answer an hour later.”

The researchers designed the device, which they call minimally instrumented SHERLOCK (miSHERLOCK), so that it can have up to four modules that each look for a different target RNA sequence. The original module contains RNA guide strands that detect any strain of SARS-CoV-2. Other modules are specific to mutations associated with some of the variants that have arisen in the past year, including B.1.1.7, P.1, and B.1.351.

The Delta variant was not yet widespread when the researchers performed this study, but because the system is already built, they say it should be straightforward to design a new module to detect that variant. The system could also be easily programmed to monitor for new mutations that could make the virus more infectious.

“If you want to do more of a broad epidemiological survey, you can design assays before a mutation of concern appears in a population, to monitor for potentially dangerous mutations in the spike protein,” Najjar says.

The researchers first tested their device with human saliva spiked with synthetic SARS-CoV-2 RNA sequences, and then with about 50 samples from patients who had tested positive for the virus. They found that the device was just as accurate as the gold standard PCR tests now used, which require nasal swabs and take more time and significantly more hardware and sample handling to yield results.

The device produces a fluorescent readout that can be seen with the naked eye, and the researchers also designed a smartphone app that can read the results and send them to public health departments for easier tracking.

The researchers believe their device could be produced at a cost as low as $2 to $3 per device. If approved by the FDA and manufactured at large scale, they envision that this kind of diagnostic could be useful either for people who want to be able to test at home, or in health care centers in areas without widespread access to PCR testing or genetic sequencing of SARS-CoV-2 variants.

“The ability to detect and track these variants is essential to effective public health, but unfortunately, variants are currently diagnosed only by nucleic acid sequencing at specialized epidemiological centers that are scarce even in resource-rich nations,” de Puig says.

The research was funded by the Wyss Institute; the Paul G. Allen Frontiers Group; the Harvard University Center for AIDS Research, which is supported by the National Institutes of Health; a Burroughs-Wellcome American Society of Tropical Medicine and Hygiene postdoctoral fellowship; an American Gastroenterological Association Takeda Pharmaceutical Research Scholar Award; and an MIT-TATA Center fellowship.

This story was written by Anne Trafton and was published on MIT News on August 6, 2021. Photo credit: Devora Najjar

Institute for Medical Engineering and Science