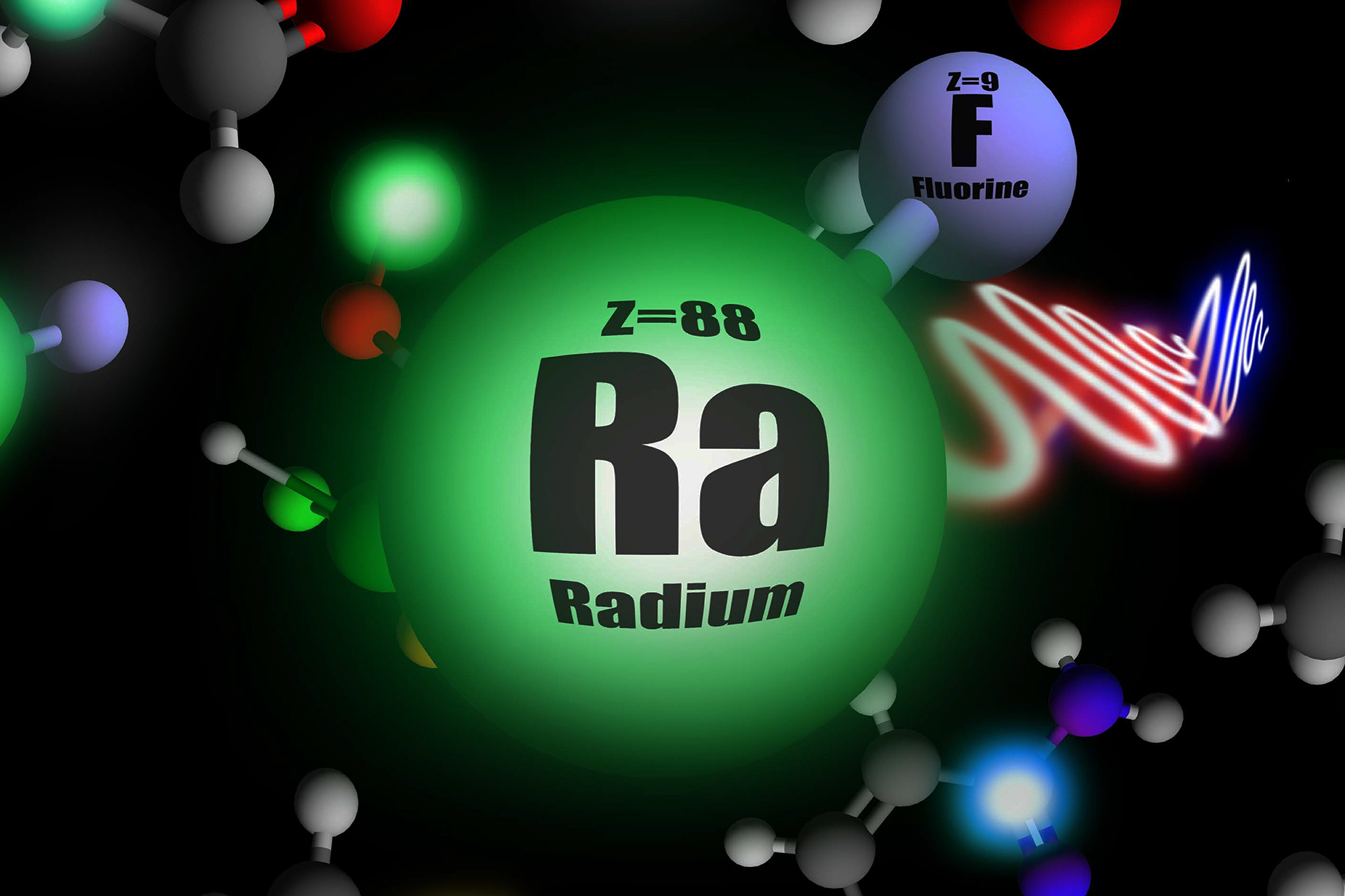 This article was originally published on MIT News on May 27, 2020.

Researchers at MIT and elsewhere have combined the power of a supercollider with techniques of laser spectroscopy to precisely measure a short-lived radioactive molecule, radium monofluoride, for the first time.

Precision studies of radioactive molecules open up possibilities for scientists to search for new physics beyond the Standard Model, such as phenomena that violate certain fundamental symmetries in nature, and to look for signs of dark matter. The team’s experimental technique could also be used to perform laboratory studies of radioactive molecules produced in astrophysical processes.

“Our results pave the way to high-precision studies of short-lived radioactive molecules, which could offer a new and unique laboratory for research in fundamental physics and other fields,” says the study’s lead author, Ronald Fernando Garcia Ruiz, assistant professor of physics at MIT.

Garcia Ruiz’s colleagues include Alex Brinson, an MIT graduate student, along with an international team of researchers working at CERN, the European Organization for Nuclear Research in Geneva. The results were published on May 27, 2020, in the journal Nature.

The simplest molecule is made from two atoms, each with a nucleus comprising a certain number of protons and neutrons that make one atom heavier than the other. Each nucleus is surrounded by a cloud of electrons. In the presence of an electric field, these electrons can be redistributed to create an extremely large electric field within the molecule.

Physicists have used molecules and their electric fields as miniature laboratories to study the fundamental properties of electrons and other subatomic particles. For instance, when a bound electron interacts with the molecule’s electric field, its energy can change as a result, which scientists can measure to infer the electron’s properties, such as its electrostatic dipole moment, which provides a measurement of its deviation from a spherical shape.

According to the Standard Model of particle physics, elementary particles should be roughly spherical, or have a negligible electrostatic dipole moment. If, however, a permanent electric dipole moment of a particle or a system exists, this would imply that certain processes in nature are not as symmetrical as physicists had assumed.

For instance, physicists believe that most fundamental laws of physics should remain unchanged with the direction of time—a principle known as time reversal symmetry. That is, regardless of whether time runs forward or backward, gravity, for example, should cause a ball to fall off a cliff, or roll back up, along the same path in velocity and space. If, however, an electron is not perfectly spherical, this would indicate that time reversal symmetry is violate. This violation would provide a much-needed condition for explaining why there is more matter than antimatter in our universe.

Because of their high electric fields and unique nuclear shapes, radioactive molecules would make natural laboratories in which to probe not only the electron’s structure, but also symmetry-violating nuclear properties. But these molecules are short-lived, and scientists have been unable to pin them down.

“These radioactive molecules are very rare in nature and some of them cannot be found in our planet, but can be abundant in astrophysical processes such as stellar explosions, or neutron star mergers,” Garcia Ruiz says. “So we have to make them artificially, and the main challenges have been that they can only be produced in small quantities at high temperatures, and can be very short-lived.”

A needle in the dark

The team looked for a way to make radium monofluoride, or RaF—a radioactive molecule that contains a very heavy, unstable radium atom and a fluoride atom. This molecule is of particular interest because certain isotopes of the radium nucleus are themselves asymmetrical, resembling a pear, with more mass on one end of the nucleus than the other.

What’s more, theorists had predicted that the energy structure of radium monofluoride would make the molecule amenable to laser cooling, a technique that uses lasers to bring down the temperature of molecules, and slow them down enough to perform precision studies. While most molecules have many energy states they can occupy, with large numbers of vibrational and rotational states, it turns out that radium monofluoride favors electronic transitions between a few main energy levels—an unusually simple molecule to control, using laser cooling.

The team was able to measure molecules of RaF by first making small quantities of the molecule using CERN’s Isotope mass Separator On-Line, or ISOLDE facility, which they then manipulated and studied with lasers using the Collinear Resonance Ionization Spectroscopy (CRIS) experiment.

In their experiment, the researchers utilized CERN’s Proton Synchrotron Booster, a series of rings that receive protons from a particle accelerator and accelerate the protons. The team fired these protons at a target made of uranium carbide at such high energies that the onslaught destroyed uranium, producing a shower of protons and neutrons that mixed to form a mix of radioactive nuclei, including radium.

The researchers then injected a gas of carbon tetrafluoride, which reacted with radium to make charged, or ionic molecules of radium monofluoride, which they separated from the rest of uranium’s byproducts through a system of mass-separating magnets. They then pinned down the molecules in an ion trap and surrounded them with helium gas, which cooled the molecules down enough for the researchers to measure them.

Next, the team measured the molecules by reaccelerating and passing them through the CRIS setup, where the ionic molecules interacted with sodium atoms that gave an electron to each molecule to neutralize the beam of molecules in flight. The neutral molecules then continued through an interaction region, where the researchers also shone two laser beams—one red, the other blue.

The team tuned the red laser’s frequency up and down and found that at certain wavelengths, the laser resonated with the molecules, exciting an electron in the molecule to another energy level, such that the blue laser then had enough energy to remove the electron from the molecule. The resonantly excited molecules, made ionic again, were deflected and collected onto a particle detector, allowing the researchers to measure, for the first time, their energy levels, and the associated molecular properties which demonstrate that the structure of these molecules is indeed favorable for laser cooling.

“Previous to our measurements, all the energy levels of these molecules were unknown,” Garcia Ruiz says. “This has been like trying to find a needle in a dark room many hundreds of meters wide. Now that we’ve found the needle, we can measure the properties of that needle and start playing with it.”

Discovery Science School of Engineering School of Science
Give to MIT