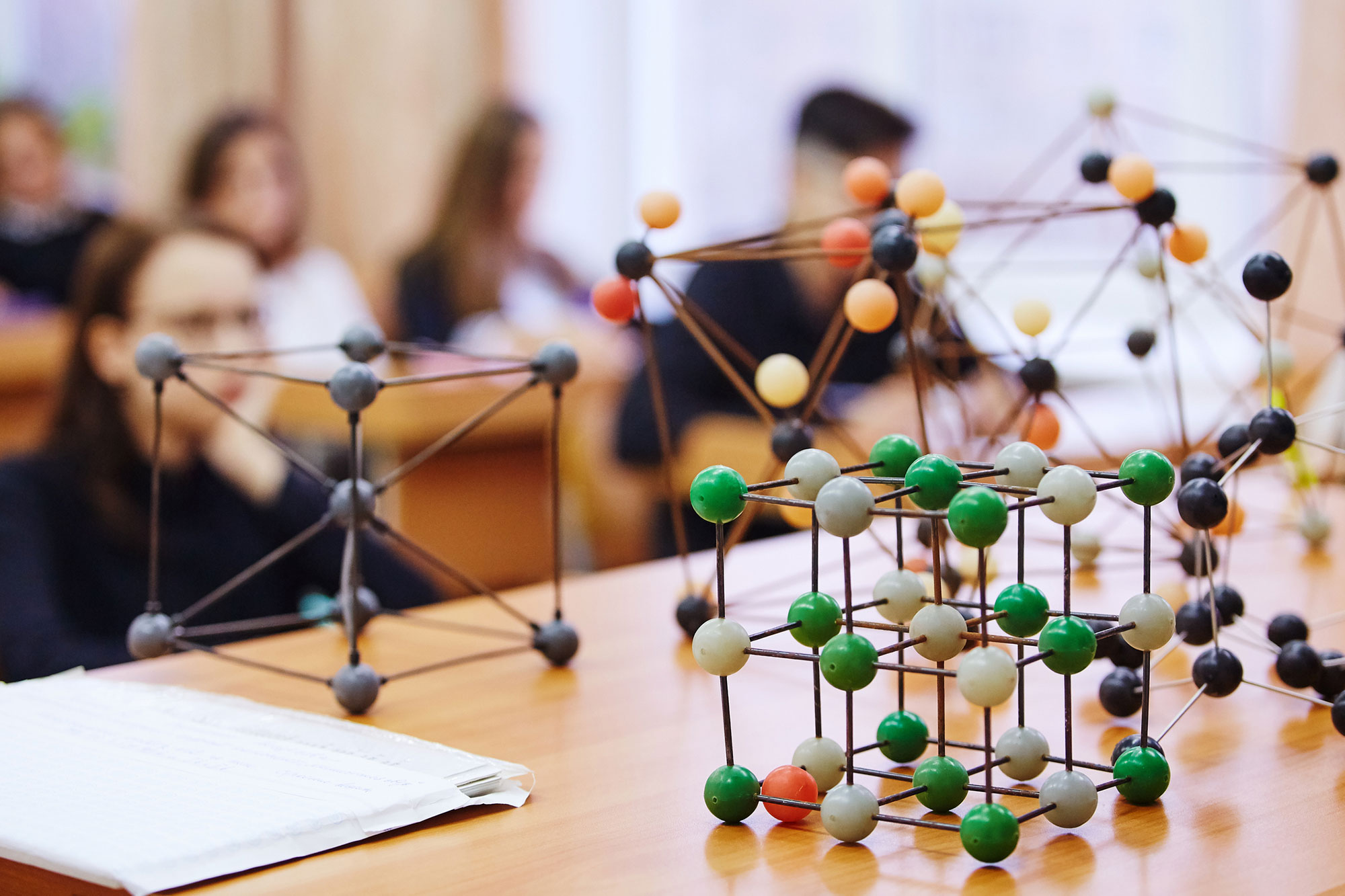 It’s a cloudy July afternoon in Cambridge, Massachusetts, and MIT Edgerton Center Instructor Amanda Mayer is using brightly-colored plastic to build proteins. She takes a small yellow block and moves it to the end of a chain of blue and green ones, clicking it into place. “Congratulations,” she says to the four high school students guiding her hand over Zoom. “You’ve all become synthetic biologists.”

Together, the group has assembled a model of the complex molecules found in their food and bodies. “I used to think proteins were just one thing,” says a high school student named Fatima, who has the same blocks laid out before her at home. “Now I know that what I ate has lots and lots of amino acids in it.”

Mayer is one of two biologists who are crafting models and lesson plans that schoolteachers around the country—and the world—are using to teach their students about one of the most fundamental concepts in biology: how cells use DNA to make proteins. Both she and Kathy Vandiver, MIT Edgerton Center advisor and director of the Community Outreach Education and Engagement Core at the MIT Center for Environmental Health Sciences, discovered their love for sharing biology with schoolchildren after completing their PhDs.

Vandiver, who spent 16 years teaching middle school science before joining MIT in 2005, created classroom models throughout her career. In 2008, Mayer joined her at the Edgerton Center, helping her perfect the lessons and activity booklets that accompany the models. The duo uses their sets to teach students and schoolteachers as well as nurses and biotechnologists. “This is about helping other people learn more about biology, and making it much more accessible,” Vandiver says.

Plastic models allow students to use building blocks to simulate DNA synthesis. Left: The models reflect both the form and function of DNA. Right, top: A protein in the cell membrane. Right, bottom: Protein synthesis taking place on a ribosome (green).

In school, students learn that DNA determines the features they inherit from their parents, like the color of their eyes. This is because DNA contains the instructions for making proteins, which in turn make up our cells. Vandiver says that even though protein synthesis is the one lesson that every biology teacher has to teach, proteins don’t always get the attention they deserve. “DNA is the glamour molecule—it’s on T-shirts everywhere,” she says. “But DNA just stores the instructions for building proteins. They do all the work in the cell.”

Vandiver believes that if students are to grasp tricky processes like protein synthesis, they need more than just the labeled diagrams found frequently in science classrooms. Tactile decision making is a much more engaging method of learning than looking at a diagram, or even watching a video, she says. “When you watch a cell do different things, you can still tune out. But here, you have to make a decision.”

Since students can learn by doing, they’re also not held back by the pressure to master vocabulary, a typical hurdle in the biology classroom. The models are useful for various levels: a sixth grader may use them simply as building blocks, while older students can use clever design details to learn higher-level concepts, such as directionality and bond strength.

Vandiver and Mayer are careful to put as much thought into the lessons that accompany the models. For a protein to do its job, its building blocks must be strung together in the right sequence. The standard classroom strategy for teaching protein synthesis is a chronological one, Vandiver says, in which the information stored in DNA is first transferred to another molecule called RNA, and then finally to proteins.

“But it’s so confusing for the students. They’re going through this multitude of steps, and they have no idea what they’re making,” she explains. Over the years, as Vandiver and Mayer taught thousands of students of different ages at the MIT Museum, they observed that students learned protein synthesis much better if they already knew what the end product looked like. So, in their lessons, students begin with a finished protein, containing a specific sequence of amino acids. Then they start from scratch, learning and following the body’s steps for putting those pieces together.

Throughout the year, Mayer and Vandiver hold workshops for teachers in Massachusetts, Texas, and Arizona, training them on how to use the kits. With the help of a grant, they’ve distributed sets to 30 of Boston’s public high schools for teachers to use in their classrooms.

Mayer says that after working with the kits, teachers understand the material much better and feel more confident about teaching it. “Teaching teachers is fantastic,” she says. “Think of all the students they’ll teach in their lifetimes, and how many biologists they’re going to create by making students excited about doing this.”

The DNA kits are also being used in other countries; Vandiver has trained teachers in Italy, India, China, Singapore, Cambodia, and Mexico. When the center occasionally hosts students from abroad, Mayer and Vandiver hold workshops for them.

They also work with local students. For the past five summers, MIT’s biology department has partnered with the LEAH Knox Scholars program to host talented high-school students from communities underrepresented in science. Every year, the Edgerton Center kicks the program off by offering the students a crash course in molecular biology. “With the DNA kits, I actually felt like I was inside the cell in some way,” says Breetika Maharjan, a high-school senior who attended one of the workshops. “It wasn’t like a boring high-school textbook with just words.”

Mayer and Vandiver say they’ve still got a lot to do. Since 2014, they’ve been importing the parts for their kits from Singapore and assembling them in Cambridge with the help of volunteers; this allows them to offer the kits to educators at cost. They have a new set on chromosomes on the way, and they’re constantly designing lessons for new audiences such as nurses, who may soon be caring for patients with DNA-tailored treatment plans.

“The number one comment we get from people after they go through our lessons and play with this is, ‘Oh wow, if I had this, I would probably have liked biology. I might even have become a biology researcher,’” says Mayer.

Vandiver believes the kits are successful because they embody Doc Edgerton’s memorable motto about teaching:  “The trick to education,” she quotes, “is to not let them know they’re learning anything until it’s too late.”

This story was written by Zain Humayun and was originally published on MIT News on August 26, 2022. Photo courtesy of the MIT Startup Exchange.