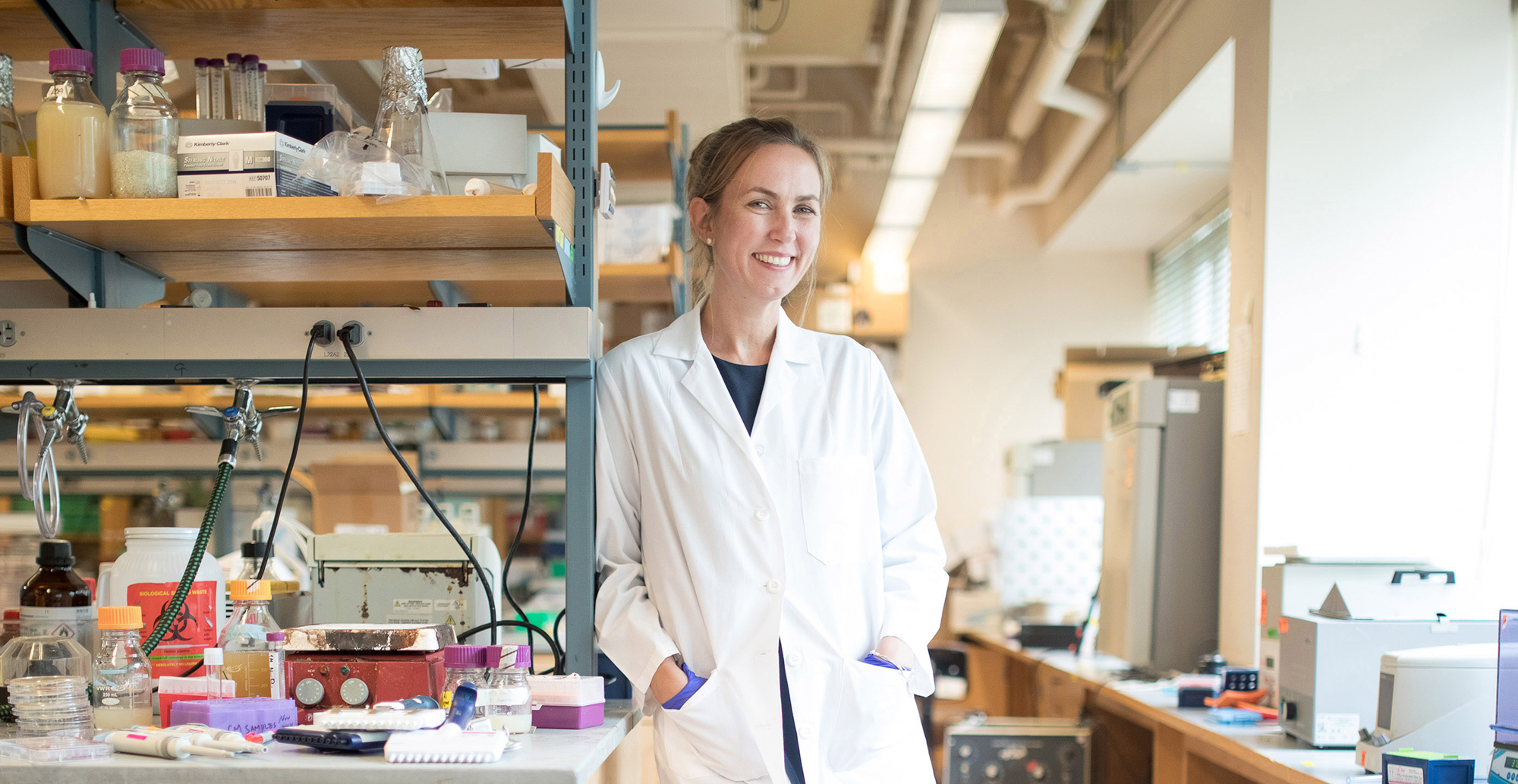 More than just a sign of illness, mucus is a critical part of our body’s defenses against disease. Every day, our bodies produce more than a liter of the slippery substance, covering a surface area of more than 400 square meters to trap and disarm microbial invaders.

Mucus is made from mucins — proteins that are decorated with sugar molecules. Many scientists are trying to create synthetic versions of mucins in hopes of replicating their beneficial traits. In a new study, researchers from MIT have now generated synthetic mucins with a polymer backbone that more accurately mimic the structure and function of naturally occurring mucins. The team also showed that these synthetic mucins could effectively neutralize the bacterial toxin that causes cholera.

The findings could help give researchers a better idea of which features of mucins contribute to different functions, especially their antimicrobial functions, says Laura Kiessling, the Novartis Professor of Chemistry at MIT. Replicating those functions in synthetic mucins could eventually lead to new ways to treat or prevent infectious disease, and such materials may be less likely to lead to the kind of resistance that occurs with antibiotics, she says.

“We would really like to understand what features of mucins are important for their activities, and mimic those features so that you could block virulence pathways in microbes,” says Kiessling, who is the senior author of the new study.

Kiessling’s lab worked on this project with Katharina Ribbeck, the Andrew (1956) and Erna Viterbi Professor of Biological Engineering, and Richard Schrock, the F.G. Keyes Professor Emeritus of Chemistry, who are also authors of the paper. The lead authors of the paper, which appears today in ACS Central Science, are former MIT graduate student Austin Kruger and MIT postdoc Spencer Brucks.

Kiessling and Ribbeck joined forces to try to create mucus-inspired materials in 2018, with funding from a Professor Amar G. Bose Research Grant. The primary building blocks of mucus are mucins — long, bottlebrush-like proteins with many sugar molecules called glycans attached. Ribbeck has discovered that these mucins disrupt many key functions of infectious bacteria, including their ability to secrete toxins, communicate with each other, and attach to cellular surfaces.

Those features have led many scientists to try to generate artificial versions that could help prevent or treat bacterial infection. However, mucins are so large that it has been difficult to replicate their structure accurately. Each mucin polymer has a long backbone consisting of thousands of amino acids, and many different glycans can be attached to these backbones.

In the new study, the researchers decided to focus on the backbone of the polymer. To try to replicate its structure, they used a reaction called ring-opening metathesis polymerization. During this type of reaction, a carbon-containing ring is opened up to form a linear molecule containing a carbon-carbon double bond. These molecules can then be joined together to form long polymers.

In 2005, Schrock shared the Nobel Prize in Chemistry for his work developing catalysts that can drive this type of reaction. Later, he developed a catalyst that could yield specifically the “cis” configuration of the products. Each carbon atom in the double bond usually has one other chemical group attached to it, and in the cis configuration, both of these groups are on the same side of the double bond. In the “trans” configuration, the groups are on opposite sides.

To create their polymers, the researchers used Schrock’s catalyst, which is based on tungsten, to form cis versions of mucin mimetic polymers. They compared these polymers to those produced by a different, ruthenium-based catalyst, which creates trans versions. They found that the cis versions were much more similar to natural mucins — that is, they formed very elongated, water-soluble polymers. In contrast, the trans polymers formed globules that clumped together instead of stretching out.

The researchers then tested the synthetic mucins’ ability to mimic the functions of natural mucins. When exposed to the toxin produced by Vibrio cholerae, the elongated cis polymers were much better able to capture the toxin than the trans polymers, the researchers found. In fact, the synthetic cis mucin mimics were even more effective than naturally occurring mucins.

The researchers also found that their elongated polymers were much more soluble in water than the trans polymers, which could make them useful for applications such as eye drops or skin moisturizers.

Now that they can create synthetic mucins that effectively mimic the real thing, the researchers plan to study how mucins’ functions change when different glycans are attached to the backbones. By altering the composition of the glycans, they hope to develop synthetic mucins that can dampen virulence pathways of a variety of microbes.

“We’re thinking about ways to even better mimic mucins, but this study is an important step in understanding what’s relevant,” Kiessling says.

This story was written by Anne Trafton and was published on MIT News on March 30, 2021. Photo credit: Bryce Vickmark