NASA’s Transiting Exoplanet Survey Satellite, or TESS, has discovered three new worlds that are among the smallest, nearest exoplanets known to date. The planets orbit a star just 73 light-years away and include a small, rocky super-Earth and two sub-Neptunes — planets about half the size of our own icy giant.

Nevertheless, this new planetary system, which astronomers have dubbed TOI-270, is proving to have other curious qualities. For instance, all three planets appear to be relatively close in size. In contrast, our own solar system is populated with planetary extremes, from the small, rocky worlds of Mercury, Venus, Earth, and Mars, to the much more massive Jupiter and Saturn, and the more remote ice giants of Neptune and Uranus.

There’s nothing in our solar system that resembles an intermediate planet, with a size and composition somewhere in the middle of Earth and Neptune. But TOI-270 appears to host two such planets: both sub-Neptunes are smaller than our own Neptune and not much larger than the rocky planet in the system.

Astronomers believe TOI-270’s sub-Neptunes may be a “missing link” in planetary formation, as they are of an intermediate size and could help researchers determine whether small, rocky planets like Earth and more massive, icy worlds like Neptune follow the same formation path or evolve separately.

TOI-270 is an ideal system for answering such questions, because the star itself is nearby and therefore bright, and also unusually quiet. The star is an M-dwarf, a type of star that is normally extremely active, with frequent flares and solar storms. TOI-270 appears to be an older M-dwarf that has since quieted down, giving off a steady brightness, against which scientists can measure many properties of the orbiting planets, such as their mass and atmospheric composition.

“There are a lot of little pieces of the puzzle that we can solve with this system,” says Maximilian Günther, a postdoc in MIT’s Kavli Institute for Astrophysics and Space Research and lead author of a study published today in Nature Astronomy that details the discovery. “You can really do all the things you want to do in exoplanet science, with this system.” 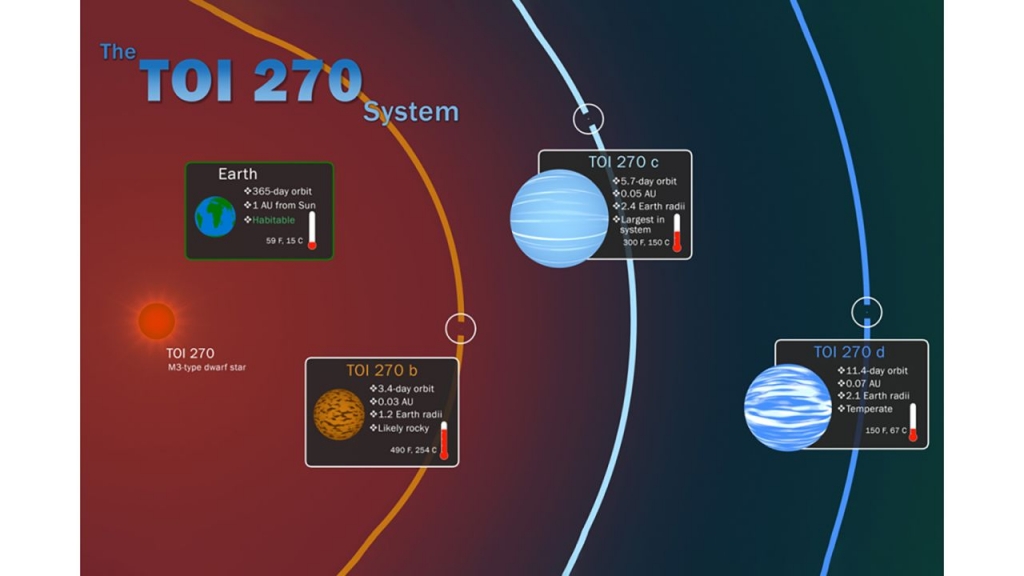 The infographic above illustrates key features of the TOI 270 system, located about 73 light-years away in the southern constellation Pictor. Credits:Credit: NASA’s Goddard Space Flight Center/Scott Wiessinger

Günther and his colleagues detected the three new planets after looking through measurements of stellar brightness taken by TESS. The MIT-developed satellite stares at patches of the sky for 27 days at a time, monitoring thousands of stars for possible transits — characteristic dips in brightness that could signal a planet temporarily blocking the star’s light as it passes in front of it.

The team isolated several such signals from a nearby  star, located 73 light years away in the southern sky. They named the star TOI-270, for the 270th “TESS Object of Interest” identified to date. The researchers used ground-based instruments to follow up on the star’s activity, and confirmed that the signals are the result of three orbiting exoplanets: planet b, a rocky super-Earth with a roughly three-day orbit; planet c, a sub-Neptune with a five-day orbit; and planet d, another sub-Neptune slightly further out, with an 11-day orbit.

Günther notes that the planets seem to line up in what astronomers refer to as a “resonant chain,” meaning that the ratio of their orbits are close to whole integers — in this case, 3:5 for the inner pair, and 2:1 for the outer pair — and that the planets are therefore in “resonance” with each other. Astronomers have discovered other small stars with similarly resonant planetary formations. And in our own solar system, the moons of Jupiter also happen to line up in resonance with each other.

“For TOI-270, these planets line up like pearls on a string,” Günther says. “That’s a very interesting thing, because it lets us study their dynamical behavior. And you can almost expect, if there are more planets, the next one would be somewhere further out, at another integer ratio.”

TOI-270’s discovery initially caused a stir of excitement within the TESS science team, as it seemed, in the first analysis, that planet d might lie in the star’s habitable zone, a region that would be cool enough for the planet’s surface to support water, and possibly life. But the researchers soon realized that the planet’s atmosphere was probably extremely thick, and would therefore generate an intense greenhouse effect, causing the planet’s surface to be too hot to be habitable.

But Günther says there is a good possibility that the system hosts other planets, further out from planet d, that might well lie within the habitable zone. Planet d, with an 11-day orbit, is about 10 million kilometers out from the star. Günther says that, given that the star is small and relatively cool — about half as hot as the sun — its habitable zone could potentially begin at around 15 million kilometers. But whether a planet exists within this zone, and whether it is habitable, depends on a host of other parameters, such as its size, mass, and atmospheric conditions.

Fortunately, the team writes in their paper that “the host star, TOI-270, is remarkably well-suited for future habitability searches, as it is particularly quiet.” The researchers plan to focus other instruments, including the upcoming James Webb Space Telescope, on TOI-270, to pin down various properties of the three planets, as well as search for additional planets in the star’s habitable zone.

“TOI-270 is a true Disneyland for exoplanet science, and one of the prime systems TESS was set out to discover,” Günther says. “It is an exceptional laboratory for not one, but many reasons — it really ticks all the boxes.”

This research was funded, in part, by NASA.

This article was written by Jennifer Chu and originally appeared on MIT News on July 29, 2019. The image is courtesy of the researchers.

Basic Research School of Science
Give to MIT