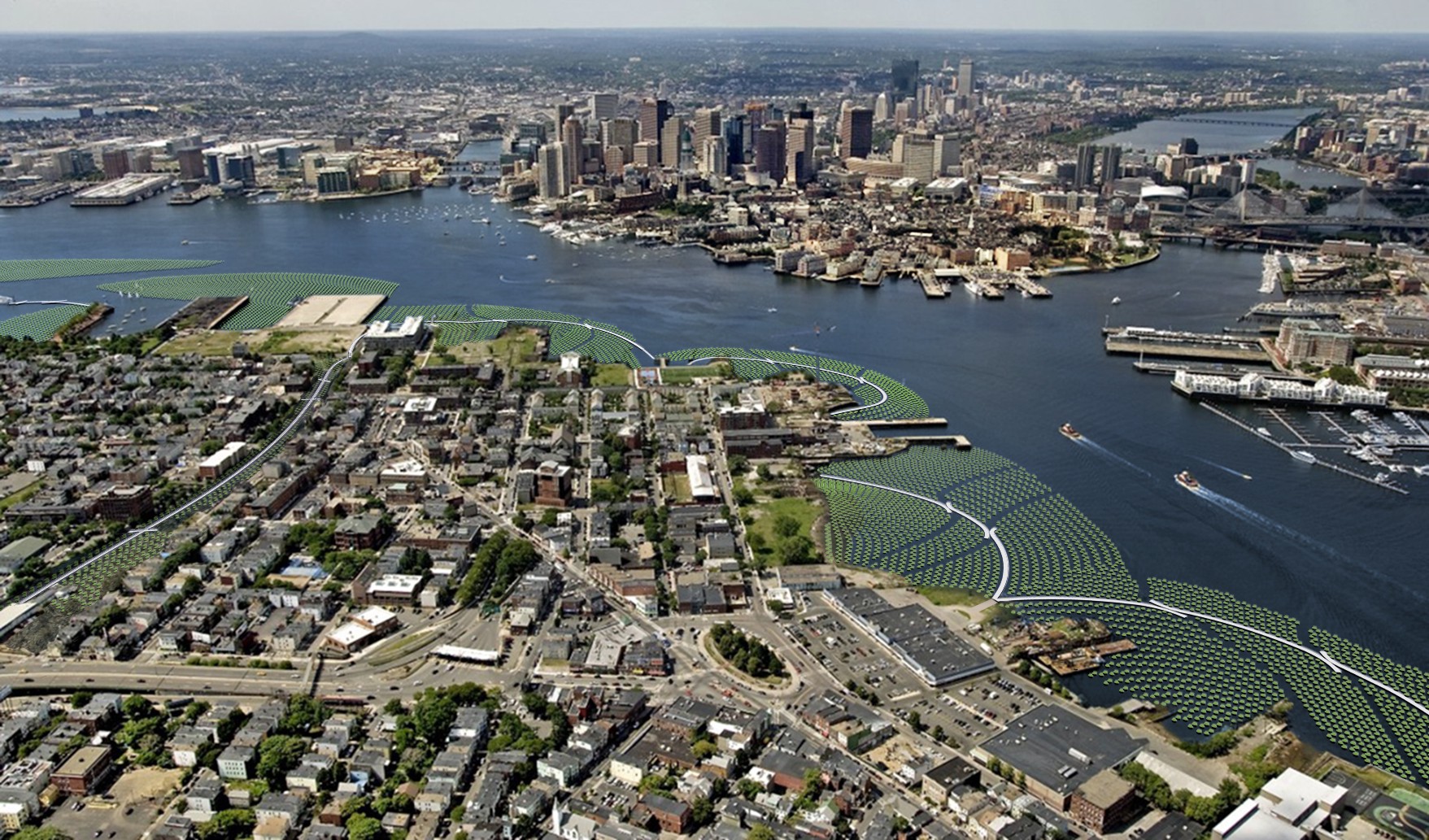 The Emerald Tutu began as a simple idea for a new kind of coastal protection system to address flood risk in Boston—and as a commentary on the urban history of the city. “The spirit of the Emerald Tutu is to reimagine what public infrastructure can do for citizens,” says Gabriel Cira ’08, CEO of The Emerald Tutu, Inc. “To address the true danger of climate change in Boston, we wanted to focus on making infrastructure green, inhabitable, and accessible, rather than reinforcing the division and erasure that Boston’s major infrastructure initiatives of the 20th century brought.” The US National Science Foundation agreed, as they recently announced the award of a $256,000 research grant to help The Emerald Tutu realize its vision.

The Emerald Tutu originated in 2018 as an entry in the MIT Climate Changed ideas competition, part of a symposium that explored transdisciplinary understandings of climate models and their uses in architecture and urban planning. Climate Changed was founded by MIT PhD students Irmak Turan and Jessica Varner, and sponsored by MIT’s Environmental Solutions Initiative, the MIT School of Architecture and Planning, and the Leonardo DiCaprio Foundation; it included lectures, workshops, and demonstrations, but the highlight was a competition seeking models of urban designs that would protect Greater Boston from the effects of climate change in the year 2050. A team of five MIT postdocs and alumni, including Cira, designed the Emerald Tutu for the contest. Their interpretation of Climate Changed’s theme of models was humorous, as the team hired a drag queen to introduce the project and “model” it. But their innovative biomechanical approach to a serious purpose, preventing storm surges and incoming storm waves from flooding the Boston area, was recognized with the top prize in the event.

This was just the first in a series of awards for the Emerald Tutu, which the team members have turned into a nascent business. In 2019, the American Society of Civil Engineers gave The Emerald Tutu its Innovation Award in Sustainable Engineering. Now, the National Science Foundation (NSF) has granted The Emerald Tutu Phase I funding under the Small Business Innovation Research (SBIR) Program, to support 12 months of research, prototyping, simulation, and business development.

“We are absolutely thrilled to receive this SBIR grant from NSF,” says Julia Hopkins ’17, The Emerald Tutu’s lead scientist. “It will enable us to begin significant prototyping operations and study the behavior of actual units in the field. Our extensive computer modeling has been very positive, but we need to be able to playtest these things.”

Deployed in Boston Harbor, the Emerald Tutu would be an interlinking array of fibrous floating mats loaded with biomatter that flank the waterfront areas of the city, reducing surge and waves from threatening storm events that are supercharged by climate change. Individual mats grow to be massive waterlogged units, with semi-aquatic marsh grass above and aquatic seaweeds attached below. As an interconnected system, they absorb and transfer energy through the network, acting to disrupt large incoming waves, and the submerged biomatter impedes the inland rush of atmospheric pressure-driven tides known as storm surge. These factors add up to reduced inland flooding during storms, while creating a unique inhabitable public waterfront amenity during fairer weather. Channels and gaps between units allow navigation by all kinds of seafaring vessels, and The Emerald Tutu can safely avoid shipping lanes for Boston’s active container port and its other big-berth docks.

But the greatest parts of The Emerald Tutu are the materials it does not use. It manages to solve the question of coastal climate resilience in cities without reliance on traditional infrastructure, sometimes known as “gray infrastructure,” made of massive concrete and steel—which are carbon-intensive and do not result in human-friendly environments. Gray infrastructure projects tend to be extremely expensive, and take years to construct, a fact that any Bostonian would attest to after living through the Big Dig. The Emerald Tutu also avoids any onshore modifications, such as berms or ditches, which are impracticable in densely populated urban areas like Boston Harbor. And unlike gray infrastructure solutions such as seawalls or seagates, which have been shown to devastate water ecology, The Emerald Tutu does not block the normal flow of water in and out of the harbor. Instead, it adds back the marsh flora that existed before all the land infill of Boston, and improves water quality through bioremediation and nutrient stabilization. Floating pathways lace through the design, providing a path for people to walk this new landscape, actually a restoration of the old marsh ecology of Boston Harbor.

As The Emerald Tutu is comprised of a simple set of modular parts, meant to be easily deployable, expandable, and reparable over time, the new NSF grant will allow the team to prototype and test those parts. The aim is to create a system that is easily manufacturable and deployable at the quantity needed—thousands of units—and that can withstand conditions of the harbor.

What about the name? What is The Emerald Tutu? “It’s a very Massachusetts joke,” laughs Cira, who also teaches a longstanding Massachusetts College of Art and Design course on the architectural history of Boston. “The name is a riff on Frederick Law Olmsted’s 19th century ‘Emerald Necklace’ urban landscape plan for the green spaces of Boston. To us, the necklace analogy seemed a little bourgeois, a little snooty, a little outdated. So we proposed something softer and cheaper—less serious, more fun. In our opinion, Bostonians should look at all parts of their city’s history and mythology critically at this political moment.”

The Emerald Tutu thinks big about coastal climate resilience for cities. But it also thinks realistically, in terms of cost and environmental impacts. As Boston and many other coastal cities act to prepare for the next climate catastrophe, hard choices will have to be made. And The Emerald Tutu is betting on soft infrastructure at a large scale, a resilience strategy that does not cause more problems than it solves, and one that acts as a benefit rather than a detriment to humans and the many other species of the coastal urban ecosystem.

This article originally appeared on MIT News on September 3, 2020.