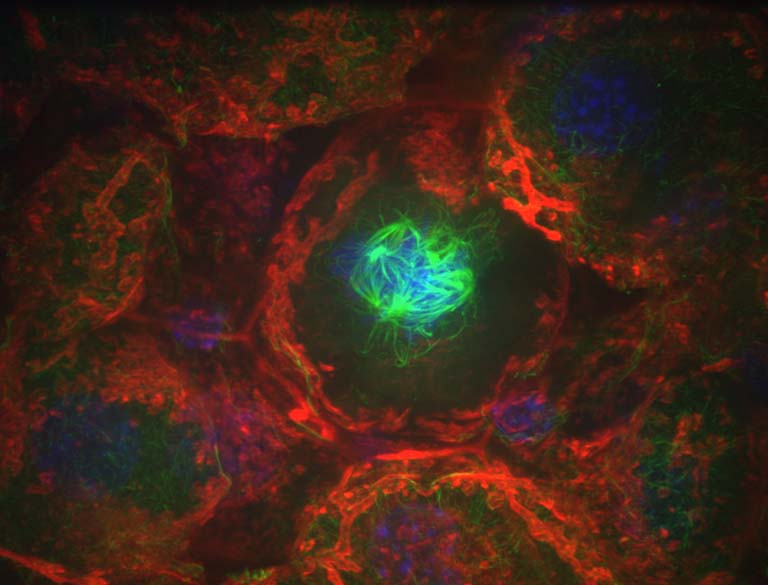 How exactly does a cell divide? “That is a fundamental question that I’ve been interested in ever since I saw my first movie in junior high of dividing cells,” said Angelika Amon, Kathleen and Curtis Marble Professor in Cancer Research and Professor of Biology. “It took my breath away then. It still does.”

Just as breathtaking might be the possibilities opened up by Amon’s work at the Koch Institute for Integrative Cancer Research at MIT. Much of her research has focused on chromosome mis-segregation during mitosis and meiosis, resulting in a condition known as aneuploidy—a hallmark of cancer, as well as a cause of defects or death in fetuses. Aneuploid cells are imbalanced in their genetic information, which causes stress on the cell, slowing down its normal processes. Amon seeks to exploit those weaknesses, enhancing the stresses with drug compounds until the cell dies off, hopefully making way for healthy, normal cells.

Another area of research involves the relationship of gamete formation to the resetting of the cell’s lifespan from one generation to the next. In 2011, Amon and a team of researchers discovered a gene in yeast that appears to control the resetting process, with possible implications in human cell rejuvenation, the creation of pluripotent stem cells, or even the reversal the aging process.

Yet another study last year found that during sexual reproduction, yeast cells build up and then break down amyloid-like structures. Further research could potentially reveal ways to replicate this process in order to break down disease-causing amyloids, which can persist in the brain for decades. Amyloids are most often associated with Alzheimer’s disease, Parkinson’s disease, Huntington’s disease, and rheumatoid arthritis.