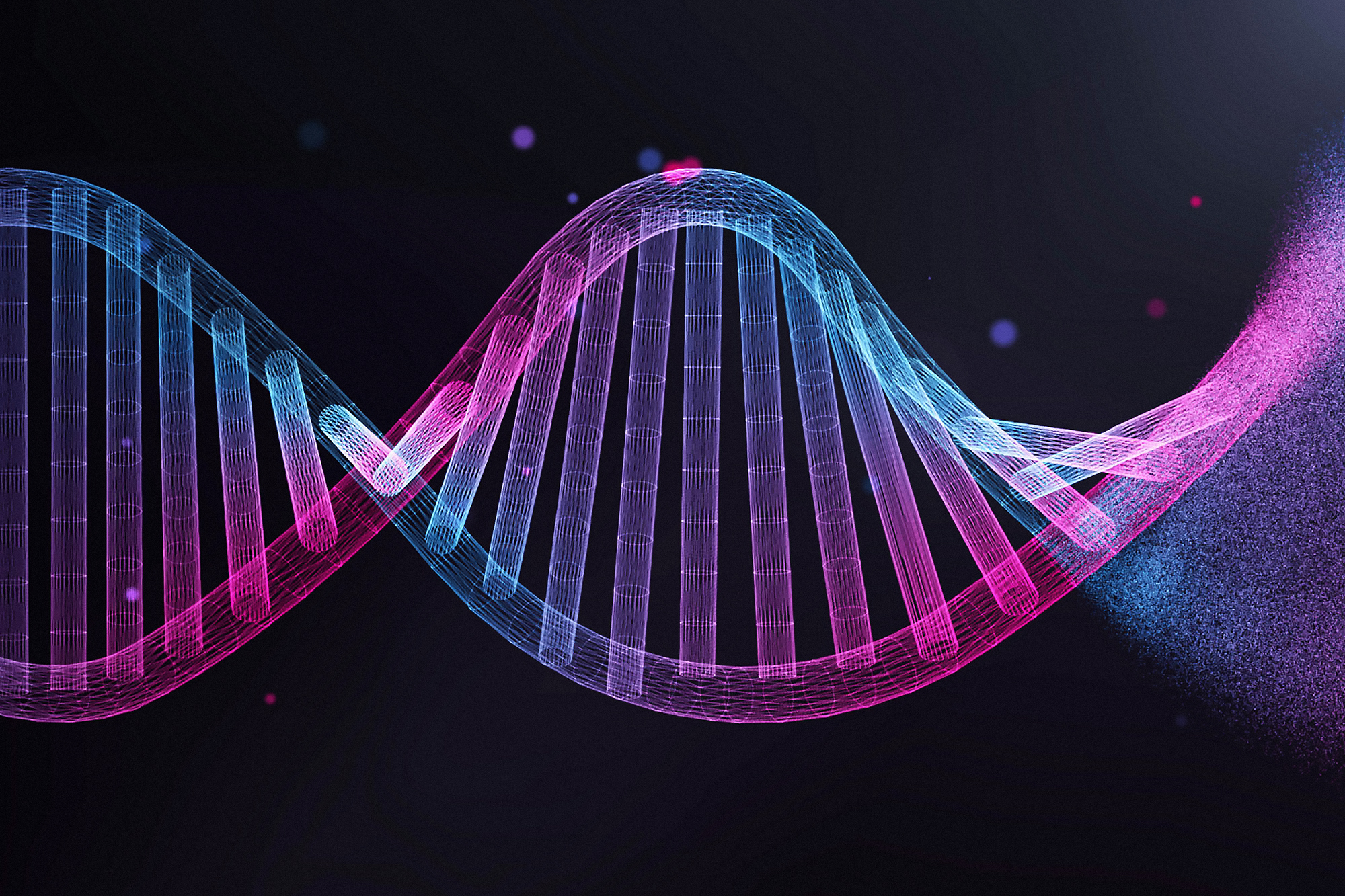 Fundamental scientific research is naturally slow, methodical, and painstaking. The breakthroughs that make headlines are almost never the work of lone individuals but the result of rich collaborations. They are inflection points along a trajectory that begins with basic questions about the world and builds as researchers add new discoveries and insights to the wealth of human knowledge. The Campaign for a Better World prioritized basic research because MIT recognizes that today’s questions determine tomorrow’s answers. The story of MIT’s mRNA research, which led to vaccines for Covid-19, illustrates how such support for discovery science pays off.

Six weeks after the genetic code of SARS-CoV-2 was released, a refrigerated truck carrying vials of an experimental vaccine pulled out of Moderna’s plant in Norwood, Massachusetts.

The basic research that underpinned Moderna’s groundbreaking achievement took decades, but in many ways its origin story starts in May 1977 in a fifth-floor conference room in MIT’s Building E17.

MIT molecular biologist Phillip A. Sharp had uncovered something unexpected about RNA, the molecule that carries DNA’s genetic instructions from the cell nucleus to protein-building machinery in the cytoplasm.

Messenger RNA (mRNA) reads DNA’s instructions like sheet music to assemble and conduct an orchestra of hundreds of thousands of proteins performing different roles in the body.

That day in 1977, Sharp told colleagues that he and his team had found that after DNA was copied into RNA, non-coding sections of RNA were deleted, and what remained was spliced together to create different proteins. At the time, Sharp says, the idea that “pristine genes were split into pieces seemed insane.”

Sharp, today an MIT Institute Professor, the highest faculty honor at MIT, went on to win the Nobel Prize in Physiology or Medicine in 1993 for this discovery, but the implications for human health were apparent long before that. Because diseases are often caused by malfunctioning proteins, if you could reprogram mRNA to express the right proteins, you could, in theory, treat any disease.

The Path to Delivering Therapeutics

Over the following decades, MIT contributed more of the fundamental knowledge that would make Pfizer’s and Moderna’s mRNA-based vaccines for Covid-19 a global success story. But even in the 1970s, Sharp was building on research done a decade earlier by MIT microbial geneticist Salvador Luria and MIT biophysicist Alex Rich on how genetic information was stored, copied, and read.

“Decades before the development of mRNA vaccines, fundamental discoveries about the nature of mRNA made this life-saving advance possible,” Sharp says.

Nobel laureate Luria, Rich, and others focused on RNA’s single-strand copy of the genetic information contained in DNA’s double helix.

RNA turned out to be made up of four nucleotides: the chemical bases adenine (A), cytosine (C), uracil (U), and guanine (G). A, C, U, and G formed three-letter words or codons that code for amino acids, the building blocks of proteins. H. Gobind Khorana, a biochemist on the MIT faculty from 1970 to 2007, received the 1968 Nobel for his work identifying 64 distinct codons for 20 amino acids. Then, using off-the-shelf chemicals, Khorana spent more than a decade synthesizing long chains of nucleic acids to create the first complete, functional artificial gene (for a yeast transfer RNA) in 1972.

Sharp calls Khorana the “untold hero” of artificial genes. Vaccines such as the ones Pfizer and Moderna developed for Covid-19 use synthetic genes to code for proteins, or parts of proteins, that trigger the immune response. “It’s his technology and the people he trained that really gave rise to the ability to synthesize genes. Without that, you would not have mRNA vaccines,” Sharp says.

Uttam RajBhandary, the Lester Wolfe Professor of Molecular Biology at MIT, who had been a postdoctoral associate under Khorana at the University of Wisconsin in the 1960s, explores the structure of transfer RNA, or tRNA, which physically carries an amino acid to the cell’s protein-making machinery. RajBhandary says of Khorana’s and others’ work matching codons to specific amino acids: “It felt as though one of the most important secrets of life had finally been revealed.”

“Decades before the development of mRNA vaccines, fundamental discoveries about the nature of mRNA made this life-saving advance possible,” Sharp says. “Many of these discoveries were celebrated as novel biological insights that we now recognize as essential advances in allowing society to quickly respond to the challenge of SARs-Cov-2.”

Around the time Sharp described RNA splicing for the first time in Building E17 (the antecedent to the Koch Institute for Integrative Cancer Research), biomedical engineer Robert Langer ScD ’74 was working in the lab of the late Harvard cancer researcher Judah Folkman pursuing innovative ways to deliver therapeutics.

To control the body’s orchestra of proteins, and to study fundamental biological mechanisms, researchers needed to artificially introduce large molecules such as proteins and nucleic acids into the body. The problem was that injected protein, RNA, and DNA molecules are rapidly destroyed.

Langer thought, what if you could encapsulate large molecules in tiny bubbles of materials such as noninflammatory polymers? These synthetic materials, he reasoned, could create a protective barrier.

“People were thinking that it wasn’t possible,” says Langer, the David H. Koch Institute Professor, who would go on to innovate drug-delivery technology with more than 1,400 issued and pending drug and medical device patents. “The molecules are so big, how could they get through anything?” He recalls that for two years, he tried hundreds of methods.

Finally, in 1976, Folkman and Langer showed that these tiny particles could deliver virtually any macromolecule to targeted tissues and organs more effectively than intravenous or oral means. “Among the macromolecules we studied in the paper [in Nature] was DNA. That was the first time a nucleic acid was ever encapsulated in a tiny particle and used for delivery,” Langer says.

More than three decades later, in 2010, Langer and others (including entrepreneur Noubar Afeyan PhD ’87) who recognized the exciting potential to generate and introduce beneficial proteins into the body to treat diseases cofounded Moderna. Afeyan is chairman of Moderna and Langer is a member of Moderna’s board of directors and scientific advisory board.

Meanwhile, MIT contributions continued to move the research forward. Langer and Daniel Anderson, a professor of chemical engineering and a member of the Koch Institute and MIT’s Institute for Medical Engineering and Science, developed lipid nanoparticles that allow mRNA to travel from the point of injection and reach the protein-making machinery within cells. Langer also showed that adding the synthetic food additive polyethylene glycol (PEG) to the nanoparticles’ surface helped mRNA survive long enough to deliver its message. Both the Moderna and Pfizer mRNA vaccines are carried through the body by lipid nanoparticles coated with PEG.

“People seem to think that Covid-19 was the first vaccine in the pipeline; it was the ninth,” Langer says. “And there’s more to come. I don’t think there’s any disease that’s off-limits.”

With the help of PEG and nanoparticles, designer mRNA is able to deliver the blueprint of the coronavirus’ signature spike protein. The mRNA subsequently breaks down in the body, but it has provided the immune system with the means to recognize and attack the spike protein if it ever encounters it, potentially preventing millions of Covid-19-related deaths. This is an example, Langer notes, of how basic research can lead to therapies that change the world. “For years, I studied basic cancer biology, basic materials science, and engineering,” he says. “I certainly never imagined that the research would lead to all the new therapies—including mRNA—that it has today.”

The Covid-19 vaccines that rolled out the door in Norwood have helped to turn the tide of the global pandemic. The way Sharp sees it, though, vaccines are the tip of the iceberg. Future RNA-based therapies, he says, could be almost limitless. Messenger RNA vaccines are in clinical trials for a variety of conditions: cytomegalovirus, the leading infectious cause of birth defects in the United States; influenza, HIV, Zika, and Ebola; as well as genetic diseases, heart disease, and cancer. You could, Sharp says, introduce mRNA into cancer cells to activate the body’s immune system to attack that type of cell anywhere in the body.

“People seem to think that Covid-19 was the first vaccine in the pipeline; it was the ninth,” Langer says. “All kinds of vaccines—for rare diseases, cancer, infectious disease—are being done by Moderna right now in trials. And there’s more to come. I don’t think there’s any disease that’s off-limits.”