With the HUMANS Project, a Message That Space is For Everyone 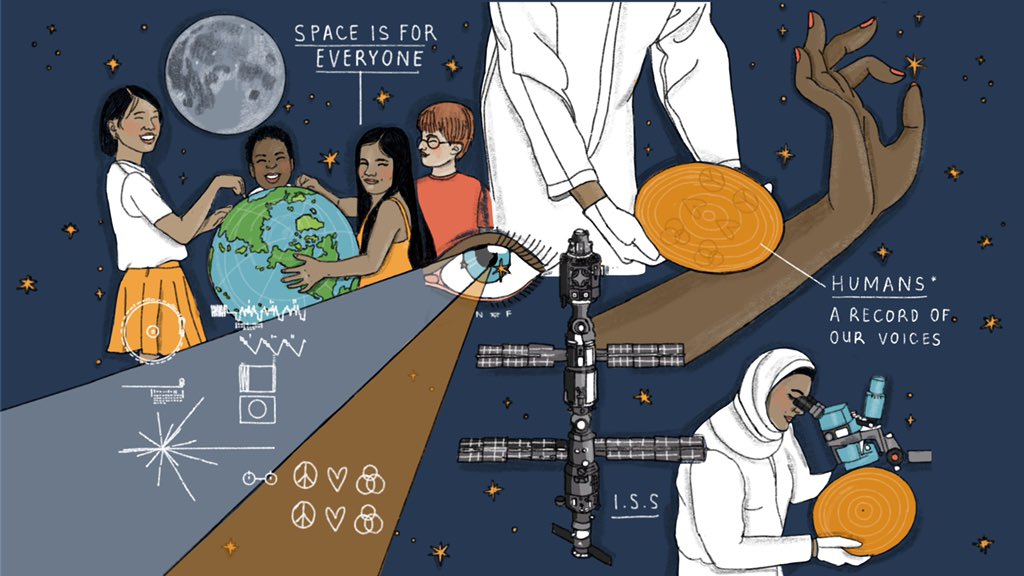 When the Voyager 1 and Voyager 2 spacecraft launched in 1977, they each carried a Golden Record, a special project spearheaded by astrophysicist Carl Sagan, in addition to the scientific instruments necessary for their mission to explore the outer reaches of our solar system. Part time capsule, part symbolic ambassador of goodwill, the Golden Record comprises sounds, images, music, and greetings in 59 languages, providing a snapshot of life on Earth for the edification of any intelligent extraterrestrial beings the spacecraft might encounter.

Today, while Voyager 1 and 2 hurtle on through interstellar space more than 14 billion and 12 billion miles away, respectively, the Golden Record and the iconic etching on its cover has inspired a new student-run initiative, the Humanity United with MIT Art and Nanotechnology in Space (HUMANS) project, which aims to send a message that hits a little closer to home: that space is for everyone.

“We want to invite the world to submit a message to our project website — either text or audio, or both! — sharing what space means to them and to humanity in their native languages,” says project co-founder Maya Nasr, a graduate student in the Department of Aeronautics and Astronautics. “Our goal is to use art and nanotechnology to create a symbol of unity that promotes global representation in space and brings awareness to the need for expanded access to the space sector worldwide.”

Nasr and her fellow HUMANS project co-founder Lihui Lydia Zhang ’21, a graduate of MIT’s Technology Policy Program, are collecting submissions this summer into the fall semester via a submission portal on their website, humans.mit.edu. Taking inspiration from One.MIT, a project to etch more than 270,000 names from the MIT community on a 6-inch wafer, they have partnered with MIT.nano to etch both text and audio waveforms onto a 6-inch disk.

Finally, in collaboration with the Space Exploration Initiative (SEI) at the MIT Media Lab, this new “record of our voices” will travel to the International Space Station (ISS) on a future mission.

For both Nasr and Zhang, the philosophy “space for all” is personal. The two bonded over their shared experience as international students whose own passion for space brought them to MIT: Nasr grew up in Lebanon, while Zhang grew up in China. In their journeys in the space sector, they have both faced constant challenges and struggles that limited them from fully contributing their learning and passion.

These challenges generated a shared frustration, but more importantly, a vision that space should be more accessible and representative for more people around the world. As classmates in 16.891 (Space Policy Seminar) with Professor Dava Newman, they came across an open call for proposals for developing suborbital and ISS payloads from the SEI. Nasr and Zhang put their heads together to create their proposal for the HUMANS project.

“The International Space Station is one of the few avenues that represents international cooperation in space, but there are still so many countries around the world that aren’t included in that representation,” says Zhang. “The HUMANS project won’t solve this problem, but we hope it will be a small step forward to help us advocate for expanding global access to space.”

In addition to Nasr and Zhang, HUMANS project collaborators include faculty advisor Jeffrey Hoffman, professor of the practice in aeronautics and astronautics; advisor Ariel Ekblaw, director of SEI; website developer and rising senior Claire Cheng; Xin Lu and Sean Auffinger from SEI; Professor Craig Carter from the Department of Materials Science and Engineering (DMSE); and Georgios Varnavides, a graduate student in DMSE.

To participate in the HUMANS project, visit humans.mit.edu to submit a text and/or audio message. Messages must follow project guidelines to be included on the final disk that will be sent into space.

This article was written by Sara Cody from the Department of Aeronautics and Astronautics and originally appeared on MIT News on July 20, 2021. The illustration is by Nourie Flayhan.

Basic Research Reinventing Education School of Engineering
Give to MIT