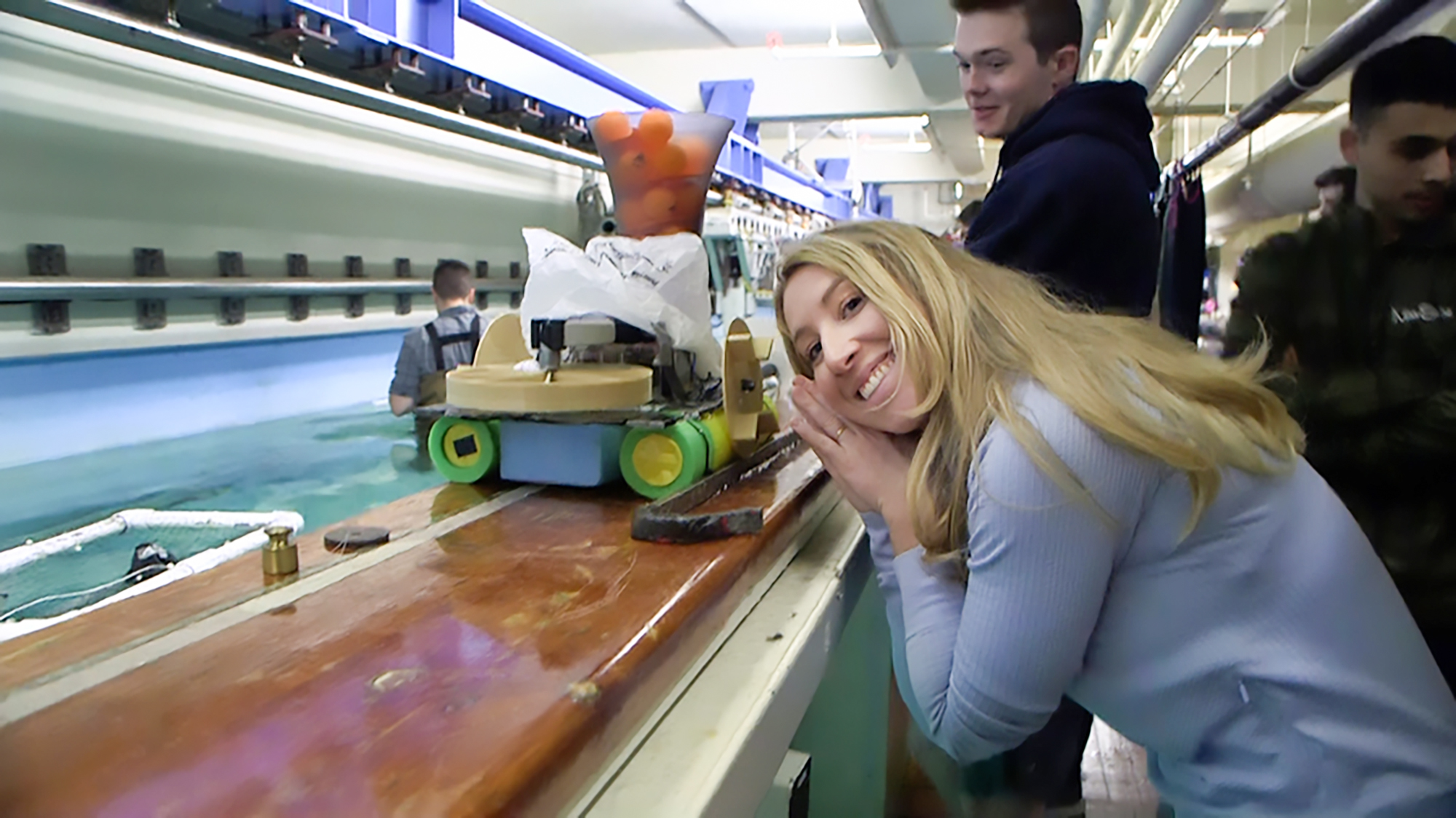 Since 1901, MIT has offered a graduate program unlike any other at the Institute. The Naval Construction and Engineering program in the Department of Mechanical Engineering educates active duty officers in the US Navy, US Coast Guard, and foreign navies. Every year, the US Navy chooses 10 officers to enroll in the program, which is often referred to as Course 2N.

“This is a valuable relationship, both from MIT’s perspective and the Navy’s perspective. We have access to the greatest engineering school in the world with a level of expertise that just doesn’t exist anywhere else. It brings a technical rigor and competence to our naval officers that just can’t be matched anywhere else,” says Commander Douglas Jonart Eng ’14, SM ’14, PhD ’16, associate professor of the practice at MIT and Course 2N instructor.

In addition to earning a master’s degree in Naval Architecture and Marine Engineering or a Naval Engineer degree, students often earn an additional master’s degree in a relevant field such as mechanical engineering, civil engineering, or nuclear engineering.The Course 2N curriculum is structured around a sequence of courses known as the “2.70X series.” In their first semester at MIT, students take 2.701 (Principles of Naval Architecture), which offers an introduction to topics such as ship geometry, hull structure, and ship resistance. The following semester, students enroll in 2.702 (Systems Engineering and Naval Ship Design).

“The main takeaway for 2.702 is to break away from the pure engineering aspect of shipbuilding and design, and start to focus on skills like team building, project management, cost estimates, and developing metrics,”

says Captain Jeremy Leghorn Eng ’09, SM ’09, professor of the practice and one of the course’s instructors, alongside Jonart.

Jonart and Leghorn introduce students to topics ranging from systems engineering to understanding the needs of stakeholders and translating those needs into a design. Students are tasked with putting these principles into practice during a semester-long design project that culminates with an exercise in the MIT Towing Tank.

Putting vessel designs to the test

Students in 2.702 are divided into teams to work on a simplified design project for a surface ship vessel. With a budget of just $75, students buy materials to construct a remote-controlled vessel within an initial set of design parameters. The vessels must have the ability to complete a series of tasks in the MIT Towing Tank at the end of the semester.

“With the design project, we really want students to see how the decisions they make early in a project can affect them later, what the ramifications are, and how they have to recover—those are important lessons to learn when you manage big projects,” adds Jonart.

For many students, the project is the first time they will get to roll up their sleeves and build something at MIT.

“The class was great because it was one of the first times I got to do a lot of hands-on stuff and I learned a great deal from it. It takes students through the whole life cycle of a ship, which is the root of systems engineering,” says student Thinh Hoang, a lieutenant in the US Navy.

The project also enables students to play around with their creativity. This past semester, the vessels included a paddle-driven boat and a boat powered by a remote control system taken from a toy.

For the main event, the entire class gathers as each vessel is put to the test in the MIT Towing Tank, a 100-foot long tank complete with a wave maker.

In addition to basic parameters for buoyancy, the hull, and propulsion, each vessel is challenged with completing tasks that represent the anti-submarine, anti-surface, and anti-land warfare capabilities that would be standard on any real naval ship. Vessels aim golf balls at a small circle on the tow floor or launch ping-pong balls into floating hoops, meant to represent surface and land targets.

On test day, the Towing Tank is buzzing with activity and excitement. Students cheer each other on, and there’s an air of friendly competition as each vessel completes the required tasks.

According to Jonart, something inevitably will not perform as expected on test day, forcing teams to scramble and problem solve.

“It’s really nice to see the projects come together, put them in the Towing Tank, have something go terribly wrong, and see these engineers figure out how to fix it,” Jonart says.

Hoang and his team ran into one such problem when the shaft fell off their motor. They quickly swung into action and managed to duct tape a backup propulsion system to their boat.

“One of the big takeaways for me is that what you plan initially can fall apart really quickly. It showed us how important it is to be cognizant of decisions early on that can affect your project overall,” says Hoang.

This ability to anticipate problems, troubleshoot, and quickly come up with a solution is something naval officers are familiar with.

“One thing you’ll learn in the Navy, is things never go as planned. You can prepare a plan, but when it doesn’t go the way that you want it to go, you have to be able to be flexible,” adds Lieutenant Asia Allison, a Course 2N student.

At the end of 2.702, students are able to apply the underlying concepts of systems engineering to make informed decisions in uncertain environments. The rest of the “2.70X” series covers naval ship design and naval ship conversion. The 2N curriculum culminates in 2.705 (Projects in New Concept Naval Ship Design), a year-long original design project.

Upon graduating from the Course 2N program, many graduates will go on a “qualification tour” within the US Navy, where they hone their skills and focus on a specific area of expertise.

Oftentimes, students will move on to program manager roles within the US Navy. In particular, they frequently manage acquisition programs. According to Leghorn, today’s Course 2N students could someday be responsible for future aircraft carriers or submarine programs.

“It’s amazing to think that our students will be involved in the procurement of an aircraft carrier that could have a 50-year life cycle,” adds Leghorn.

Captain Leghorn credits the 2N program, and courses like 2.702, for equipping students with the confidence needed to succeed in naval acquisition programs.

“The program here at MIT gives students the confidence to communicate with engineers within the Navy chain of command. They have that technical competence that allows them to be very effective leaders within our Navy programs,” he says. “This MIT educational program is the building block for the rest of those Navy officers’ careers.”

This story was originally written by Mary Beth Gallagher and published in MIT News on December 9, 2022. Photo courtesy of Lauren Futami.