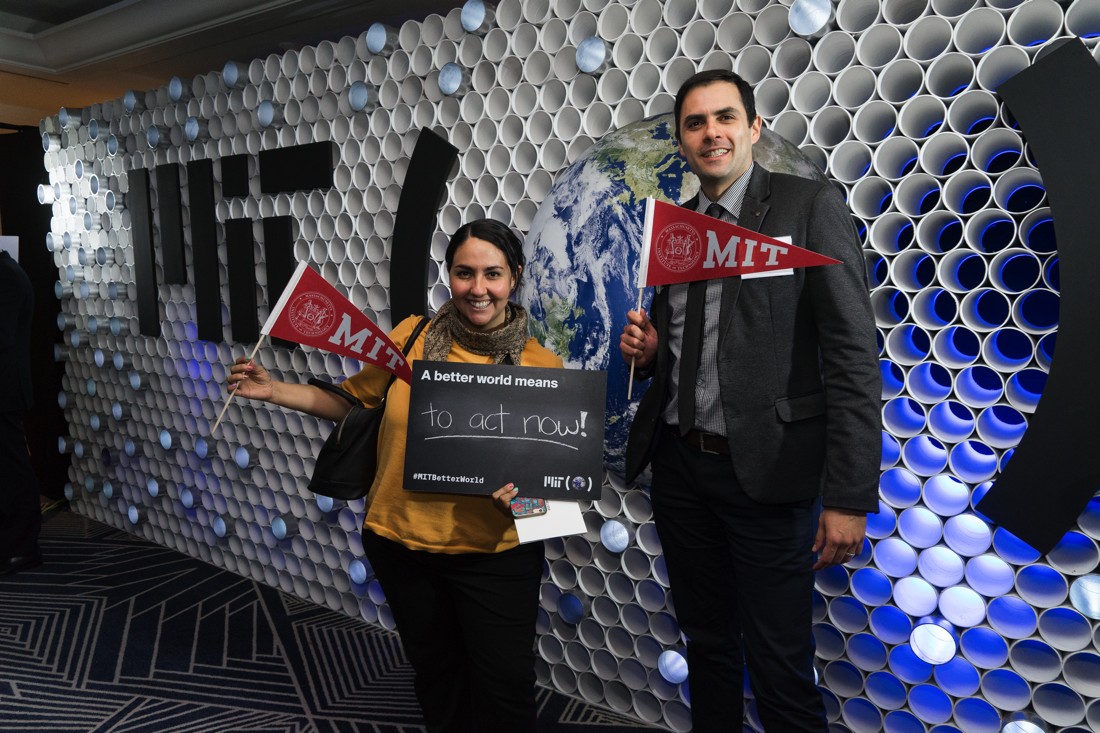 The MIT Better World tour celebrated with more than 275 guests in Mexico City’s Four Seasons Hotel on March 23. The evening featured MIT alumni who have garnered international acclaim for their work, as well as rising stars from the faculty and student body. Venezuelan-born President L. Rafael Reif, speaking in his native Spanish, celebrated the deep connections between MIT and Mexico and shared a preview of the faculty and student speakers who would later share highlights of their work in innovative urban planning, disaster preparedness and community resilience in a time of global change, and groundbreaking satellite technologies. He underscored how their work reflects the three pillars of the MIT Campaign for a Better World—education, research, and innovation—all key for making a better world.

World-renowned cellist and MIT alumnus Carlos Prieto ’58 opened the program with a performance of the Bourrée from Suite No. 3 in C major by J. S. Bach. Prieto, who played first cello in the MIT Symphony Orchestra, earned an engineering degree and rose to become head of an iron and steel company in Mexico before returning to the cello. His artistic honors include the Order of Civil Merit from the King of Spain, and Mexico’s National Prize for Arts and Sciences. Next to speak was Pedro Aspe PhD ’78, who served as secretary of the treasury of Mexico and has played a central role in structural reforms such as NAFTA that have shaped modern Mexico. Aspe spoke of his enduring gratitude for MIT, where he earned a doctorate in economics, as well as his excitement about the MIT Better World campaign.

Carlos A. Sainz Caccia of Guadalajara, Mexico, gave remarks in both English and Spanish. Sainz is a master’s candidate in urban studies and planning at MIT, where he studies the intersections of public space, urban design, and public transit. He compared MIT’s Infinite Corridor to the Paseo de La Reforma in Mexico City, observing that each thoroughfare strengthens its environment by increasing connectivity: “The Infinite Corridor is a manifestation of what we do at MIT,” he said. “Crossing through buildings and through disciplines. I want to build cities this way.”

Assistant Professor Miho Mazereeuw’s work in emergency response planning has also benefited from the collaborative culture of MIT. In 1995, an earthquake struck her family’s home city of Kobe, Japan, causing loss of life and major disruption. She has since established MIT’s Urban Risk Lab where she is developing the Emergency Preparedness Hub to support effective community action following a disaster. Like Sainz, she identifies the connectivity at MIT as an essential asset: “I came to MIT because the work I do requires a community of people from many disciplines who are willing to collaborate and find solutions to complex problems that affect real people.”

Paulo Lozano SM ’98, PhD ’03, associate professor of aeronautics and astronautics, also studies space, albeit of a different kind and scale. As director of MIT’s Space Propulsion Laboratory, he is developing a new generation of tiny satellites powered by cutting-edge micropropulsion systems. As a child in Mexico City, he dreamt of space exploration, and remains inspired by its vast opportunities. Lozano spoke of MIT’s capacity to help realize “the democratization of space” by creating technologies that draw more ideas and creative individuals into the field. “At MIT,” he said, “this sense of democracy is visible everywhere; it is at the heart of our culture, and it drives our work.” Lozano was recently appointed faculty director of MIT-Mexico, part of the MIT International Science and Technology Initiatives, which provides MIT students with hands-on, international learning opportunities.

President Reif concluded the program with thanks to all the speakers for their inspiration, and the active MIT community in Mexico City. He shared his vision for the MIT Campaign for a Better World and its three pillars, and reminded the audience that while the exciting future described by the evening’s speakers is quite possible, MIT needs “enthusiastic partners who share our vision” to realize those opportunities. “We invite you to join us in inventing the future,” he said.

This article originally appeared on MIT News on April 12, 2017.