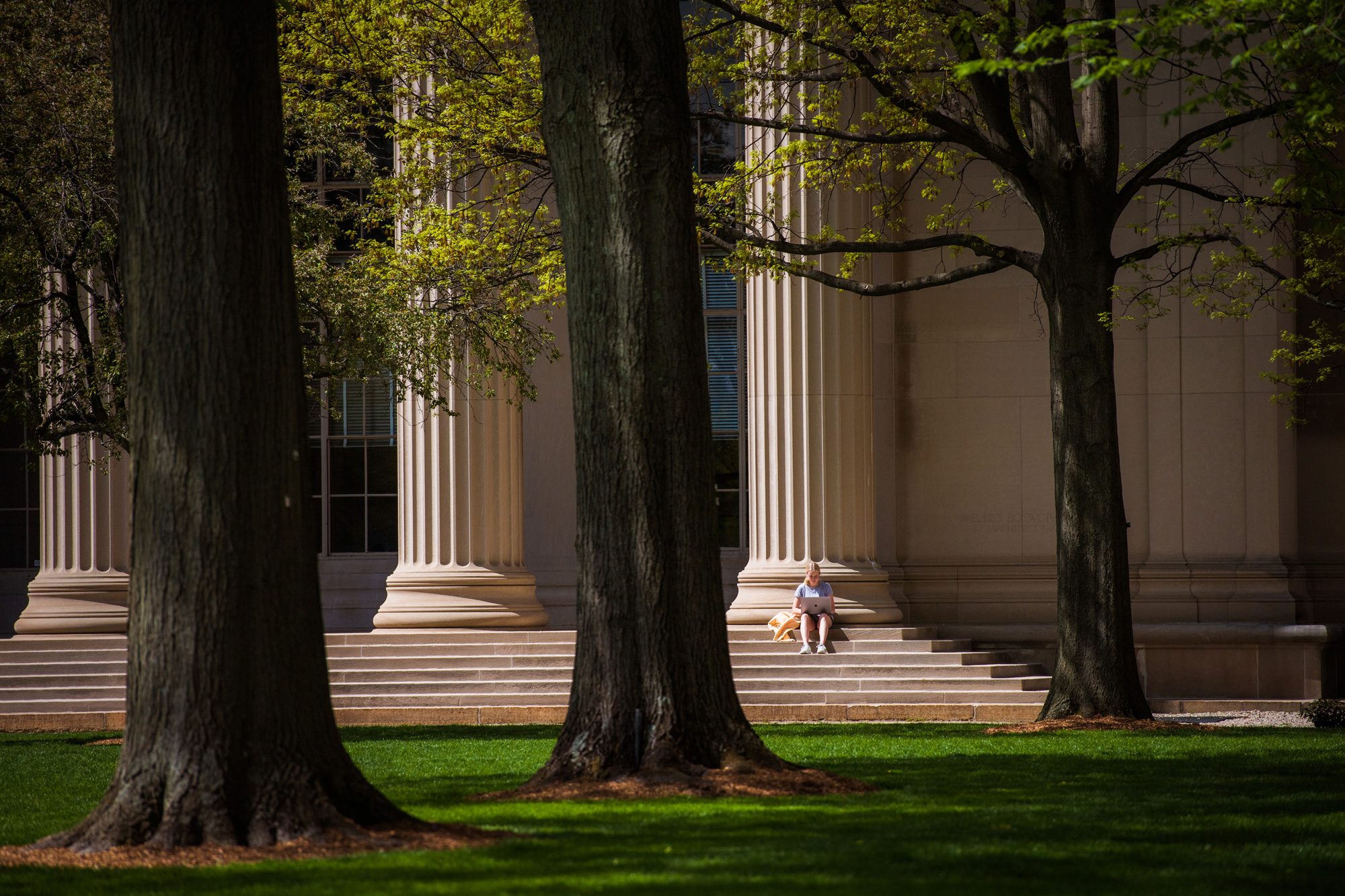 Under its “Fast Forward” climate action plan, which was announced in May 2021, MIT has set a goal of eliminating direct emissions from its campus by 2050. An important near-term milestone will be achieving net-zero emissions by 2026. Many other colleges and universities have set similar targets. What does it take to achieve such a dramatic reduction?

Since 2014, when MIT launched a five-year plan for action on climate change, net campus emissions have been cut by 20%. To meet the 2026 target, and ultimately achieve zero direct emissions by 2050, the Institute is making its campus buildings dramatically more energy efficient, transitioning to electric vehicles (EVs), and enabling large-scale renewable energy projects, among other strategies.

“This is an ‘all-in’ moment for MIT, and we’re taking comprehensive steps to address our carbon footprint,” says Glen Shor, executive vice president and treasurer. “Reducing our emissions to zero will be challenging, but it’s the right aspiration.”

“As an energy-intensive campus in an urban setting, our ability to achieve this goal will, in part, depend on the capacity of the local power grid to support the electrification of buildings and transportation, and how ‘green’ that grid electricity will become over time,” says Joe Higgins, MIT’s vice president for campus services and stewardship. “It will also require breakthrough technology improvements and new public policies to drive their adoption. Many of those tech breakthroughs are being developed by our own faculty, and our teams are planning scenarios in anticipation of their arrival.”

Working toward an energy-efficient campus

The on-campus reductions have come primarily from a major upgrade to MIT’s Central Utilities Plant, which provides electricity, heating, and cooling for about 80% of all Institute buildings. The upgraded plant, which uses advanced cogeneration technology, became fully operational at the end of 2021 and is meeting campus energy needs at greater efficiency and lower carbon intensity (on average 15% to 25% cleaner) compared to the regional electricity grid. Carbon reductions from the increased efficiency provided by the enhanced plant are projected to counter the added greenhouse gas emissions caused by recently completed and planned construction and operation of new buildings on campus, especially energy-intensive laboratory buildings.

Energy from the plant is delivered to campus buildings through MIT’s district energy system, a network of underground pipes and power lines providing electricity, heating, and air conditioning. With this adaptable system, MIT can introduce new technologies as they become available to increase the system’s energy efficiency. The system enables MIT to export power when the regional grid is under stress and to import electricity from the power grid as it becomes cleaner, likely over the next decade as the availability of offshore wind and renewable resources increases. “At the same time, we are reviewing additional technology options such as industrial-scale heat pumps, thermal batteries, geothermal exchange, microreactors, bio-based fuels, and green hydrogen produced from renewable energy,” Higgins says.

Along with upgrades to the plant, MIT is gradually converting existing steam-based heating systems into more efficient hot-water systems. This long-term project to lower campus emissions requires replacing the vast network of existing steam pipes and infrastructure, and will be phased in as systems need to be replaced. Currently, MIT has four buildings that are on a hot-water system, with five more buildings transitioning to hot water by the fall of 2022.

Minimizing emissions by implementing meaningful building efficiency standards has been an ongoing strategy in MIT’s climate mitigation efforts. In 2016, MIT made a commitment that all new campus construction and major renovation projects must earn at least Leadership in Energy and Environmental Design (LEED) Gold certification. To date, 24 spaces and buildings at MIT have earned a LEED designation, a performance-based rating system of a building’s environmental attributes associated with its design, construction, operations, and management.

Current efficiency efforts focus on reducing energy in the 20 buildings that account for more than 50% of MIT’s energy usage. One such project under construction aims to improve energy efficiency in Building 46, which houses the Department of Brain and Cognitive Sciences and The Picower Institute for Learning and Memory and is the biggest energy user on the campus because of its large size and high concentration of lab spaces. Interventions include optimizing ventilation systems that will significantly reduce energy use while improving occupant comfort, and working with labs to implement programs such as fume hood hibernation and equipment adjustments. For example, raising ultralow freezer set points by 10 degrees can reduce their energy consumption by as much as 40%. Together, these measures are projected to yield a 35% reduction in emissions for Building 46, which would contribute to reducing campus-level emissions by 2%.

Over the past decade, in addition to whole building intervention programs, the campus has taken targeted measures in over 100 campus buildings to add building insulation, replace old, inefficient windows, transition to energy-efficient lighting and mechanical systems, optimize lab ventilation systems, and install solar panels on solar-ready rooftops on campus—and will increase the capacity of renewable energy installations on campus by a minimum of 400% by 2026. These smaller scale contributions to overall emissions reductions are essential steps in a comprehensive campus effort.

Electrification of buildings and vehicles

With an eye to designing for “the next energy era,” says Higgins, MIT is looking to large-scale electrification of its buildings and district energy systems to reduce building use-associated emissions. Currently under renovation, the Metropolitan Storage Warehouse, which will house the MIT School of Architecture and Planning (SA+P) and the newly established MIT Morningside Academy for Design, will be the first building on campus to undergo this transformation by using electric heat pumps as its main heating and supplemental cooling source. The project team, consisting of campus engineering and construction teams as well as the designers, is working with SA+P faculty to design this innovative electrification project. The solution will move excess heat from the district energy infrastructure and nearby facilities to supply the heat pump system, creating a solution that uses less energy, resulting in fewer carbon emissions.

Next to building energy use, emissions from on-campus vehicles are a key target for reduction; one of the goals in the “Fast Forward” plan is the electrification of on-campus vehicles. This includes the expansion of electric vehicle charging stations, and work has begun on the promised 200% expansion of the number of stations on campus, from 120 to 360. Sites are being evaluated to make sure that all members of the MIT community have easy access to these facilities.

The electrification also includes working toward replacing existing MIT-owned vehicles, from shuttle buses and vans to pickup trucks and passenger cars, as well as grounds maintenance equipment. Shu Yang Zhang, a junior in the Department of Materials Science and Engineering, is part of an Office of Sustainability student research team that carried out an evaluation of the options available for each type of vehicle and compared both their lifecycle costs and emissions.

Zhang says the team examined “the specifics of the vehicles that we own, looking at key measures such as fuel economy and cargo capacity,” and determined what alternatives exist in each category. The team carried out a study of the costs for replacing existing vehicles with EVs on the market now, versus buying new gas vehicles or leaving the existing ones in place. They produced a set of specific recommendations about fleet vehicle replacement and charging infrastructure installation on campus that supports both commuters and an MIT EV fleet in the future. According to their estimates, Zhang says, “the costs should be not drastically different” in the long run for the new electric vehicles.

While a panoply of measures has contributed to the successful offsetting of emissions so far, the biggest single contributor was MIT’s creation of an innovative, collaborative power purchase agreement (PPA) that enabled the construction of a large solar farm in North Carolina, which in turn contributed to the early retirement of a large coal-fired power plant in that region. MIT is committed to buying 73% of the power generated by the new facility, which is equivalent to approximately 40% of the Institute’s electricity use.

That PPA, which was a collaboration between three institutions, provided a template that has already been emulated by other institutions, in many cases enabling smaller organizations to take part in such a plan and achieve greater offsets of their carbon emissions than might have been possible acting on their own. Now, MIT is actively pursuing new, larger variations on that plan, which may include a wider variety of organizational participants, perhaps including local governments as well as institutions and nonprofits. The hope is that, as was the case with the original PPA, such collaborations could provide a model that other institutions and organizations may adopt as well.

Strategic portfolio agreements like the PPA will help achieve net zero emissions on campus while accelerating the decarbonization of regional electricity grids—a transformation critical to achieving net zero emissions, alongside all the work that continues to reduce the direct emissions from the campus itself.

“PPAs play an important role in MIT’s net zero strategy and have an immediate and significant impact in decarbonization of regional power grids by enabling renewable energy projects,” says Paul L. Joskow, the Elizabeth and James Killian Professor of Economics. “Many well-known US companies and organizations that are seeking to enable and purchase CO2-free electricity have turned to long-term PPAs selected through a competitive procurement process to help to meet their voluntary internal decarbonization commitments. While there are still challenges regarding organizational procurements—including proper carbon emissions mitigation accounting, optimal contract design, and efficient integration into wholesale electricity markets—we are optimistic that MIT’s efforts and partnerships will contribute to resolving some of these issues.”

MIT’s examination of emissions is not limited to the campus itself but also the indirect sources associated with the Institute’s operations, research, and education. Of these indirect emissions, the three major ones are business travel, purchased goods and services, and construction of buildings, which are collectively larger than the total direct emissions from campus.

The strategic sourcing team in the Office of the Vice President for Finance has been working to develop opportunities and guidelines for making it easier to purchase sustainable products, for everything from office paper to electronics to lab equipment. Jeremy Gregory, executive director of MIT’s Climate and Sustainability Consortium, notes that MIT’s characteristic independent spirit resists placing limits on what products researchers can buy, but, he says, “we have opportunities to centralize some of our efforts and empower our community to choose low-impact alternatives when making procurement decisions.”

The process of identifying and implementing MIT’s carbon reductions will be supported, in part, by the Carbon Footprint Working Group, which was launched by the Climate Nucleus, a new body MIT created to manage the implementation of the “Fast Forward” climate plan. The nucleus includes a broad representation from MIT’s departments, labs, and centers that are working on climate change issues. “We’ve created this internal structure in an effort to integrate operational expertise with faculty and student research innovations,” says Director of Sustainability Julie Newman.

Whatever measures end up being adopted to reduce energy and associated emissions, their results will be made available continuously to members of the MIT community in real-time, through a campus data gateway, Newman says, a degree of transparency that is exceptional in higher education. “If you’re interested in supporting all these efforts and following this,” she says, “you can track the progress via Energize MIT,” a set of online visualizations that display various measures of MIT’s energy usage and greenhouse gas emissions over time.

This story was originally written by David Chandler and published in MIT News on September 12, 2022. Photo courtesy of Gretchen Ertl.

Health of the Planet
Give to MIT