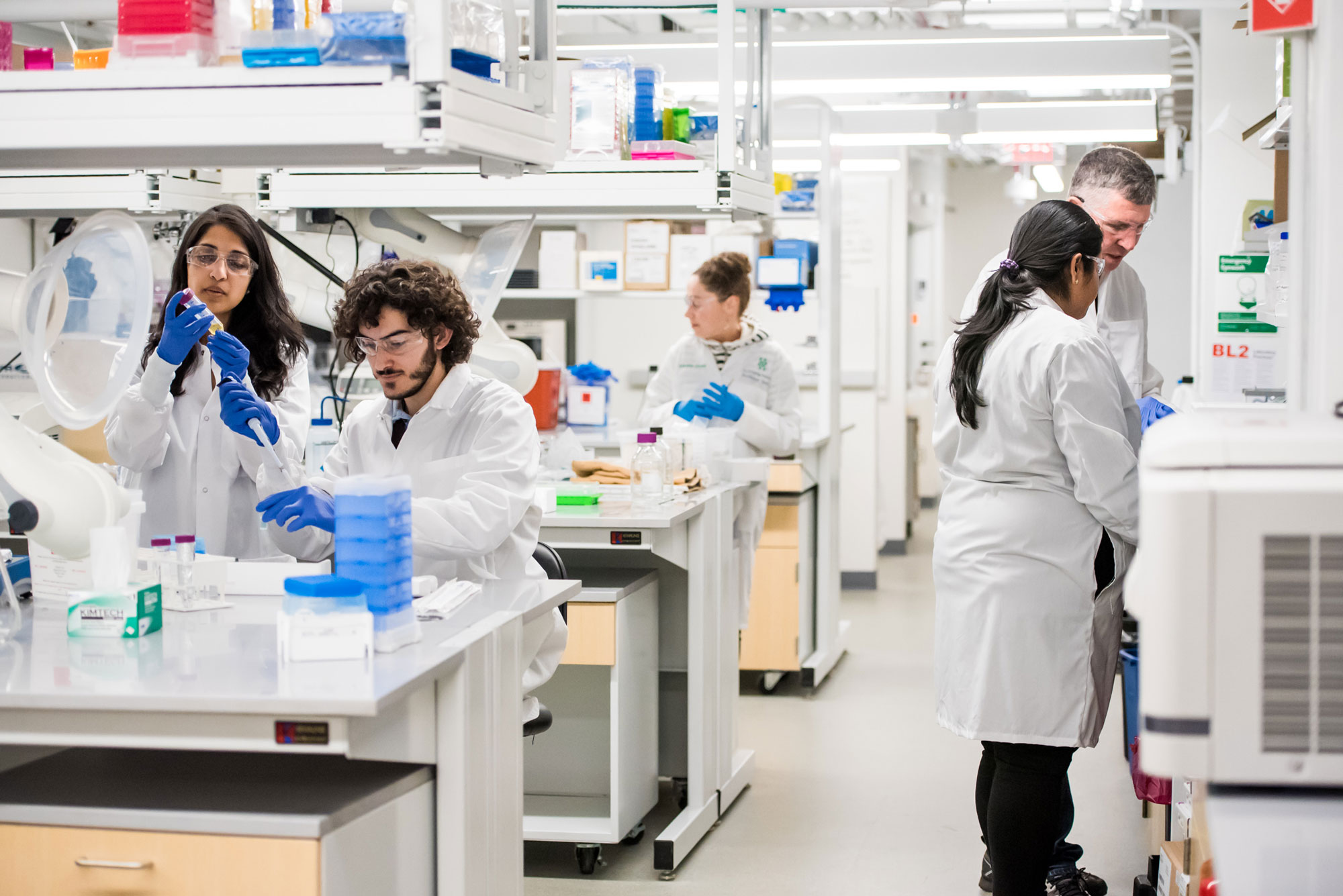 With a long tradition of hands-on learning, MIT is home to many makerspaces, and the Huang-Hobbs BioMaker Space in Building 26 is one of the newest. Completed in early 2020, the biological engineering and chemical engineering makerspace was the brainchild of “a few exceptionally motivated undergraduates who were ready to charge forward with their own ideas,” says BioMaker space manager Justin Buck PhD ’12. “Some of them wanted to start companies, needed research space to make that happen, and weren’t going to take no for an answer.”

These students, organized under the banner of the MIT BioMakers group, saw the need for an independent lab where they could pursue projects outside of the curricular setting without having to work around teaching schedules. “In the past,” explains Buck, “students with a big idea that they were hoping to explore or commercialize either had to go elsewhere to conduct their research or find a professor willing to adopt the project.”

A makerspace conceived by students

“There has never been a lab space at MIT with the sole purpose of enabling students to carry out independent project proposals in the life sciences,” says Oliver Dodd ’17, one of the founders of the MIT BioMakers group. “When we first started the group, the level of interest from students was striking. For me, it allowed me to carry out research I had been sitting on for years.” Dodd was interested in novel platelet-based cell therapies and went on to cofound a preclinical-stage biotechnology company.

Responding to student demand, the biological engineering and chemical engineering departments decided to partner in the creation of a new makerspace. With lessons learned from MIT’s Project Manus, which has established other student-run makerspaces on campus and built maker communities around these spaces, the departments forged ahead.

Donors Pearl Huang ’80 and Peter Hobbs ’76, SM ’81, PhD ’85, who both have had highly successful careers in the pharmaceutical and chemical industries, were inspired by this project, which unites their MIT majors, chemical engineering and biological engineering. But the driving force behind their support of the space is their belief in the potential of MIT students to change the world. “The one way to get good at innovation is to do it, again and again,” says Huang. “This facility provides a place to test high-risk ideas in a low-risk environment. It allows students to translate and test their ideas sooner rather than later, while they are still drinking from the MIT fire hose.”

Huang and Hobbs also see this makerspace as a place where students can grow into their leadership capabilities by spearheading projects and having full ownership of any intellectual property developed using the facility. “Lots of people have great ideas, but there is still a lack of diversity in the founder and leadership communities of both of our industries. All MIT students have access to the Huang-Hobbs BioMaker Space, giving them a place to practice their passions. It is our hope that this will also enable valuable invention and open doors to the path of leadership,” says Huang.

Student activities in the space range from one-day workshops to longer-term research. During this year’s Independent Activities Period (IAP), MIT BioMakers offered a workshop on biological robots, which use living cells to sense, process, and respond to their environments. IAP participants met twice a week to learn more about tissue culture by making rings of muscle tissue able to generate a force around a soft skeleton.

MIT’s 2021 student team at the International Genetically Engineered Machine Competition (iGEM) found the space an ideal location to work on their entry: targeting a therapeutic probiotic for maple syrup urine disease, a genetic condition that prevents the body from breaking down certain amino acids. “iGEM teams are student-driven and student-engineered,” says Buck. “They pick their project and direction, do the actual lab work, and put together a wiki and website to present the project.” 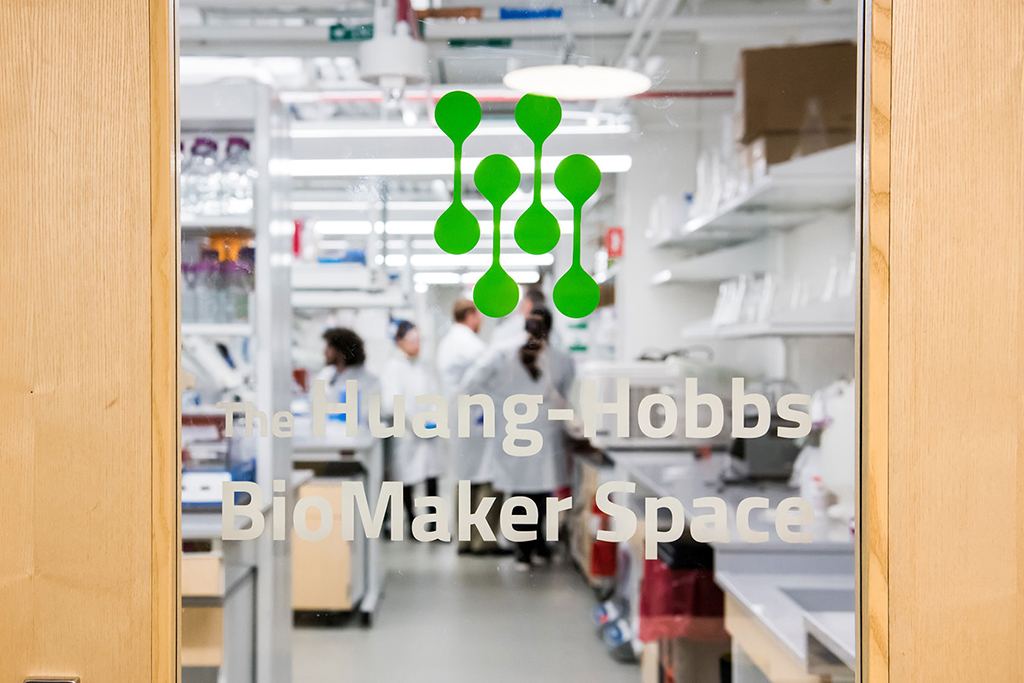 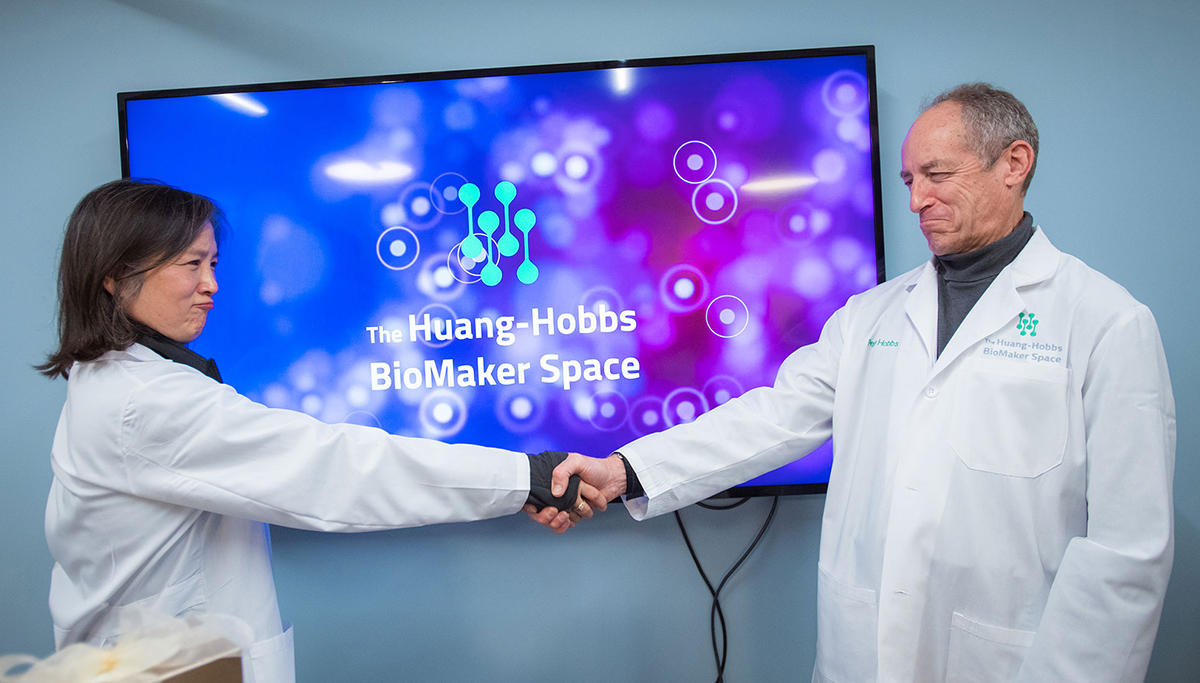 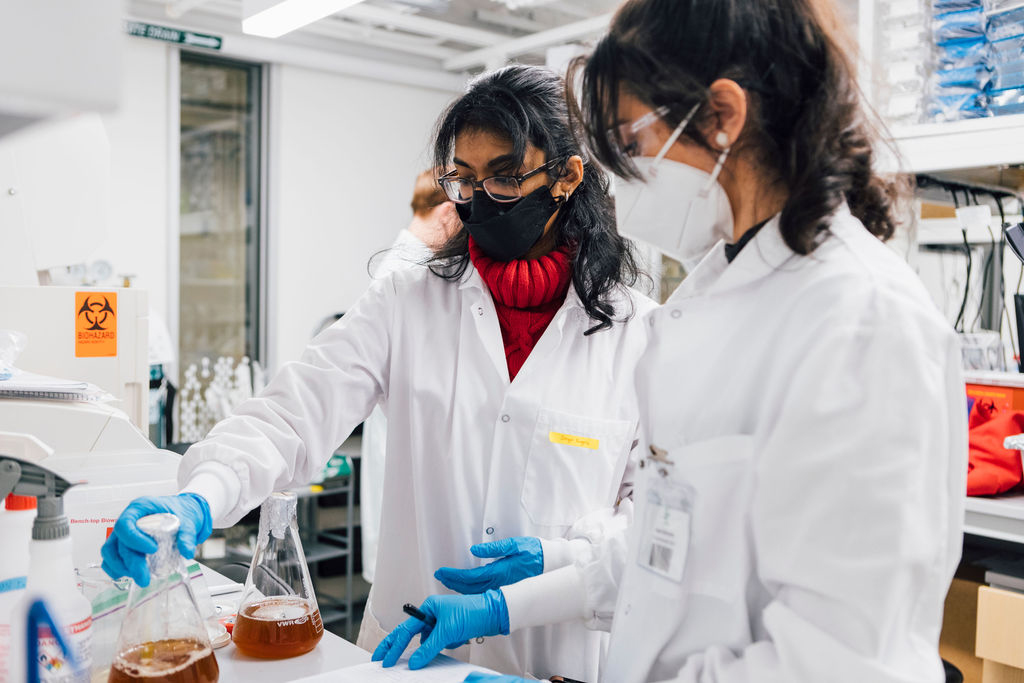 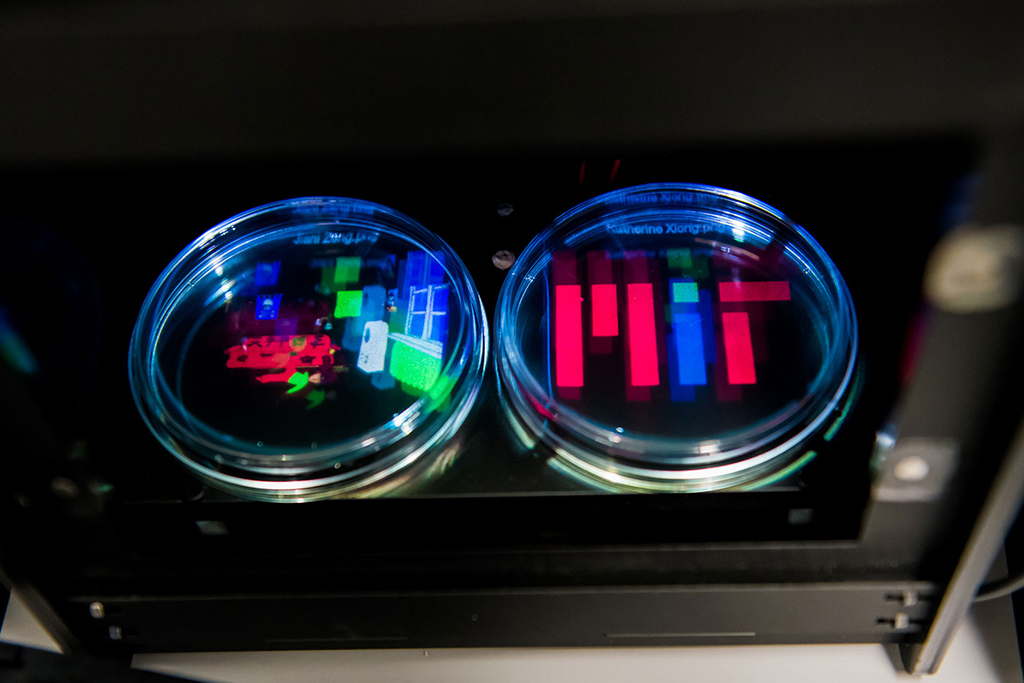 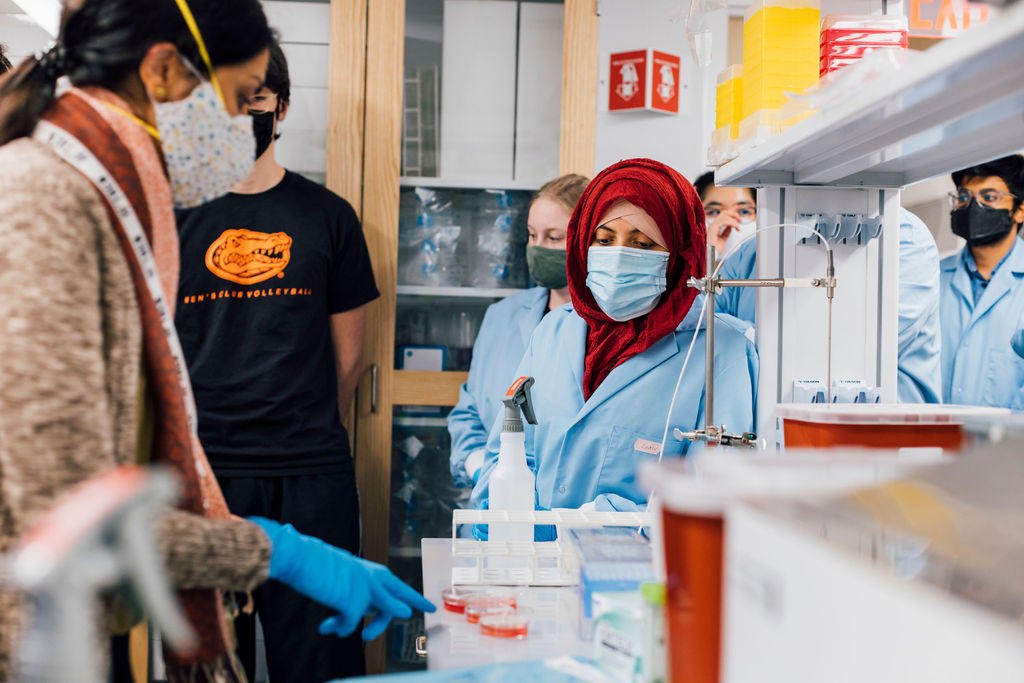 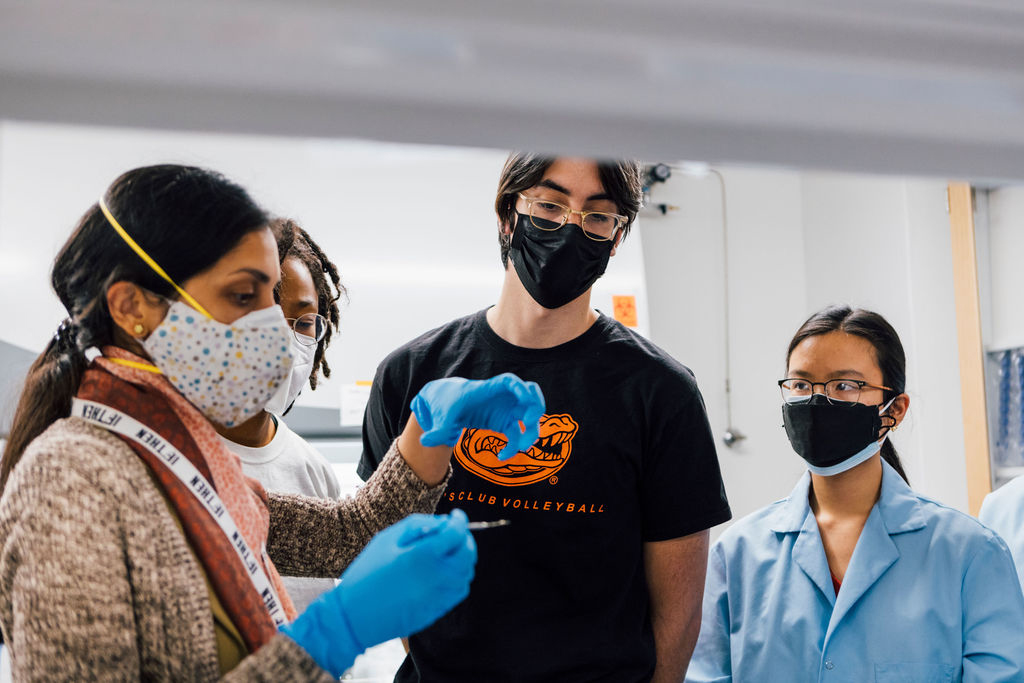 One of the most active projects in the space is a search for synthetic alternatives to cement for use in construction. Graduate students from the MIT School of Architecture and Planning, bringing a wealth of knowledge about building materials and sustainability challenges in construction, have joined forces with biological and mechanical engineering students in a quest to improve or modify the environmental conditions of manufacturing cement, the binding ingredient in concrete.

“Cement gets a lot of attention because it is one of the biggest emitters of carbon dioxide,” explains Buck. “It’s formed at high temperatures from the chemical reaction of a couple of minerals, and producing it uses a lot of fossil fuels.” Potential applications of a biocement substitute include using this “programmable mud” as raw building material, or for soil stabilization in the face of climate change and erosion.

Faculty members share the students’ enthusiasm. “It’s such a privilege to have biological engineering serve as a catalyst to bring together a community of researchers at the forefront of invention and creativity using biological systems to address societal needs,” says Angela Belcher, head of the Department of Biological Engineering and the James Mason Crafts Professor of biological engineering and materials science and engineering. “We are pleased to offer access to laboratory resources, a range of programming, and a home to a community of enthusiastic BioMakers.”

Paula Hammond ’84, PhD ’93, head of the Department of Chemical Engineering and Institute Professor, agrees. “One of my primary goals is to ensure that all our students experience the most exciting aspect of our discipline: the opportunity to make real things that have the potential to change the world,” she says. “The BioMaker Space is a critical component of this effort, giving students a safe place to explore their own ideas, be inspired by peers, and connect with the broader MIT entrepreneurial ecosystem.”

Buck is proud that the Huang-Hobbs BioMaker Space supports students with a wide range of experience and interests. “The pinnacle of our system is a project for a senior who wants to start a company and keep their intellectual property,” he says. “But it’s key that we have programs accessible to first-year students who have never picked up a pipette, and to students from other disciplines—that’s a critical part of our mission.”