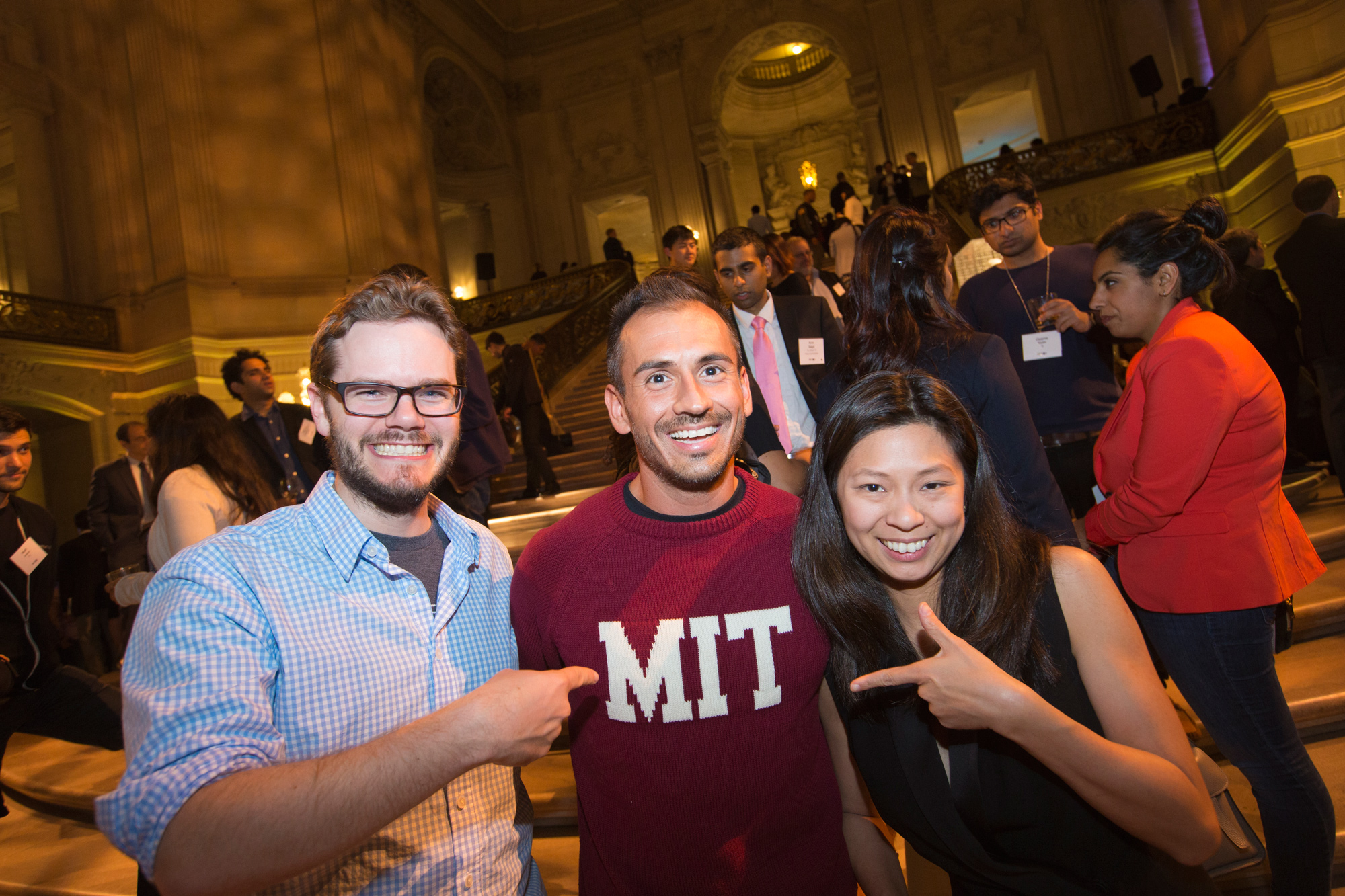 This article originally appeared on MIT News on November 7, 2016.

On the evening of November 2, MIT history was made at San Francisco’s City Hall, with the largest-ever gathering of MIT alumni in California, more than 800 alumni and guests. As the high-tech capital of the world and home to many MIT-founded companies, the Bay Area was a perfect place to celebrate MIT’s newly launched Campaign for a Better World. The city is one of several included in a global Better World tour to engage the MIT community in this historic effort.

“At MIT, I was literally living in the future,” Houston said, noting that it was the incredible connectivity of the MIT campus and tools like Project Athena that inspired him to create Dropbox. He also reflected on MIT’s entrepreneurial legacy: “You can’t go a day, maybe even an hour, without touching something created by an MIT inventor or MIT entrepreneur.”

President Reif began on a note of levity when he congratulated the sold-out audience for topping the attendance of last month’s packed Better World event in New York City. He described MIT’s distinctive approach to transformational education, cutting-edge innovation, and trail-blazing research, and added that the evening’s guest speakers were living examples of this approach, aimed at making a better world.

Anthony Sagneri SM ’07, PhD ’12 described his path from mission commander in Afghanistan to MIT Sloan Schoool of Management student and entrepreneur in power technologies. Sagneri said it was in large part “MIT’s culture of perseverance and flexibility” that enabled him and his classmates to found a successful company, FINSix, and develop a revolutionary product, the Dart—the world’s smallest laptop charger. Following Sagneri to the stage was Joi Ito, director of the MIT Media Lab, who spoke about the tech industry’s success in conquering everyday problems such as hotel bookings and ridesharing services. MIT’s gift, he said, is excelling at big problems, especially “uncomfortably difficult problems” in human health, clean energy, and space exploration. Ito shared his excitement about the recent launch of The Engine, a new MIT incubator designed to speed powerful ideas from MIT labs to the marketplace, and enhance problem-solving capabilities for today’s toughest technological challenges.

The evening wrapped up with Nergis Mavalvala PhD ’97, the Curtis and Kathleen Marble Professor of Astrophysics. Last year, Mavalvala and her colleagues were the first in the world to detect gravitational waves, confirming predictions first made by Albert Einstein a century ago. By investing in rigorous basic research like Mavalvala’s, the Campaign will lay the groundwork for future breakthroughs yet to be imagined. “At MIT,” she said, “what we love about discovery is that it only leads to more questions.”

Earlier in the evening, President Reif invited the audience to consider just how much the MIT community can achieve by investing in visionaries like Sagneri, Ito, and Mavalvala. “What would it be worth,” he asked, “to make their dreams for humanity, come true? . . . Would it be worth committing ourselves … and finding others to join us … to make a collective investment of $5 billion dollars?”

The answer, he told the audience was, “Five billion times yes!” Reif then extended a personal invitation to the assembled guests to join him in making a better world—a request that was answered with applause and cheers.

The Better World tour heads to Hong Kong on Dec. 14 and to London on Jan. 13. To learn more about upcoming Campaign events near you and how you can join in the Campaign for a Better World, please visit betterworld.mit.edu/engage.