MIT graduate student Annauk Denise Olin didn’t grow up speaking Iñupiaq, the language of her Alaska Native community. Nevertheless, she’s raising her son in the language — thanks in part to the grounding in linguistics she is gaining through the MIT Indigenous Language Initiative (MITILI), a master’s program for members of communities whose languages are threatened.

“The beauty of the Iñupiaq language is that the perspective and the wisdom of my ancestors has been preserved in the language,” says Olin, who is developing a curriculum for teaching Iñupiaq through MITILI. “If we lose our language, we lose our ability to see into the minds of the people who were able to thrive — for millennia — in one of the harshest climates in the world.”

That climate has been rapidly changing in the last two decades, with disastrous consequences for Olin’s family’s village, Shishmaref. A small community of about 600 people, Shishmaref is perched on tiny Sarichef Island just south of the Arctic Circle — a place where reduced sea ice, melting permafrost, and other impacts of climate change have come to threaten the community’s very existence. The effect of global climate change on Shishmaref is seen as among “the most dramatic in the world.”

“We’ve had several homes fall into the ocean. We’ve lost hundreds and hundreds of feet of land on our island. Historically, we would expect sea ice to form around our island in September or October. In the last few years, we had winters where sea ice would not form until January. This should serve as a warning to the rest of the world,” says Annauk, noting that the village has sought federal help to move to a new location — so far in vain. 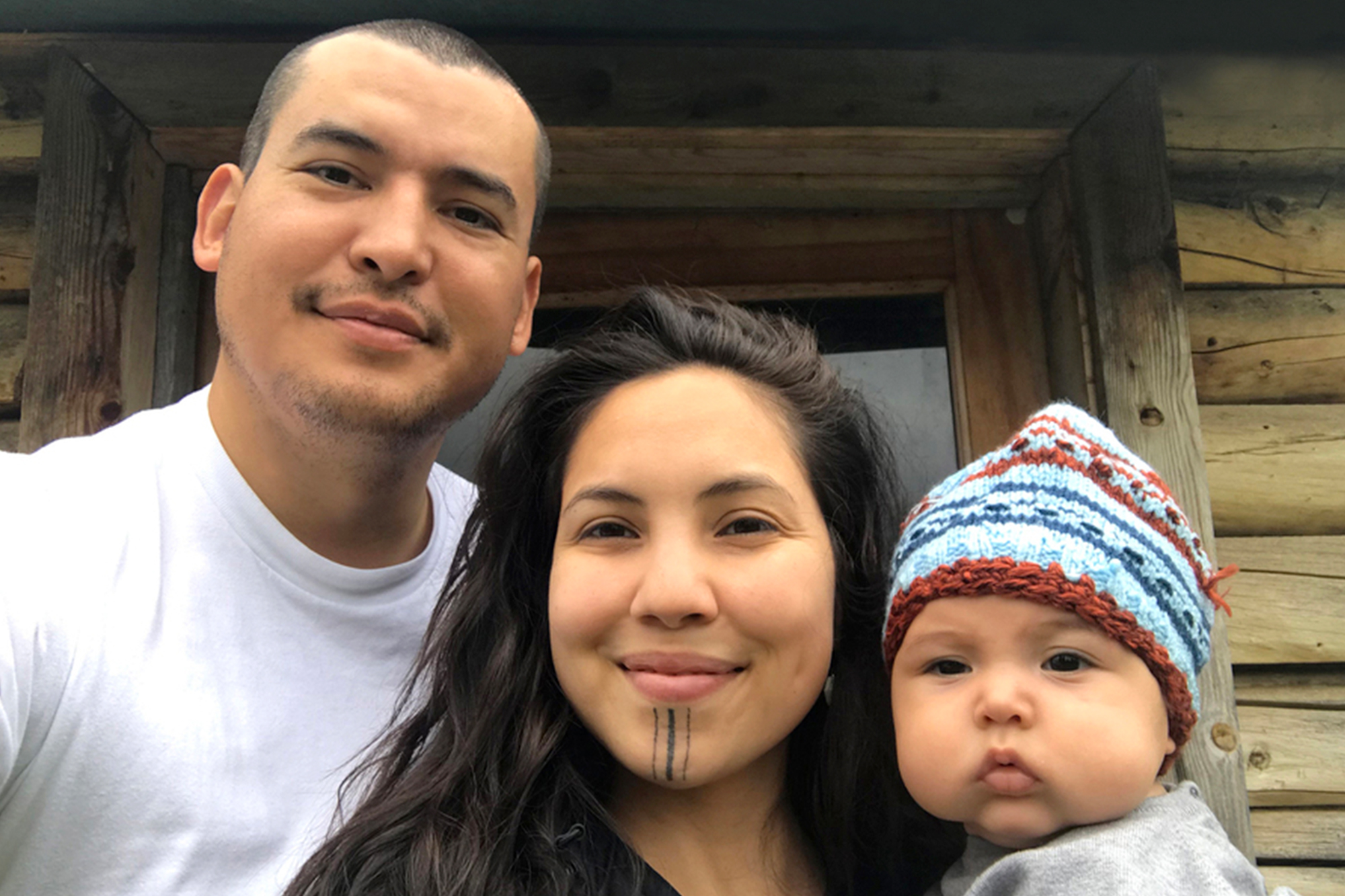 Helping her community to navigate the huge challenges presented by climate change is a key motivator for Olin, who started learning the Iñupiaq language intensively in 2016. At the time, she was working full time at the Alaska Institute for Justice (AIJ), a nonprofit dedicated to protecting the human rights of all Alaskans. As the research director of the AIJ’s climate change research and policy center, she worked with 15 Alaska Native villages (including Shishmaref) to begin developing a community-led relocation governance framework.

She says that language issues can present a barrier to such projects because elders in Alaska Native communities are not always fluent and literate in English, and the government rarely communicates in Iñupiaq. In fact, just this past January, Olin and members of the native village of Shishmaref partnered with the Alaska Public Research Interest Group to help produce census materials in Iñupiaq to fill this gap.

“Alaska has been historically underrepresented in the census,” she says. “We created public service announcements with speakers of Alaska Native languages to get more Alaska Native people to participate in the census so we can get adequate funding for our communities.”

A language shaped by the Arctic

Olin began teaching Iñupiaq after just one year of study at the Alaska Native Heritage Center in Anchorage. “Teaching and learning a language at the same time is very challenging and time-consuming, but it’s common for second-language learners of endangered languages,” she says. One thing she’s learned so far is that Iñupiaq has almost 100 different terms for ice, but not for all of the conditions that people see today in Alaska; essentially, words fail to convey the devastation that climate change has wrought on the Arctic landscape.

“The Iñupiaq language has a complex and robust lexicon related to ice conditions in part because it is linked to our survival. If you’re out hunting and you aren’t able to describe to your hunting partner whether the ice is stable enough, it could cost your lives,” she says. “With climate change, some elders don’t have in their vocabulary words to describe how the ice is changing, so I think what’s important in the future is for us to be able to adapt the language to be able to describe these changing conditions exactly.”

For Olin, that means there need to be more young Iñupiaq speakers. “We need resources to teach in the language so that we have an upcoming generation of speakers even after our beloved elders pass on,” she said, noting that she is hoping her efforts will help undo the damage done by missionaries and the U.S. government, which for more than 100 years forced Iñupiat children to speak English in school.

A foundation in linguistics

Olin is beginning this work at home by speaking Iñupiaq to her son. “When I speak English to my son, it feels like a watered-down version of love, but when I speak Iñupiaq to him, the connection I feel with him is much stronger and intimate.”

To ensure that she is using the language properly, she is working with a mentor, native speaker Edna Ahgeak MacLean, a former faculty member at the University of Alaska Fairbanks and former president of Iḷisaġvik College. MacLean, who has produced both an Iñupiaq dictionary and a grammar, has helped Olin to script conversations so that she and her husband (a tribal member from another Alaska Native group, the Koyukon Athabascan, who speak Denaa’kke) can engage in simple activities — such as making pancakes — while conversing entirely in Iñupiaq.

At the same time, Olin is developing a curriculum for teaching Iñupiaq through her work at MITILI. Inspired by the work of the late MIT Professor Ken Hale, who dedicated his career to the study and support of indigenous languages of the Americas and of Australia, MITILI is a two-year program that provides a full scholarship that covers tuition, fees and health insurance, plus a stipend.

Olin is taking linguistics classes and working with her MIT advisor, Professor Norvin Richards, to gain an understanding of phonology, syntax, and language acquisition. “Some of the critical materials my mentor has written use many linguistic terms and concepts,” she says. “It has made a huge difference to be able to understand what tools are available to break down a lot of these linguistics-heavy resources.”

For example, Richards has helped Olin better understand how to combine morphemes, the smallest units of meaning in a language, to create words. “There are complicated rules that must be followed and practiced to correctly string morphemes together in Iñupiaq,” she says. For instance, in Iñupiaq it’s common for a morpheme to be attached to a word stem to indicate an action or state of being, a function usually performed in English by a verb.

“One of the things I appreciate about Annauk’s work on Iñupiaq is how intellectually omnivorous she is,” says Richards, who has for decades worked to help revive endangered languages, including Wampanoag, a native language of Eastern Massachusetts, and Lardil, an Aboriginal language of Australia. “She’s able to build on very careful work by the great Iñupiaq scholar Edna Ahgeak MacLean, but she’s clearly determined to develop a language program that incorporates every technique that she thinks will work.”

Noting that the indigenous languages of the United States are all threatened, Richards says Olin is doing work that is critical to maintaining the world’s linguistic diversity — learning Iñupiaq “through sheer force of will.” “She’s tireless and dedicated, and very smart,” he says. “It’s a real privilege to get to work with her.”

Supporting students like Olin has been the central mission of the MITILI since its founding in 2004. “The goals of the MITILI are ones that Ken Hale spoke and wrote about, eloquently and often,” Richards says. “One is to improve our understanding of the languages of the world, not by subjecting indigenous languages to study by outsiders, but by offering indigenous scholars ways to study their own languages with the tools that academic linguists have developed. And another, at least as important, is to try to help indigenous communities give their traditional languages their best chance of long-term survival.”

Olin’s ultimate goal is to fulfill this mission for her community, and her initial plan is to create an Iñupiaq mentor-apprenticeship program. “I’m also very interested in creating a school where the mission, leadership, and content is driven by Iñupiaq people and community — where we learn the language but also how to harvest and process traditional foods, sew traditional clothing, and most importantly, how to treat one another as human beings,” she says.

“As an Iñupiat, it is my responsibility to help provide a place where young people can have access to their identity and culture,” Olin says. “Many of our Iñupiat people are working to overcome historical trauma. Language is a powerful medicine that will help heal our communities.”

This story was prepared by MIT School of Humanities, Arts, and Social Sciences staff Emily Hiestand (editorial and design director) and Kathryn O’Neil (senior writer) and originally appeared on MIT News on September 25, 2020.